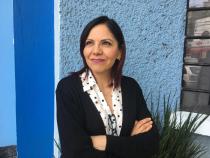 (Photo by Jorge Valencia)
Olga Trujillo is the founder and director of the women's sports website Diosas Olimpicas, Spanish for Olimpic Godesses. 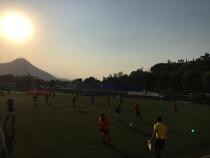 In Mexico, the fight for women’s equality hit a milestone this year. For the first time, the country saw female athletes play in a professional league of its most popular sport: soccer.

Pumas, one of Mexico City’s teams, plays in a lush field at the bottom of a quarry. On a recent Saturday, 800 people showed up to watch the home team against out-of-town visitors Monarchs.

Just off the field, Olga Trujillo, an independent journalist, is capturing the game on her cell phone and broadcasting it over the Internet.

Trujillo runs a website called Diosas Olimpicas, or in English: Olympic Goddesses. She started it, she said, because she didn’t see women’s sports getting the attention they deserve. For example, through live broadcasts, she said.

"I started to make online broadcast because people asked me to do it,” Trujillo said.

Trujillo herself grew up in Mexico City playing basketball. But her mother expected her to stay home mopping floors and cooking for her brothers, so playing sports was like an act of rebellion, she said.

She would hide her gym clothes near the front door so her mother wouldn’t see them, she said. And she would leave for school in enough of a hurry for her mother to notice what she was taking with her.

Trujillo grew up to become a reporter at Record, a major newspaper covering men’s soccer. She remembers affectionately the day she persuaded her editors to publish a profile she wrote about an exceptionally promising soccer player who happened to be a 13-year-old girl.

Eventually, Trujillo quit her job and started her website, which doesn’t earn her any money, at least for now.

As she’s webcasting the Pumas versus Monarchs game, one of her Internet followers asks why they’re playing on a practice field -- instead of the stadium where the men’s team plays.

Note all teams in the league played in the stadiums where their male counterparts regularly play. Conditions for female athletes have come a long way but are still not the same as they are for men.

"Yeah, in my time, there were all kinds of myths about women participating in rough sports,” said Andrea Rodebaugh, a former player for Mexico’s national team and now the coach for the professional women’s team from Tijuana.

Rodebaugh gave a list of myths some people still believed when she began playing soccer: "If we controlled the ball with our chest, we would get breast cancer. If we ran too hard or too intense, we would become infertile. You know, in Germany, until 1971, they justified women not playing because kicking was not proper for women. Women should not be kicking."

Back then, Rodebaugh said, she had to fight for the right to play. Now, she said, players are fighting so they can make a living from the sport.

The first half of the first season wrapped up this weekend, and the official statistics are promising: The best attended game attracted almost 25,000 fans, and the most popular team in the league averaged almost 8,000 fans per game.

“All the girls in the country who don’t have a place to play soccer, now they have a goal to get," Rajunov said. She added she would like her team to get the same attention as the men’s: "In televisions, newspapers. Everything."

On the sidelines of the Pumas versus Monarchs match, Trujillo, the independent journalist, narrates and comments on every goal.

Sometimes Trujillo thinks about the story she wrote about that 13-year-old prodigy. That girl -- Charlene Corral -- grew up to play in the national women’s team and now plays professionally in Spain.

"I feel like I did a success thing, also,” Trujillo said. “I am part of the story because Charlene Corral represents what I would like that many girls represent to others."

Trujillo said that’s the kind of example she wants for her own daughter. And she said that’s why she’ll be there, on the sidelines, when the second half of the season begins next year.