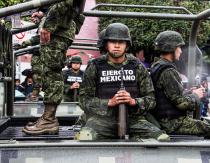 Courtesy: Wikimedia Commons, © Tomas Castelazo, www.tomascastelazo.com
The Mexican army might face important changes on the way it operates under the so-called Law of Interior Security.

MEXICO CITY — Mexico has a new law to facilitate its military’s actions against organized crime. However, its detractors fear the new law would allow the militarization of the country.

On Thursday, Mexican President Enrique Peña Nieto signed the so-called Law of Internal Security but said he will wait for the Supreme Court’s rule determining its constitutionality before he enacts it.

The Mexican army has operated for years in areas with high levels of drug-related violence, like in some parts in the border. Some members of the military had complained in the past about the lack of a legal framework to protect them, as they face accusations for misconduct from civil-rights groups.

The Law of Internal Security is an attempt to regulate the military’s interventions and expedite its operations whenever crime seems to surpass local forces. Under this new rule, the president can deploy the army under situations considered as "dangerous" for public safety. Local governments would be authorized to request support from the military.

Several Mexican secretariats, as well as the Attorney General’s Office, have applauded this law.

But the United Nations and civil-rights groups like Amnesty International oppose: they say it will open the door to more abuses from the military, while leaving local authorities and citizens behind.