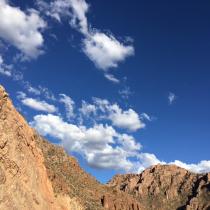 Laurel Morales
Apache Leap Special Management Area sits above the town of Superior. The Tonto National Forest will monitor the impacts of mining and manage the historic site.

The federal government has finalized plans to swap land with a southern Arizona copper mine to protect a historic site near Superior.

In the late 1800s, a band of Apache warriors discovered a secret trail to the top of a mountain and camped there in attempts to protect their land from white settlers.

After several weeks, the cavalry discovered their path and attacked the Apaches. The survivors saw they were surrounded, and rather than surrender, turned to the edge of the steep cliff and jumped to their deaths. Today, this place is called Apache Leap.

Twelve tribes worked with the Forest Service and a mining company to save Apache Leap.

Resolution Copper will give 142 acres of privately held land and forgo 697 acres of unpatented mining claims that will become the Apache Leap Special Management Area.

But some worry another sacred site, Oak Flat, remains vulnerable to mining.