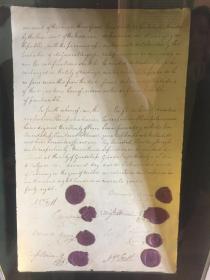 Rodrigo Cervantes
A replica of the Treaty of Guadalupe Hidalgo.

To commemorate Arizona’s birthday, we dispatched our reporters far and wide to bring you stories from the region you've probably never heard before.

Arizona celebrates its statehood this month. But this year is also the 170th anniversary of the war treaty that made it part of the United States.

Almost two centuries ago, the United States fought a gruesome war against Mexico and annexed a vast territory that includes Arizona. What does Arizona mean to Mexico nowadays, considering the past, but also the present and future?

The Castle And The Pride

Uphill in Mexico City, a landmark survives as silent witness of a battle held here in 1847 that marked the fate of Arizona and other territories from the Southwest.

“We are in the middle of the city, this place is inside a forest, the Forest of Chapultepec, and it is a castle, basically,” said Jaqueline Gutiérrez, spokeswoman from the National Museum of History.

On the ceiling of the museum, known by many as the Chapultepec Castle, a mural depicts the war between Mexico and the United States, specifically a moment recorded in Mexico’s imaginary of the invasion: a young Mexican cadet jumping off to his death from the Chapultepec Castle wrapped in his nation’s flag, as a way to protect it from the American troops.

It was here at the castle where Mexicans lost their last battle against American invaders. Mexico was just 25 years old back then, unstable internally while fighting continuous invasions from overseas. The United States was consolidating itself as a world superpower.

Gutiérrez thinks most people in Mexico will never forget the invasion — and especially nowadays, under the Trump administration. 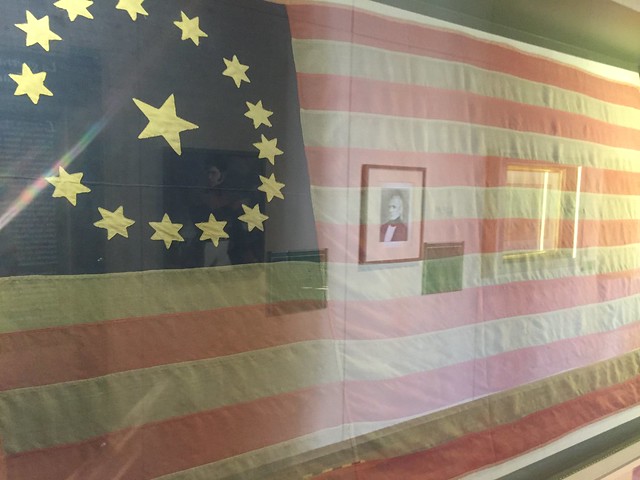 Back then, Mexico lost more than half of its land with the Guadalupe-Hidalgo treaty signed in 1848 — what became most of the southwestern United States, including the separationist state of Texas. And, a few years after, during the Gadsden Purchase, the American government bought from Mexico the flatlands south of Phoenix to build a railroad.

Gutiérrez said it’s just a thing from the past — but with lessons for both sides.

“At the end of the day, we need Americans, and Americans need us,” Guitiérrez said.

In southern Mexico City, an old convent from the Colonial era was turned into a museum for its significance during the American invasion.

(Video by Rodrigo Cervantes and Jackie Hai - KJZZ)
Hear from a re-enactor of Mexico's former president Antonio López de Santa Anna about the battle fought at the Convent of Churubusco in 1847.

At the former Convent of Churubusco, now the National Museum of Interventions, another important battle was fought in 1847.

The resistance to the American invasion is remembered here with bagpipe music from The St. Patrick's Battalion Pipes & Drums band. It is a Mexican band named after a group of Irish immigrant soldiers that deserted the U.S. Army after suffering discrimination and mistreatment. The Saint Patrick’s Battalion — or Los Patricios — fought its last battle here, along with the Mexicans.

But the ties between this place and the current American Southwest goes beyond.

Aymara Nishimura works at the National Museum of Interventions and said many missionaries departed from here during the Spanish rule to open monasteries at Asia and the current American Southwest. “It’s curious, but the Franciscans opened missions in spots that would become relevant and strategic, for example, The Álamo,” Nishimura said.

The facade of the former convent still has bullet holes from the battle between Mexicans, Americans and “Patricios.” But the expert thinks this place also reminds the scar Mexico bears after losing to the United States.

“The land was divided, and so were the families,” Nishimura said. And for her, the current migration frictions are just an effect of that separation.

She thinks the war was also the birth of a forceful, yet necessary friendship between both nations.

Her colleague at the museum, Dolores Nájera, thinks the birth of cultures in what used to be northern Mexico was also a logical process that has evolved currently with continuous migrations.

“Back then, territories like Arizona and others began to generate their own identities in different different directions to what was Mexico. So I think it was a natural course in history," said Nájera.

Nájera said she also hopes that Americans and Mexican-Americans look for their connections with Mexico, regardless of what they hear or think about the country and the past.

"Mexico is not just corruption. It is not only insecurity," said Nájera.

And while some segments in the Mexican society still hurt with the wound brought by 19th century conflicts with the United States, others are more concerned about modern-day tensions, included those brought by Arizona’s State Bill 1070 and former Maricopa County Sheriff Joe Arpaio’s tactics. (Photo by Rodrigo Cervantes - KJZZ)
Lorenzo Meyer at his office.

“There are states in which there is no good will towards Mexico — and Arizona is one of them. Sheriff Arpaio is a real product of some segments of the Arizonan society that dislike neighboring Mexico,” said Lorenzo Meyer, a well-known researcher in Mexican politics specialized in U.S.-Mexico affairs.

Meyer said Mexicans and Americans have to accept that the border can’t be arbitrarily closed. Both nations need to solve shared problems, like drug and weapon trafficking — and be accountable with the original inhabitants of the border states.

“Mexicans fought against Native Americans, as well as the U.S. In Sonora and Arizona, we have the Yaquis. We took their land and made their life miserable,” Mayer said.

According to the professor, Mexican nationalism was built around the relationship with the United States, but the fact remains that Mexico is under the shadow of its neighbor in the north — a situation that has worsened after President Donald Trump’s rhetoric.

“We have to deal with this unpredictable presidency that has decided for internal political purposes that to bash Mexico is profitable from the political point of view,” said Meyer. “Mexico has many internal problems, and we have to add the external problem now.”

But some others see opportunities in the modern-day relationships between both countries and within agreements that Mexico has with individual states, like Arizona.

Juan Carlos Romero Hicks is one of them. He is a federal senator from the state of Guanajuato, one of Arizona’s current closest partners in Mexico. He addressed the local and House legislations of Arizona last year.

He’s optimistic, but thinks President Trump’s actions towards Mexico has put salt on the open wounds of the 1800’s conflicts. “Unfortunately, [the wound] is still present. We had the Texas separation in 1836 and then the Mexico-U.S. war in 1847, when over half of Mexican territory was lost. When you refer to the connection between these two great nations, it’s always a point of conversation,” said Romero Hicks.

“We need to build bridges. We need to dream together. We need to share projects. Divided we are not going to stand,” said Romero Hicks.

The United States and Arizonans need to embrace its relationship with Mexico, including immigration, which is part of their DNA, he said. Romero Hicks even recalls that he is a descendant of an American immigrant in Mexico.

“There’s always the history, the culture, the commerce, and now going to a new horizon, we need to look at a new agenda: education, science, technology, innovation, water, infrastructure, security and, obviously, democracy,” Romero Hicks stated.

Romero Hicks said the history between Mexico and the United States has been too complex — and perhaps it’s time for both nations to write the new chapters of it.