The Wishing Shrine honors El Tiradito, the castaway. The most popular legend tells of a young man who had an affair with his mother-in-law.
Laurel Morales - KJZZ
By Laurel Morales
February 09, 2018
Tweet

In Tucson’s Barrio Viejo, or old neighborhood, evidence of the city’s Mexican heritage is everywhere. Visitors come from all over to eat tacos, to admire adobe architecture, and if they know where to go, they can make a wish too at El Tiradito.

If you’re not paying attention, you’ll walk right past the humble shrine. It’s in a dirt lot beside a popular Mexican restaurant. Step inside the alcove and you’ll notice the smell of wax. Decades upon decades of burning candles have built up a thick wax floor. Take another step and you’ll see little folded up pieces of paper — the wishes — tucked inside the adobe wall that lines the back of the shrine.

On a recent sunny afternoon a group of Cub Scouts descended on the shrine to make wishes. Eight-year-old Enrique Marrufo and his dad placed a candle in one of the wrought iron candelabras. Marrufo said, he wished for money to buy toys.

Laurel Morales - KJZZ
A look around the Wishing Shrine of El Tiradito.

Legend has it, if his candle stays lit all night, the wish will come true. Enrique’s dad Jesús Ricardo Marrufo remembered asking the wishing shrine for a lot more, when he was his son’s age.

His candle must have gone out because he didn’t get the car. Jesús grew up in the neighborhood and remembers his grandmother telling him the story behind the shrine. It goes something like this:

In the late 1800s Juan Oliveras married the daughter of Francis Goodwyn, a powerful rancher. But Oliveras fell in love with his mother-in-law and the two had an affair. One day the rancher caught the lovers in Goodwyn’s own bed and killed Oliveras with an ax. In her grief the mother-in-law buried Juan where he died.

He’s called El Tiradito — or the castaway — because as a sinner he could not be buried by the Catholic Church in consecrated ground.

“It gets convoluted,” said Abraham Cooper who is writing a book about El Tiradito. “It’s very much like a (tele)novella.”

"People come here to leave wishes, and actually pour their pain and sorrow into this place."
— Abraham Cooper

For the last dozen years Cooper has made it his mission to find out what really happened here. And he recently found a lead: a newspaper article from 1877 about a man who murdered his stepfather not far from here.

But Cooper said he’s discovered something more important about the Wishing Shrine.

“Whether or not a person was actually murdered here ends up becoming secondary to the fact that people come here to leave wishes, and actually pour their pain and sorrow into this place,” Cooper said. And Cooper said the name “El Tiradito” describes more than the man the shrine honors.

“In a kind of poetic sense it embodies a lot of the feelings,” Cooper said. “This particular location and the character, this figure of El Tiradito, is sort of a symbol for what happened in this neighborhood on a larger scale.”

In the 1970s the city had plans to build a road through here. It was part of a large-scale urban renewal project that bulldozed many people’s homes and businesses in el barrio. But retired University of Arizona folklorist Jim Griffith said his predecessor Byrd Howell Granger brought the road project to a halt when she applied and successfully listed the shrine on the National Register of Historic Places.

“It unified los Tucsonenses and made them feel they had power because nobody thought this would be possible,” Griffith said.

Griffith has recorded more than 20 different versions of the legend of El Tiradito — everything from complicated love triangles to a man struck and killed by a bullet while walking past a bar-room door.

“The stories reveal not so much something about what happened, but they reveal a heck of a lot about the culture that tells the stories,” Griffith said.

Griffith said, it’s like any other shrine or saint the people pray to. They are just trying to control the uncontrollable. 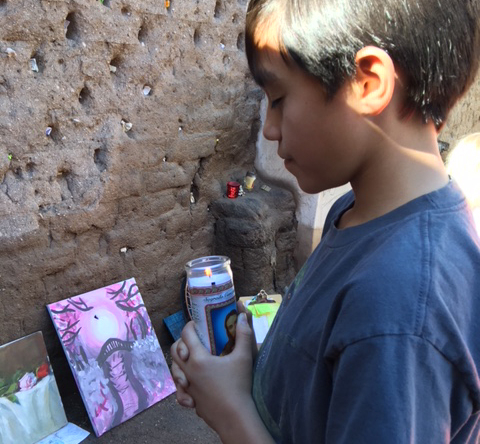