For the past six years, nearly 800,000 immigrants brought to the United States as young children were given a temporary reprieve from deportation that was slated to be repeated every two years. When the program was halted last September, former President Barack Obama wrote: "This is about young people who grew up in America — kids who study in our schools, young adults who are starting careers, patriots who pledge allegiance to our flag. These DREAMers are Americans in their hearts, in their minds, in every single way but one: on paper."

Even before then, DREAMers were at the center of nearly every immigration plan introduced on Capitol Hill. They've been weighed as bargaining chips for a $25 billion border wall, a cornerstone of President Donald Trump's campaign, and they've been caste as a costly expenditure in the bitter recriminations of the past two government shutdowns.

President Trump warned that Congress was running out of time to decide what to do with DREAMers, writing via Twitter, Feb. 13:

Negotiations on DACA have begun. Republicans want to make a deal and Democrats say they want to make a deal. Wouldn’t it be great if we could finally, after so many years, solve the DACA puzzle. This will be our last chance, there will never be another opportunity! March 5th.

By last Thursday, most of those negotiations came to an end, leaving Dreamers stuck at the impasse with the March 5 deadline weeks away.

The Fronteras Desk spoke with DREAMers in Mexico and in Arizona who have stopped waiting for Congress and are now looking beyond the 2012 words of President Obama when he said: "This is a temporary stopgap measure that lets us focus our resources wisely while giving a degree of relief and hope to talented, driven, patriotic young people. It is the right thing to do."

You will hear from young business owners in Phoenix, worried realtors who see successful home buyers slipping away and young people who have already left this country, returned home and taking their talents and ambitions with them. Lorenzo Santillan hooked his food trailer to his truck. The father of two was running on just three hours sleep, and it had already been a busy morning.

First he worked on his generator that powers the food trailer. Next he ran to the store for ingredients. Then he had to get the trailer to downtown Phoenix for the lunchtime business crowd.

Santillan is in the Deferred Action for Childhood Arrivals (DACA) program, and there’s a link between his immigration status and his company’s name.

“It stands for neither here nor there,” he said.

Santillan doesn’t consider himself to be from Mexico or Arizona, even though he’s lived in the Grand Canyon State since he was baby, and has no idea what life is like south of the border.

“The way I see it is I travel to Mexico through the food,” he said.

The prospects of long-term success for Santillan’s business are blurred by the uncertainty of what’s to come. DACA recipients are at the center of the debate over immigration reform, and some "Dreamers" have described the back-and-forth fight between Democrats, Republicans and President Donald Trump as exhausting. In the meantime, Santillan is doing what his parents did 30 years ago — looking north.

“My solution is moving to Canada,” he said.

Arizona stands to lose a lot if Santillan leaves and others follow. Arizonans eligible for the DACA program made a combined $438.2 million in 2015, and they paid $66.3 million in taxes, according to New American Economy.

“Why do I need to be in a country that doesn’t accept me?” Santillan said. DACA recipients haven’t been closing their accounts, Romano said. But switching to paper money is a sign of someone taking their finances underground.

“The reasons for that seem to be pretty clear,” she said. “They are scared about what is going to happen to them in the future.”

With his food trailer parked, Santillan and his hired help got to work preparing the day’s menu. But cooking wasn’t his first career choice.

Santillan was on the team of Carl Hayden Community High School students who beat the Massachusetts Institute of Technology in a robotics competition. The underdog story is so good someone played Santillan in a movie. But Arizona law against in-state tuition for undocumented people kept him from becoming an engineer.

Victoria Cruz, a loan officer with Fairway Independent Mortgage Corporation, has worked with DACA recipients in California and Arizona.

“I’ve personally noticed that the market’s gotten quieter,” she said. “I think there is fear out in the market.”

Some clients wrongly assume their DACA status is a deal breaker, Cruz said. Or that Cruz’s office will contact immigration authorities.

Cruz has also worked with successful DACA recipients who wanted to buy homes for their parents.

Santillan grinned as he served a customer a folded tortilla oozing melted cheese and meat. His DACA permit won’t expire until 2019. But there’s an 80 percent chance Santillan will move himself and his business to Canada this year, as long as he can do it legally.

“I don’t feel like it’s fair what’s happening,” he said. “So I can sit here and cry about it, or just do something about it.”

Santillan admits he doesn’t know where to settle in Canada, or how to cope with winter after living in the desert all his life. But he’s still optimistic.

“Maybe Canada is going to accept me even more,” Santillan said. “Maybe I’m going to have more success because there is not a lot of Mexican food out there.”

Santillan wants to become a U.S. citizen. He’d gladly stay near his family and kids, if leaders can strike a deal. But in the meantime, he’s preparing like they won’t.

“I’m having to wait on somebody [who's] playing with my life,” he said. “And that’s not right.”

In Mexico, DREAMers Returning To Look For Acceptance Elusive In The United States About a year ago, Eddie Barrañón arrived in an airplane to Mexico City. It was a place he hadn’t seen since half a lifetime earlier and where the only relative he had was his estranged father.

Barrañón, a 27-year-old with the muscular build of a former high school wrestler, had been living in the U.S. illegally since his parents took him to Illinois when he was 14, and had returned voluntarily to Mexico after he “got into some trouble,” he said. Similarly to many young immigrant returnees in Mexico City, Barrañón initially found work at a call center making less than $2 an hour.

Then one day last fall, someone suggested to Barrañón that he apply to a coding school that was geared toward young returning immigrants and that would pay him a stipend to go to class. He thought it was too good to be true, he said.

“Not a scam, but I thought it was, like, a fake,” Barrañón said recently. “Like, it wasn’t going to be true. There was something iffy about it.”

Jorge Valencia - KJZZ
The roster of students at the Hola school in Mexico City.

Many young undocumented immigrants who were taken to the United States as children are considering their options as protections from the Deferred Action for Childhood Arrivals (DACA) program are set to expire in early March. In Mexico, a few are returning, looking for opportunities they didn’t have in the United States.

About two-dozen young returnees, including Barrañón, are in the middle of an unusual software engineering boot camp that was started by two Mexico City entrepreneurs last year. The course, called Hola </code> and designed after Hack Reactor, a popular coding school in San Francisco, is geared toward a population that is rarely discussed in public discourse here.

The course is being funded by a Mexican foundation and a local angel investor, students receive a monthly stipend the equivalent of about $270 and agree to pay their tuition of about $6,000 only if they gain employment as software engineers after graduating, said Marcela Torres, one of the founders.

“We were given this gift from the United States,” Torres said. “I know it’s horrible to say it that way because I know they miss it and they call it home, but if Mexico really took the opportunity and used their potential, it could be endless.” For young immigrants who grew up in the United States, the transition to Mexico is often marred with the challenges of being far from relatives and from familiar surroundings, said Eduardo Garcia, a Mexico City businessman who spoke to the coding school students recently.

Garcia arrived to Mexico City in 2008 after the third time he was deported. When people get here, many just want to go back, he said. Garcia initially got a job as a cook, similarly to what he had done in Atlanta, and now owns three of Mexico City’s trendiest restaurants and employees about 100 people.

Matin Tamizi, an entrepreneur based in San Francisco who’s considering hiring from the dreamer coding school, started a financial services company in Silicon Valley and is now looking to do the same in Mexico. He’s looking to hire engineering and marketing professionals who grew up and went to university in Mexico, but also people who are bilingual and have had first-hand experience with Mexican and American work environments, he said. “They essentially become the bridge between the way that we do business as an American company to our target customers, which is in the Mexican market,” Tamizi said.

This is a welcome prospect for Barrañón. He initially wanted to return to Illinois to be with his wife and two children — who are all U.S. citizens — but now he has a different message when he calls his wife, he said.

Barrañon eventually wants to start his own business. Mexico is a land of opportunity, he said. It just takes time to see it. 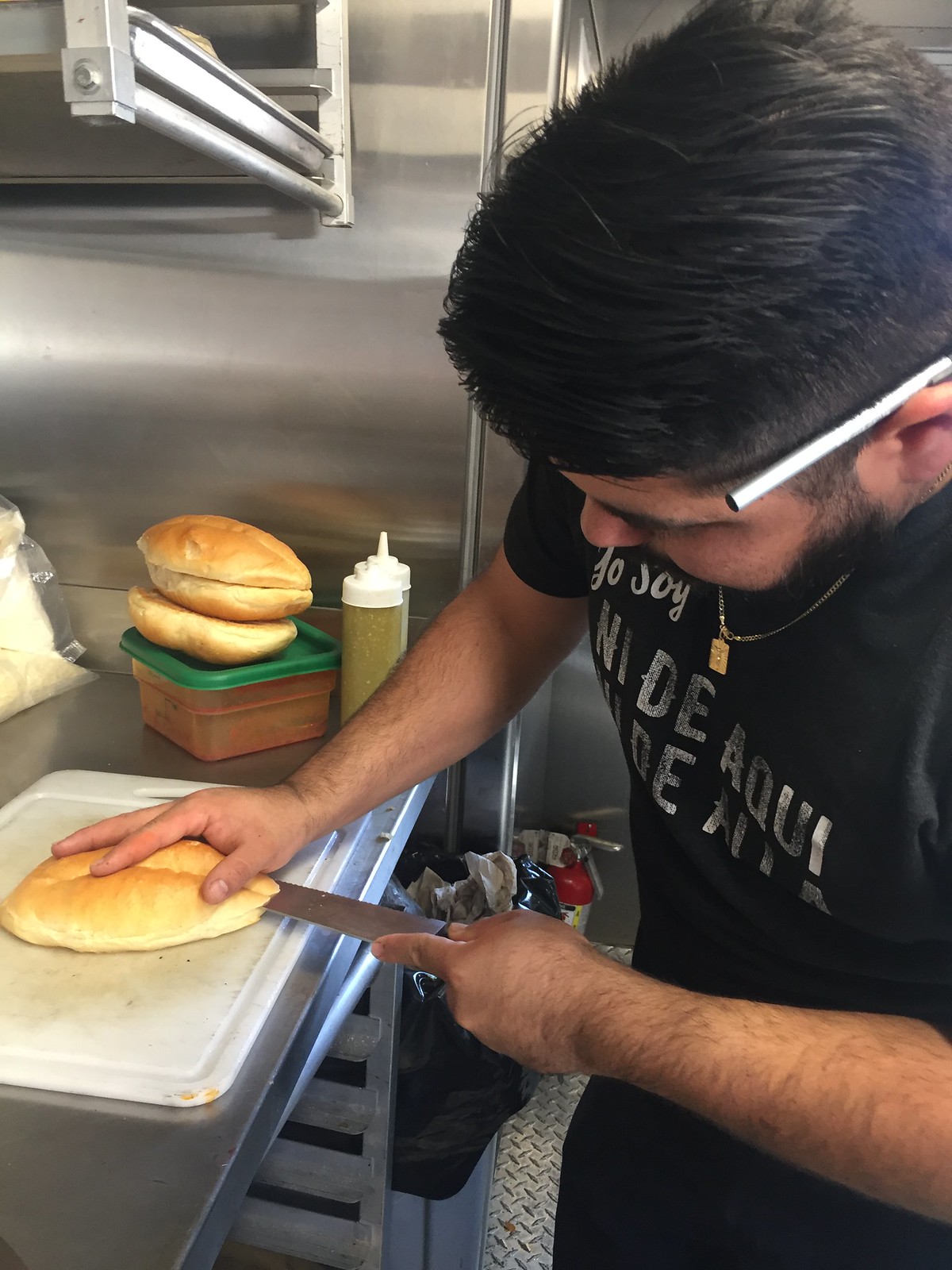