Tracing The Migrant Journey: On The Ground In Guatemala

During the month of August, reporters from KJZZ's Fronteras Desk will be taking us to some of the key places migrants are traveling in hopes of a better life in the U.S. The series "Tracing the Migrant Journey" continues in Guatemala.

Rodrigo Cervantes/KJZZ
The customs office in Tecún Umán, Guatemala, right across one of the bridges connecting with Ciudad Hidalgo, Mexico.

STEVE GOLDSTEIN: Today, we continue our special series "Tracing The Migrant Journey," in which correspondents from the Fronteras Desk explore the path crossed by migrants coming from Central America. Jorge Valencia was with us from Honduras starting this week, and today KJZZ’s Mexico City Bureau Chief Rodrigo Cervantes takes us to an area with historic and commercial ties that’s been quickly transforming due to recent migration policies — the Guatemala-Mexico border. Rodrigo, good morning.

GOLDSTEIN: So, you’ve been reporting during the past few days in an area that gained notoriety after the so-called "migrant caravans" crossed it, so what can you tell us specifically about this area?

Rodrigo Cervantes/KJZZ
Rafts made out of old tires crossing the Suchiate River, which separates Guatemala from Mexico.

CERVANTES: Well, there is this town called Ciudad Hidalgo, on the Mexican side, and Tecún Umán, in the Guatemalan side. These are two towns divided by the Suchiate River, but strongly linked by their roots and also by trade. Think about this as a smaller and less wealthy version of the two Nogales. People cross from one side of the other by foot, by car. They use bridges here, but they also use rafts to cross the river. And all of this made it an ideal crossing point for the recent large migrant caravans that we've seen in the past couple years. That's until Mexico placed temporary fences to contain and regulate one of the caravans recently And you probably remember this story, Steve, in which the care of and actually knocked them down. Let's remember that Mexico allows transitory migrants and refugees into the country, but now requires more paperwork. And that's what the Mexican government was trying to do ... to organize a caravan. But the caravan just couldn't wait.

GOLDSTEIN: You spent some time in Guatemala. And that's the only nation so far that has accepted and it's signed an immigration agreeing with the U.S. to become what we're calling a "safe third country." Now, what does that mean? Define that for us. And what did you heard from the population there, as far as their reaction to it?

CERVANTES: With the agreement, undocumented migrants arriving from Central America to Guatemala need to apply for asylum ... they don't have to go to the United States to do so. So many Guatemalans are opposed to it. They consider it a violation of Guatemala's sovereignty. And it hasn't been fully implemented yet. Another migration-related factor that it's impacting the area comes from the Mexican side of the border. This is the recently formed National Guard, which is patrolling the area. And also Mexico is having stricter migratory policies to revise documentation. I spoke to Mario Morales. He coordinates a nonprofit helping transitory migrants and this is what he said.

CERVANTES: So, Morales says that migrants are still crossing to Mexico, but through areas that are more dangerous. And he thinks that they're exposed to more crime and to human rights violations now.

GOLDSTEIN: And Rodrigo, this is an especially interesting time, with Guatemala facing some big political changes. It marked presidential elections last Sunday. And this is really important when it comes to a lot of these policies, who won the elections and what's his take on immigration?

CERVANTES: Well, it was a former doctor and jail director named Alejandro Giammattei. He won the election. And, in fact, this was his fourth attempt. He is a politician inclined to the right. He opposes, for instance, gay marriage and abortion. And speaking about immigration in recent interviews he has said that he's against the fafe third country agreement. But he also thinks of developing what he calls a wall of trade and prosperity between Mexico and Guatemala — meaning that he wants to develop the area and to try to stop migrants from going up north and just stay in this border zone and develop it. The community in Tecun Uman, what I heard, is that there is a strong division on migration issues. Some feel empathy for undocumented migrants arriving there but others don't.

GOLDSTEIN: And Rodrigo, let me close with this. Migration policies really affect the dynamics between the border towns that are so intertwined. We've of course seen it here in the Arizona-Sonoran region before. But what about the area you visit between Mexico and Guatemala? What stands out there?

CERVANTES: Well, Steve, the biggest impact that stricter immigration controls have brought to the area, according to all the people I've talked to, is mainly aid and ergo, I would say on the local economy. Guatemalans go to the Mexican side to buy plenty of goods, which are way cheaper in Mexico. But that has decreased significantly. And the chain effect hits the renters of the rafts, for instance, as they have less customers. Or people like Esther Lopez who sells street food on the Mexican side of the river, and this is what she told me. 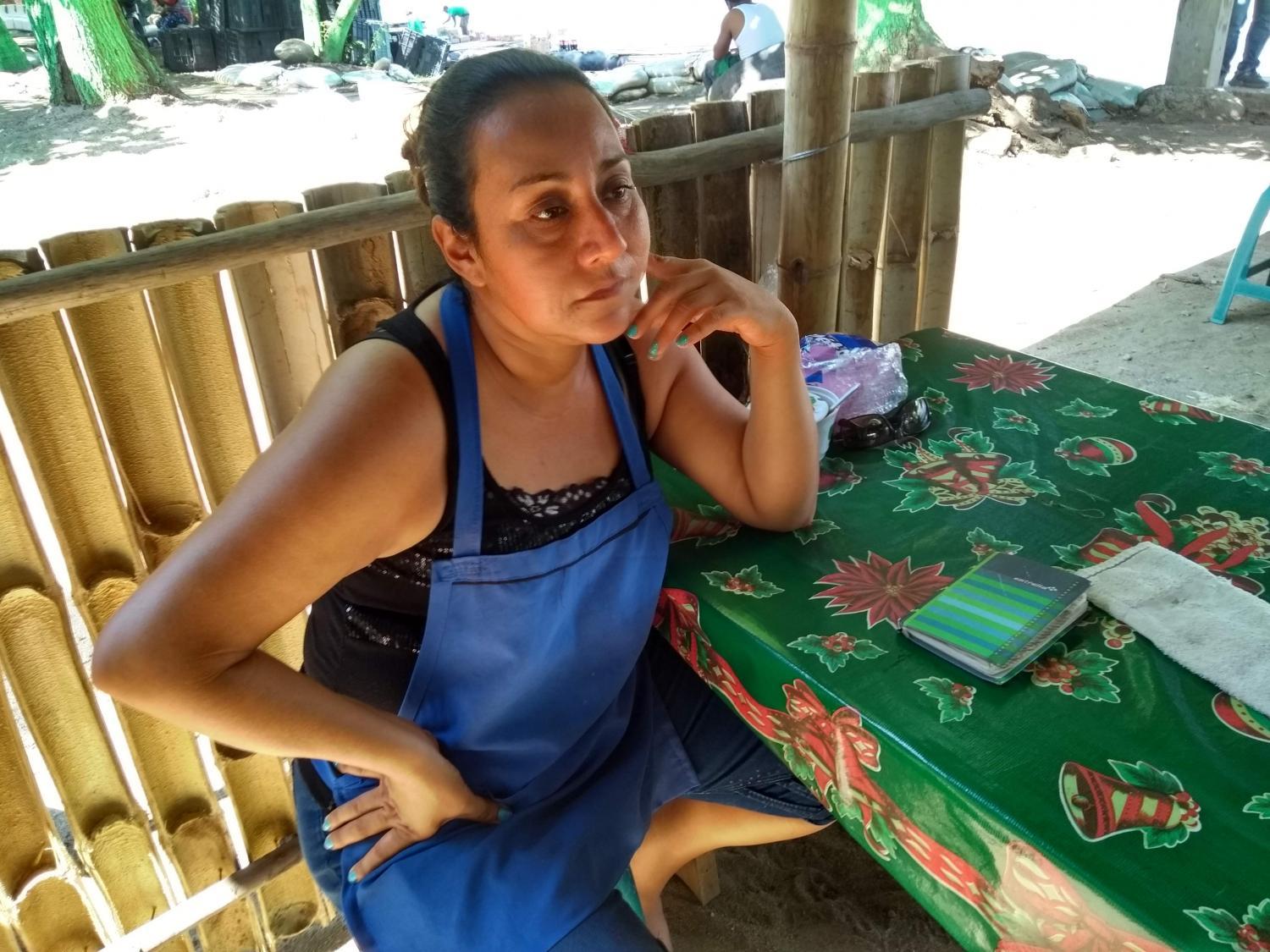 Rodrigo Cervantes/KJZZ
Esther López at her austere street food shop right next to the Suchiate River, on the Mexican side.

CERVANTES: So, Miss Lopez says that the sales dramatically dropped after the Army, the National Guard and immigration officials arrived on the Mexican side. And the issue, as I heard, it's also concerning the local governments.

GOLDSTEIN: Learn more from our "Tracing The Migrant Journey" series on KJZZ.org, and follow our correspondents' steps through this special coverage on Twitter using the hashtag #MigrantJourney. And that is KJZZ's Rodrigo Cervantes, joining us from Guatemala-Mexico border. Rodrigo, thanks very much. Take care.