Tracing The Migrant Journey: On The Ground In Phoenix, Arizona 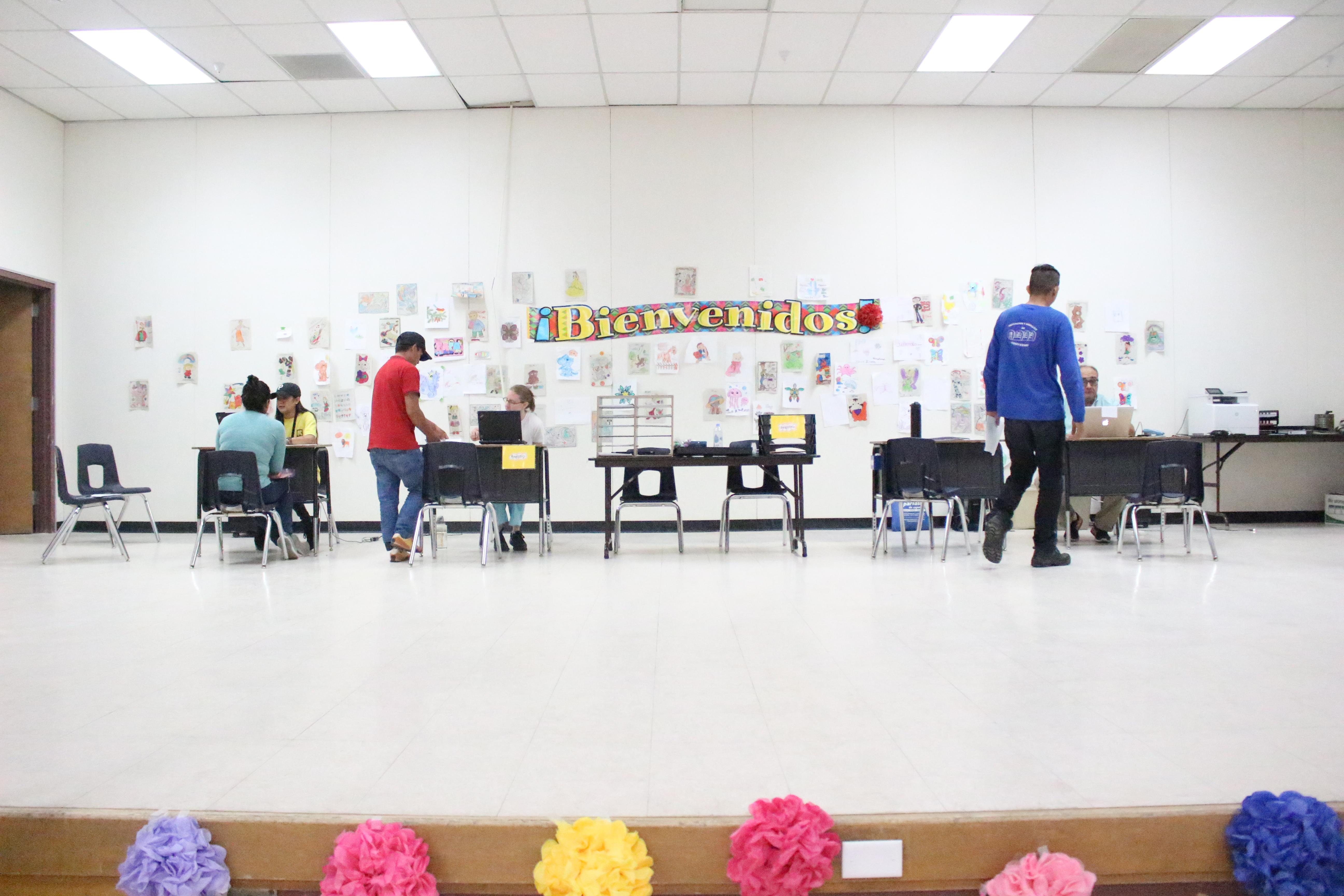 Bret Jaspers/KJZZ
After getting settled and plugging in their phones and ankle monitor batteries, migrants at the IRC shelter go through an intake process.

MARK BRODIE: Tens of thousands of migrant families have passed through Phoenix this year on their way to destinations in other parts of the country. Area churches and nonprofits have offered these people aid, and just last month aid groups opened a 24/7 shelter. It's one stop on the migrant journey we've been covering over the past two weeks. And here to tell us about it is KJZZ's Bret Jaspers. Hey, Bret.

BRODIE: So, you're out in front of the shelter now, you've been doing some reporting there. How do people get there?

JASPERS: Well, the Department of Homeland Security, the federal government, calls the shelter, you know, the night before or early that morning to say, "Hey, we have some people for you." And then DHS pulls up mid-morning in a big white bus and lets people off. The shelter itself is an old school, and the first room people enter is a former cafeteria with a large stage area. There's coffee, juice and things to eat there, and a play area for kids, you know, who waste no time in diving right into the toys.

BRODIE: Not surprising there. I imagine the adults, though, who've arrived are wondering what happens next.

JASPERS: Yeah. So, the staff, you know, pretty quickly hold intake sessions with each family to answer questions they have and give them some initial information about finding legal help in the places that they're headed. The staff then will call the families that live in the U.S. to have them buy bus or plane tickets as soon as possible. You know, most people are here really just a short time, and some were on the way to the Greyhound station within a couple of hours of being dropped off.

BRODIE: So, Bret, who did you have a chance to talk to there?

JASPERS: Well, the group I talked to was mostly from Mexico — 24 people in all. These were parents with their children. And here's a Mexican man I spoke to. I'm not using his name out of security concerns. He and his family were headed to South Carolina.

MIGRANT MAN [Translated from Spanish]: The truth is, there is a lot of violence in Mexico. There is a lot of violence, and that's how a family member of ours was killed. I don't want to be there because of the violence. So, I decided to look for help through asylum. Thank God we made it here. And here we are. During the entire trip everyone treated us well. And thank God we arrived here.

JASPERS: You know, people were generally in immigration custody for a really brief time — one or two nights. But these are parents with children, like I said, not solo adults and not solo children. Both of those groups typically remain in government custody. Another person I talked to was a woman headed to Tennessee with her two daughters. She told me she waited a month and 20 days on the border before crossing. 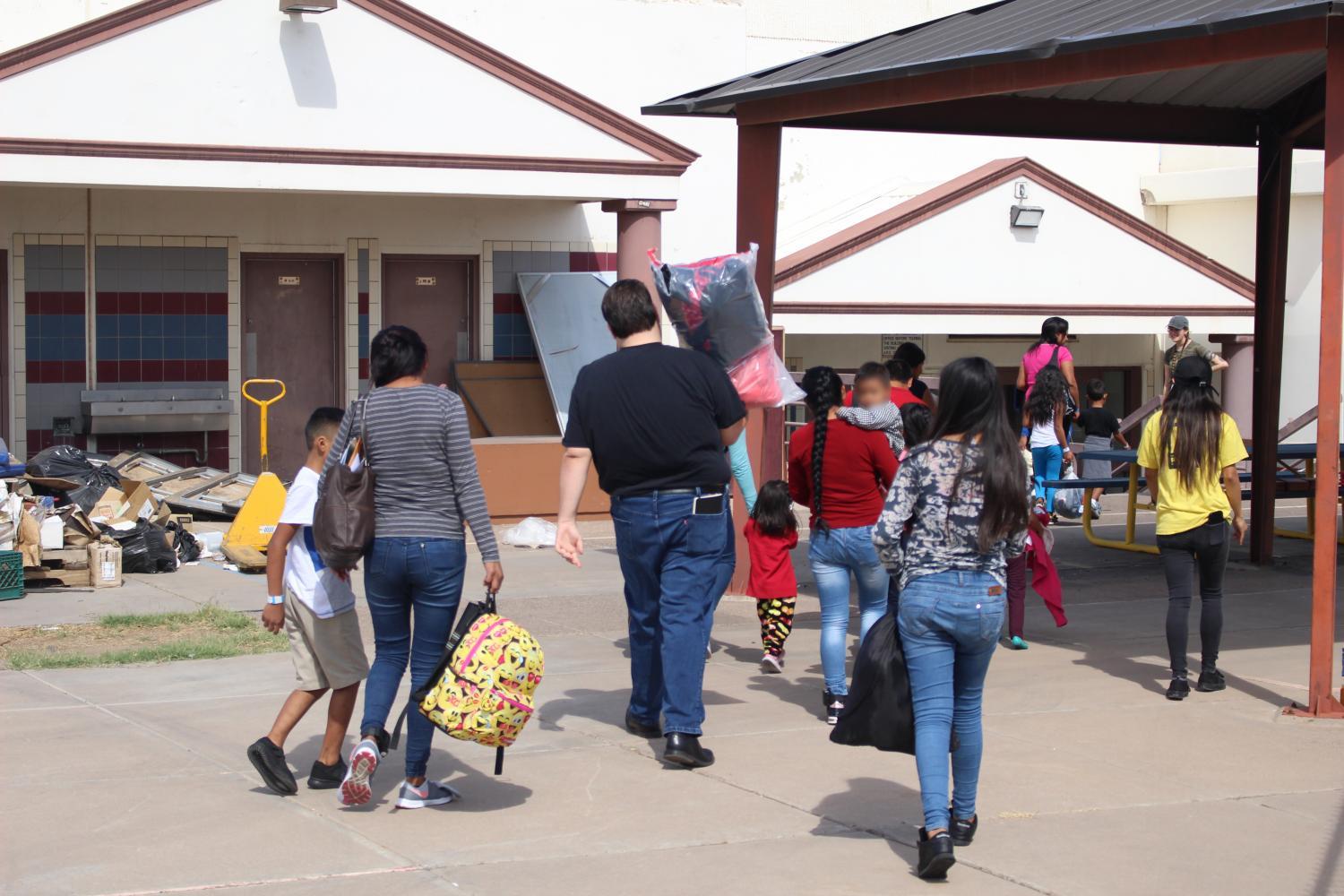 Bret Jaspers/KJZZ
A group of 24 people were dropped off this day. These are parents with children only. Solo adults and solo children are likely still in government custody.

MIGRANT WOMAN [Translated from Spanish]: We were three families that rented a room. We didn't have much, but between us three, we divided the costs. One family is here. Another is — well, we don't know anything. We haven't heard anything since the officials brought us here. They separated us from them, so they haven't arrived here or at the detention center.

JASPERS: The detention center meaning, you know, the Phoenix ICE facility where people spent the night before getting dropped off at the shelter. And just to make clear, these were not family members she was separated from, it was a different family she had met along the way.

BRODIE: Well, have numbers been lower than expected?

JASPERS: According to ICE numbers that I've seen, family releases have definitely slowed in late June and July in the Phoenix area. The IRC [International Rescue Committee] says they expected lower numbers because it's the summer. You know, it's obviously really hot. But their spokesman, Stanford Prescott, said they expect numbers to go up in the fall and called it a long-term investment.

STANFORD PRESCOTT: This is an evolving situation. The numbers that arrived change month to month. Immigration policies change. And so we'll continue to evaluate those decisions here based on the need. But as long as there's a need here, we're committed to serving.

BRODIE: So, Bret, what else do they have there? 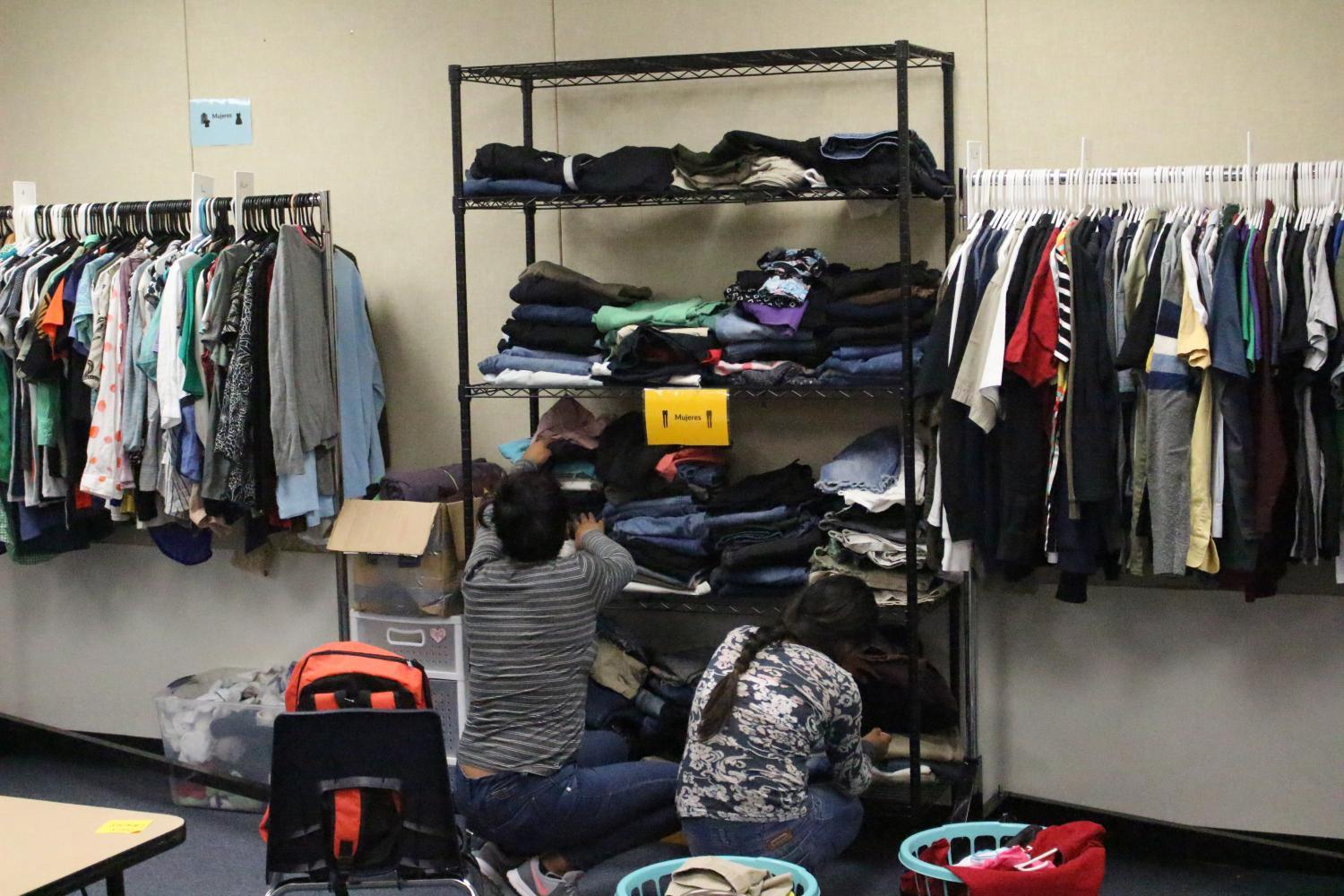 Bret Jaspers/KJZZ
In the "Ropa Room," people can select new hygiene products, backpacks and stuffed animals, as well as used clothes and shoes.

JASPERS: Well, there's a room for medical checkups if people want them. There's a side room called the "Ropa Room" where people can get new hygiene products and choose among donated clothes. Niko Valachovic is a staffer for the IRC, and when I asked her, you know, which item tends to run low, she said pants.

NIKO VALACHOVIC: Pants we tend to wear until they're out — until they're like not wearable anymore. Also, American sizes are way bigger. So, it's hard to find pants that are the right size and the right length.

JASPERS: So, you know, they don't have a lot of pants for people, but they do have a lot of new donated stuffed animals. And those were pretty popular with the kids.

BRODIE: All right, that is KJZZ's Bret Jaspers in south Phoenix. Bret, thank you.