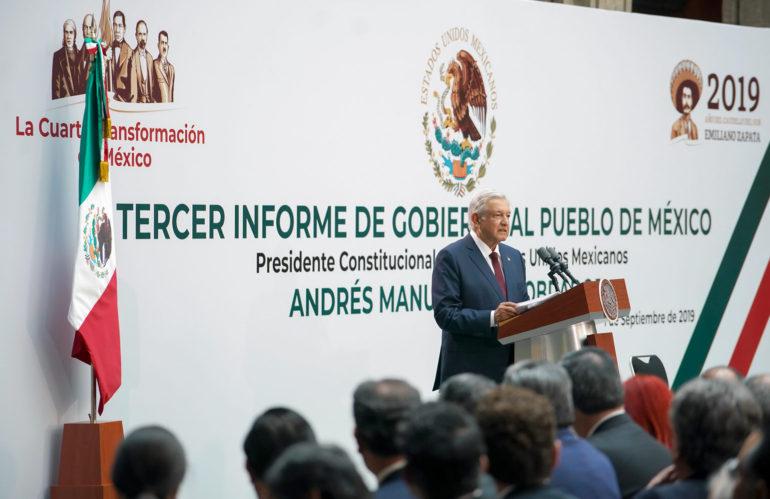 Office of the Mexican President
Mexican president Andrés Manuel López Obrador at his first State of the Union, which he called his third one, as he delivered two speeches earlier this year to address his government's progress.

MEXICO CITY — The Mexican president delivered his first State of the Union speech on Sunday not at the Congress, but in a ceremony among state secretaries, businessmen and governors from his party. Migration and the U.S. were among the key topics.

President Andrés Manuel López Obrador (AMLO), spoke about his government’s accomplishments since he took office in December in front of people close to his government at Mexico's National Palace.

He said his government rescued the trade relationship with the U.S. with tougher immigration reinforcement that protects human rights.

"Mexico is now the main trading partner of the U.S.," AMLO said. He stated he expects the U.S. Congress to ratify the revised North American trade agreement, known as the US-Mexico-Canada Agreement (USMCA).

AMLO asked for applause for Mexican migrants, as their remittances are Mexico’s main source of income.

The president said his government is demanding that the U.S. seek the harshest sentence for the gunman in the El Paso mass shooting, where eight Mexicans died.

Outside of the National Palace, thousands of protesters demanded the president, among other things, to reinforce the country's security and to keep supporting public health.