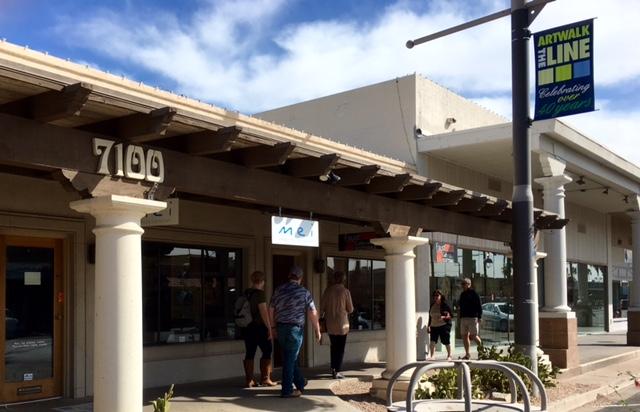 STEVE GOLDSTEIN: The 2017 Tax Cuts and Jobs Act that was approved by Congress and signed by President Trump included a provision on opportunity zones. That gave states the opportunity to nominate certain areas — presumably low-income sections — as those zones, where developers would have incentive to build based on capital gains related tax breaks. The aim is intended to be the revival of neighborhoods and surrounding areas that may have been struggling. In Arizona, two designated opportunities zones are in Scottsdale, and one of them has some people scratching their heads. Wayne Schutsky is managing editor of the Scottsdale Progress. He wrote about the opportunity zones and is with me. Wayne, let's begin with where Scottsdale's opportunity zones are.

WAYNE SCHUTSKY: One of them is located at around 64th Street-McDowell area, which kind of qualifies [as] what most people would consider is maybe an area that could use some incentive for redevelopment. The other is located in downtown Scottsdale, however, which causes some heads to turn when people describe that as a low-income area.

GOLDSTEIN: That second zone, and let's describe a little bit more. That's where — it seems like a very much a tourist hangout, maybe just south of Scottsdale Fashion Square, kind of in that area?

SCHUTSKY: That's an accurate description. The zone does not include Fashion Square but it does include much of the rest of downtown Scottsdale. We're talking about the gallery district's, Fifth Avenue where the shops are, the bar district — all of that stuff. And the way it qualified was under a stipulation that a census tract could qualify if it had a median family income that is less than 80% of the area median family income, that area being the Phoenix metro. One thing that the federal government allowed states to do was cherry pick that data from 2015 American Community Survey numbers from the Census Bureau. Under that 2015 data. It does qualify. It was about 72 percent of the area median income. However, if we go ahead and look at the 2017 data, which are more recent, that jumps up to 130% of the of the median income. So you see a massive jump in median family income in this tract without a correlated jump in Phoenix metro area.

GOLDSTEIN: Is this something that seems like it was not actually fitting in with how the rules were set up to begin with?

SCHUTSKY: I did speak with some people who were involved in actual crafting of this law, and they did note that this tract appeared to be kind of an exception to the rule and that many of the other tracks nationwide do seem to fit more in line with the spirit of the law. They do fall in these low-income areas that cities have been trying to reinvigorate. Downtown Mesa comes to mind. That's a place that the City of Mesa has been trying very hard to to spur development with varying levels of success. And actually a Scottsdale based company has jumped on this opportunity zone thing, and they have nine properties in downtown Mesa.

GOLDSTEIN: How did this happen then, Wayne?

SCHUTSKY: That's a good question, and that took a lot of digging. According to the federal government, the last say on this matter comes from governors. So I contacted the governor's office. I was told that the [Arizona Commerce Authority] took the lead on this. So I contacted the ACA. When I contacted the ACA, I was sent a very formal statement that for cities, towns municipalities with over 10,000 residents, we delegated a lot of that power to the cities and took their recommendations very seriously. So at that point, I contacted the city. You see where this is going. I eventually found out that it was a collection of city staff — from economic development planning, the city manager's office — collectively who made this decision. I spoke with the mayor, and it turns out the mayor, city council they did not have input on this decision. The mayor, in fact, told me he had a hard time figuring out who on city staff made this designation.

GOLDSTEIN: Based on the folks you talked to, were they as surprised as you were to any extent?

SCHUTSKY: The mayor — I don't know if surprised is the right term — but he did say that he did not believe this area needed an incentive like this, that this area was not hurting for development. If we look at a lot of the big developments coming through the pipeline in downtown Scottsdale, a lot of them were in the works. We had parcels being purchased well before this went into effect or was even passed that. And he's not alone. I spoke with a public policy professor at Arizona State University who agreed and said that you're essentially dumping a subsidy on investors who would have been doing this thing anyway — that is, investing in downtown Scottsdale.

GOLDSTEIN: Is there any way that this actually could turn out to be some sort of a positive boon for the the greater area around downtown and not just be advantageous to developers of those who are already doing well there?

SCHUTSKY: So that that is one argument. In fact, there's another stipulation that a certain amount of tracts that do not qualify can actually be designated by the state if they are neighboring qualified tracts, which lends credence to the idea that economic prosperity in one area will spill over into others. Because these tracts are not like cities. They're very all-over-the-place lines. They represent a certain amount of residents, and that's basically how they're defined. So there is some who would argue that  — once again, that the ASU professor I spoke with would disagree. He said this was an inefficient way to invest in low-income communities because you're basically starting at the top, giving money to already predominately wealthy individuals and hoping that that money makes its way to the communities that you want. He argued that direct investment in educational programs or housing and urban development programs to help with affordable housing would be a more effective way to help these communities.

GOLDSTEIN: What do you think is next for this story?

SCHUTSKY: I want to see who's going to take advantage of this. Because, like I said, a lot of the developments on ongoing or in the pipeline in downtown Scottsdale were already happening. But that's not going to stop any of these developers from using them. Now, the first big one that came to mind for a lot of residents after reading the story was a 150-foot-tall office building near the Galleria in downtown that was recently approved by the City Council. The attorney for that developer has come out and said they will not be using the opportunity zone designation. So that's that's one of the board, but there's still Museum Square in the arts district that I know has been talked about on this show before, and Southbridge Two, which is along Fifth Avenue — a massive redevelopment that's in the pipeline. And I have no information about whether any of those developers will be using them, but they could be. And so that's gonna be watching how this is actually applied in practice.

GOLDSTEIN: Wayne Schutsky of the Scottsdale Progress, great reporting. Thanks for being here.

SCHUTSKY: Thank you for having me.