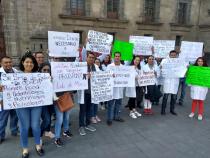 Rodrigo Cervantes
A group of dentists from the state of Mexico protest outside the National Palace in Mexico City after losing their jobs in the public health care system.

Among the affected is Verónica Cárdenas, who worked as a dentist under the Progresa public health care program, until it closed in April.

“We lost our job cuz the federal government canceled our program from one day to other,” Cárdenas said.

According to the dentist, she used to provide about 10,000 treatments per month to lower-income communities, mostly to children.

“We think that this government is going to be better than the others, but no, he’s not,” Cárdenas said.

The Mexican president stated that his government will revise the list of critical medical supplies and their distribution.