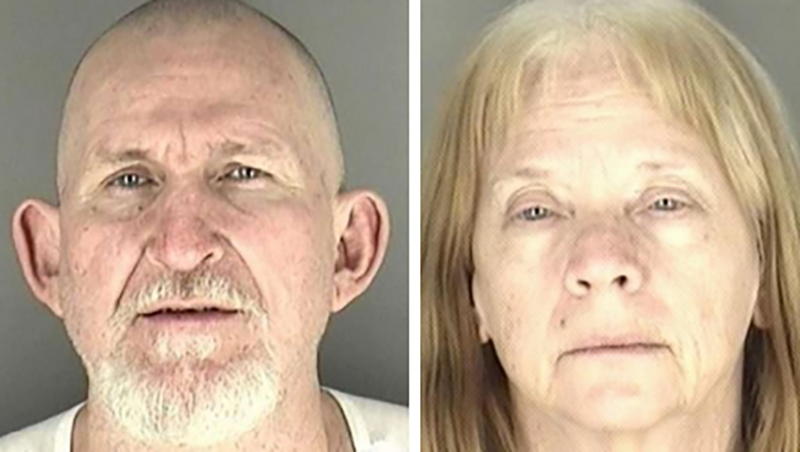 A tip pointing to a remote Arizona community led to the end of a more than two-week-long manhunt for a couple who overpowered their guards and escaped a prison transport van that was bringing them across the country to face charges in a man's killing, federal authorities said Thursday.

About 50 officers from multiple agencies surrounded a house 50 miles northeast of Phoenix where Blane and Susan Barksdale were stayed, said David Gonzales, the U.S. marshal for Arizona.

“We got a tip that came in that said, ‘You might want to look in the area of Punkin Center,’ which is near Roosevelt Lake,” said David Gonzales, U.S. Marshal for Arizona.

The homeowner was the first to come out Wednesday, followed by a "sobbing" Susan Barksdale, Gonzales told reporters in Phoenix. The 59-year-old surrendered and confirmed that her husband was inside.

Blane Barksdale, 56, initially refused to leave the home, and when he did emerge, he was "verbally abusive," authorities said. Officers subdued him with a stun gun, then he became cooperative, said Van Bayless, U.S. marshal's assistant chief deputy for Arizona.

"On the way out, he told a trooper and myself: 'Be safe out there. It's dangerous,'" Bayless said.

The couple will be taken south to Tucson to appear in court later Thursday. They will likely face federal kidnapping charges for their escape, authorities said.

Officials believe at least three or four people helped the couple during their time on the run. The Barksdales were wearing clean clothes and had to have gotten a ride to the remote area, Gonzales said.

He did not identify the owner of the home where they were staying but said that person had served time for drug-related offenses and was on federal probation.

The Barksdales escaped Aug. 26 in Utah while being brought from upstate New York to Tucson to face charges in the April death of a 72-year-old man. Authorities said the couple overpowered two private security guards in the transport van after Susan Barksdale faked a medical emergency.

Gonzales previously told The Associated Press that the couple tied up the unarmed guards with shoe laces and took a key to remove their own waist restraints. A third prisoner was present but not involved.

From there, the Barksdales drove the van with the three in the back into Arizona. Once they got to the middle of the state, around the tiny town of St. Johns, they picked up a friend's red GMC Sierra pickup truck. The couple drove both vehicles to a remote area outside town and abandoned the van, Gonzales said.

It took the guards more than two hours to free themselves. By the time authorities reached the guards, the couple had been gone for several hours.

For about a week after the escape, digital highway signs displayed a message about the fugitives and the pickup. Authorities took down the message after concluding the couple likely weren't using the truck anymore.

Blane Barksdale was put on the U.S. Marshals 15 Most Wanted List earlier this week. The Barksdales are suspected of killing a Tucson man in April.