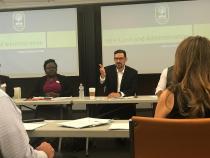 Arizona’s 2016 presidential primary is remembered by many as a fiasco after thousands of voters, including people with disabilities, stood in line for hours to vote.

While that was unusual, voters with disabilities often face hurdles. Efforts are being made to improve that.

On Thursday, Fontes met with members of the disability community. A big area of concern for this population is access.

"They want what they deserve, and they want their rights preserved," Fontes said. "We’ve got a lot more awareness on access to large print ballots and braille ballots, for example. We are completely replacing the specific voting machines that we use for people with disabilities with a much better, newer model for the 2020 cycle."

Renaldo Fowler is a senior staff advocate with the Arizona Center for Disability Law. He joined Fontes at the roundtable. He says his job is to look at the entire electoral process

At least two people at the roundtable expressed their frustrations about poll workers who were not trained or prepared to help a person with a disability vote.