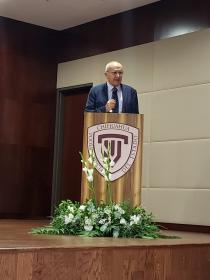 Mexican Secretary of Foreign Affairs
Jesús Seade, the Mexican undersecretary of foreign affairs, is one of the main trade negotiators with the United States.

MEXICO CITY — The Mexican government is expecting the U.S. Congress to soon ratify the U.S.-Mexico-Canada Free Trade Agreement (USMCA). And the Mexican undersecretary of foreign affairs has important expectations on the agreement’s benefits.

Jesús Seade is the Mexican undersecretary of foreign affairs and one of the top negotiators of the USMCA. He said USMCA will bring investments to Southern Mexico, one of the most underdeveloped areas in the country, and will also help on the development of Central America as part of a broader plan.

"Twenty-five years ago, when the North American Free trade Agreement was ratified, Amazon was just a river,” Seade said.  He joked that when the first trade agreement was signed, Amazon used to be a river and not an e-commerce business.

Seade said USMCA will now include tech companies, while bringing better conditions for workers and facilitating professional and academic exchange.