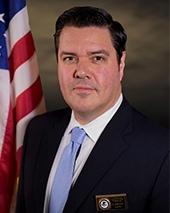 Gov. Doug Ducey has announced his selection of a new director of the Arizona Department of Corrections.

The governor says he was looking for someone with a record of solving problems and getting results, and David Shinn is that man.

Ducey said Shinn has held leadership roles at several correctional institutions across the country over 30 years.

“David brings a depth of experience ... from serving as a corrections officer to overseeing thousands of staff and inmates as a complex warden and ensuring high-quality operational procedures for one of the largest prison systems in the world," Ducey said.

A statement released by the governor said Shinn has worked in an executive role at federal prisons in California and Hawaii.

Shinn currently works an assistant director for the Federal Bureau of Prisons in Washington, D.C. In a statement, he said he was fully committed to safety and security in the prisons and wanted to build upon ADC’s re-entry services.

Shinn will oversee more than 8,500 employees and a billion-dollar budget.

His first day as director will be Oct. 21.

The criminal justice reform advocacy group Families Against Mandatory Minimums, or FAMM, has worked at both the state and federal level, including on the recent First Step Act. Molly Gill is FAMM’s vice president of policy, and she joined The Show to talk about the kind of director she expects Shinn to be.