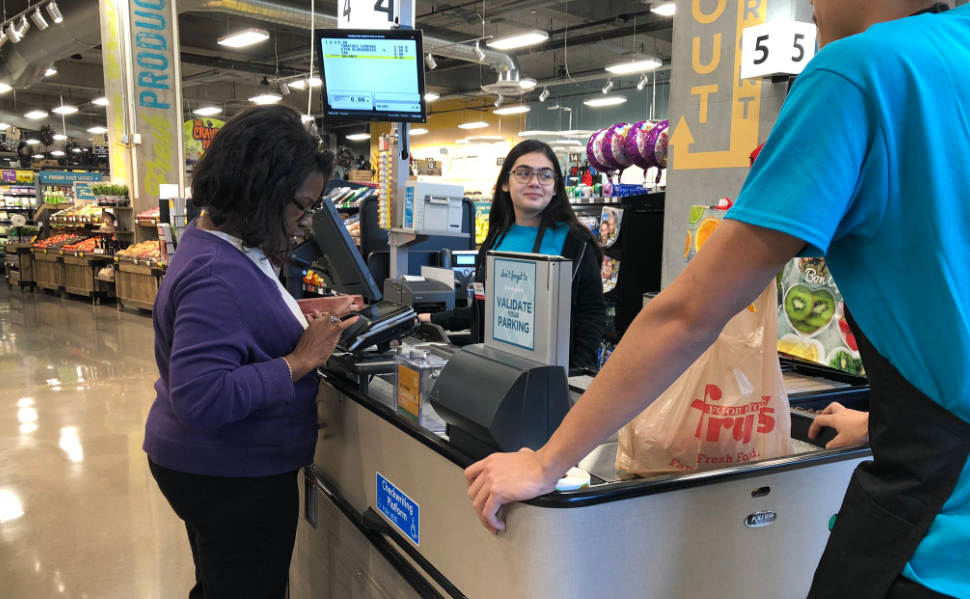 Scott Bourque/KJZZ
The first transaction at the Fry's store in downtown Phoenix on Oct. 23, 2019.

After several decades, downtown Phoenix finally has a supermarket. Fry’s Food and Drug Stores opened its new 67,000-square-foot store on the ground floor of Block 23, a midrise mixed-use development across from Talking Stick Resort Arena.

The new Fry’s store, located at First and Jefferson streets, will eliminate a food desert in one of the fastest-growing parts of the Valley. The supermarket also fills a gap that had hampered efforts to bring more residents and businesses downtown.

“Even as I think about our customers and the feeling I had as I walked in through the door today, it was overwhelming with excitement,” said Monica Garnes, president of Fry’s Food Stores. “We’re proud to be able to eliminate a decades long — decades long — food desert here in downtown Phoenix.” 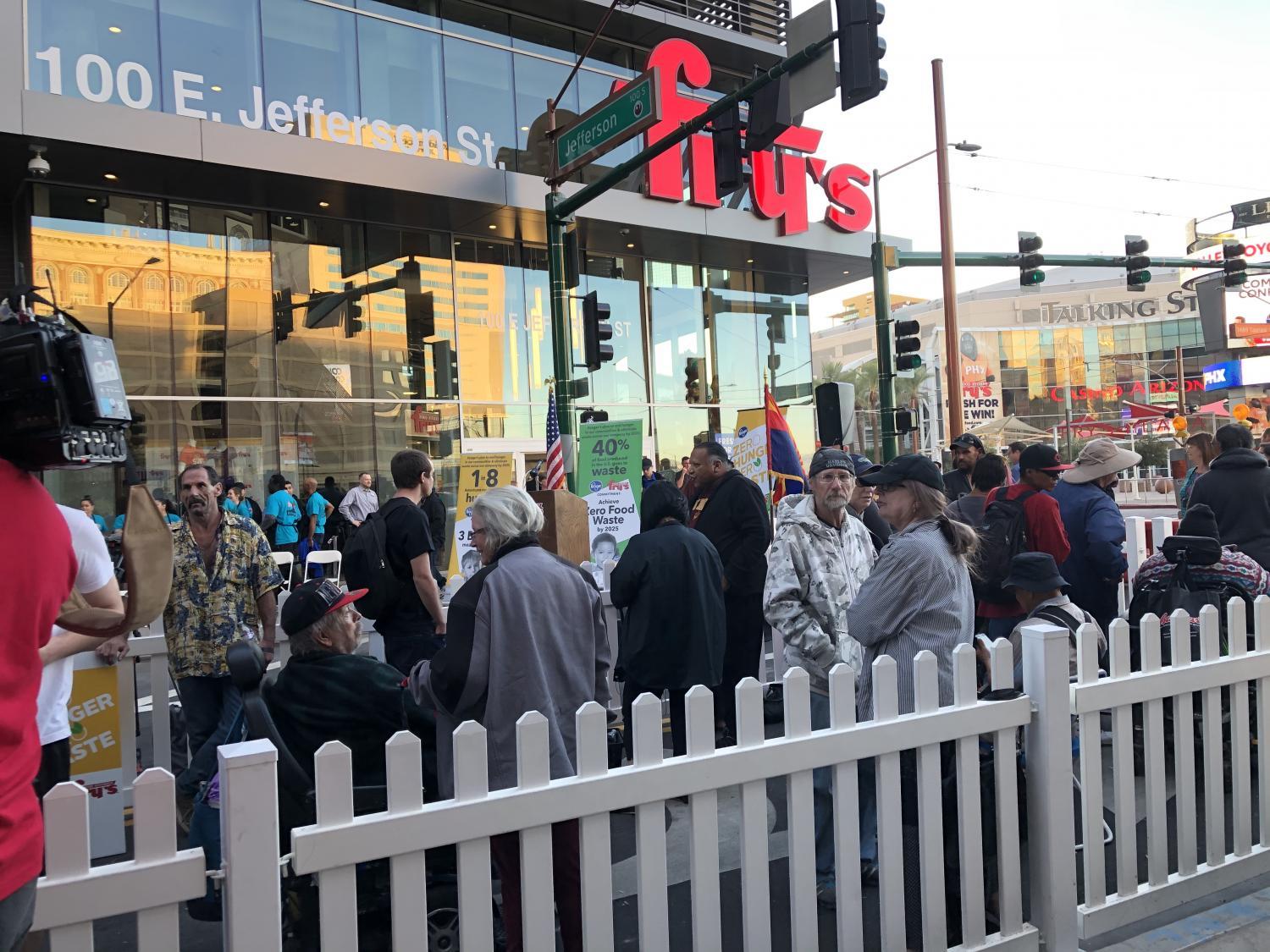 Scott Bourque/KJZZ
People lined up as early as 6 a.m. to be the first to shop at the new Fry's store in downtown Phoenix.

The food desert could be called a cause — or a symptom — of the general lack of interest in living downtown over the past few decades.

Phoenix City Councilman Michael Nowakowski, who went to St. Mary’s High School (which used to be located at Third Street & Polk), recalled his youth in a downtown that felt like a ghost town.

“Back in 1982, I graduated from St. Mary’s High School,” he said. “I used to catch the bus, right here, at this location. And sitting on that bus stop I never imagined seeing a CityScape or having ice skating in downtown Phoenix. It’s those visionaries like (ASU President) Michael Crow that decided to move a campus downtown. Now we have all three major universities, right here in downtown Phoenix.”

Development downtown has grown since the Great Recession, but it still falls behind other areas of the city. Mike Ebert, managing partner for the developer that built Block 23, said the lack of access to groceries kept downtown from growing.

“A lot has changed since 2005,” he said. “Major public investments like light rail, ASU, the tripling of the size of the convention center. Those projects paved the way to create demand for the over 200 restaurants now located downtown.”

As the economy and housing market stabilized, downtown did, too. 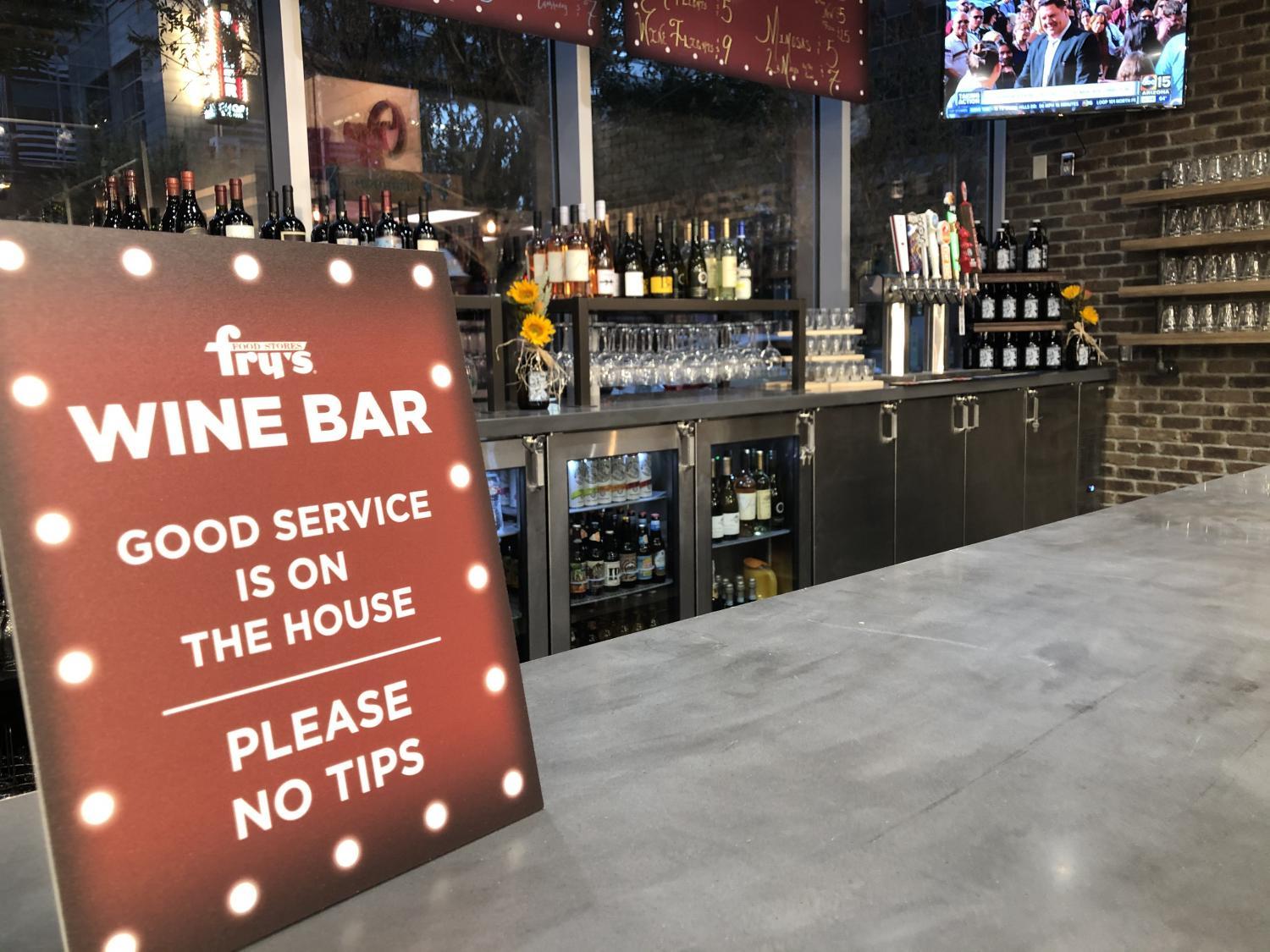 Scott Bourque/KJZZ
The wine bar at the new Fry's store in downtown Phoenix. The store opened on Oct. 23, 2019, and eliminates a food desert in the downtown area.

“By 2014, we felt there was just one thing missing downtown, and that was a grocery store,” he said. “Fortunately our search was limited. We called one: Fry’s.”

“When you think about a neighborhood, you always say ‘that’s my Fry’s, that’s my local store,'” she said. “Now the downtown residents will be able to say the same thing, that they have a local store in the community. And it’s going to help developers say ‘we're gonna build more apartments, more condos’ and I think it’s going to help the city take it up a notch.”

Currently, a few thousand people live in the one-mile radius around the store. But more than 4,000 new housing units will be completed in the area over the next few years. Arizona State University is considering a new residence hall and is seeking to expand enrollment at its downtown campus by 5,000 students by 2023. Talking Stick Resort Arena is on track for a major renovation. And the Phoenix Biomedical Campus is building a new $77 million research facility.

The store employs about 250 full- and part-time staff. It has a full pharmacy, produce department, deli, Starbucks, wine bar, and Chompie’s Deli.