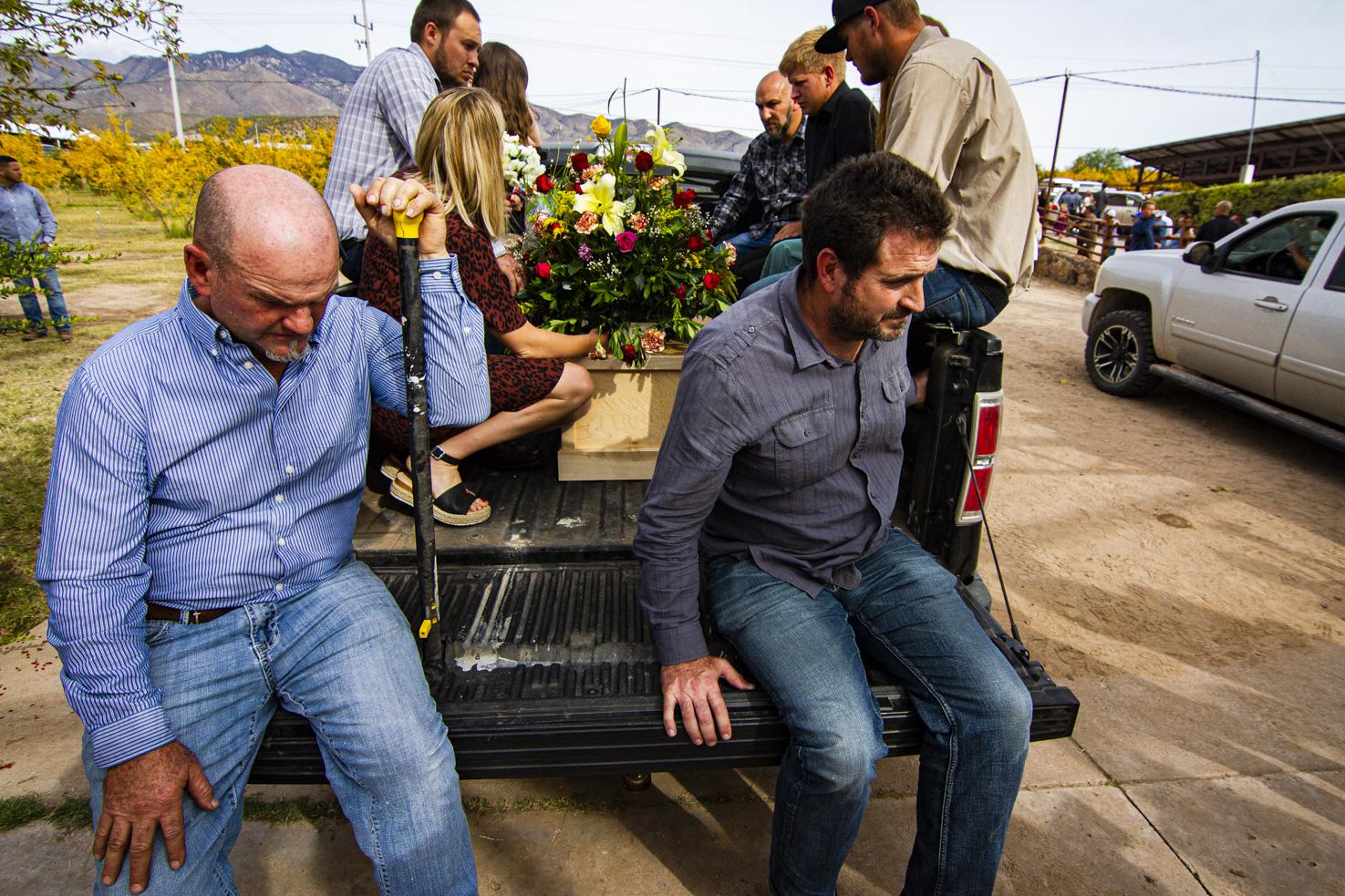 The day La Mora buried its dead began like many others. As family poured in from around Mexico and the United States to mourn last Thursday, daily chores still needed to be done, including feeding the chickens and milking the cows.

“I got probably a gallon right now,” another replied.

For those young boys, this river valley in remote northeastern Sonora was an idyllic place to grow up. Tall mountains tower over acres of pecan and pomegranate trees, hanging heavy with ripe fruit. The large, U.S.-style homes speak to the success the community, which identifies as Mormon, has found there.

“We all love this place,” one of them said. “We have the best place here.”

“Normal. Gardening, school, taking care of things, lots of family,” said Amelia Sedgwick, summing up life in La Mora over her roughly four decades there. “Big Thanksgivings, celebrations for a week. Christmas, everybody home. Swimming in the river, hiking, going to the ranches to camp out. Life has been beautiful.” 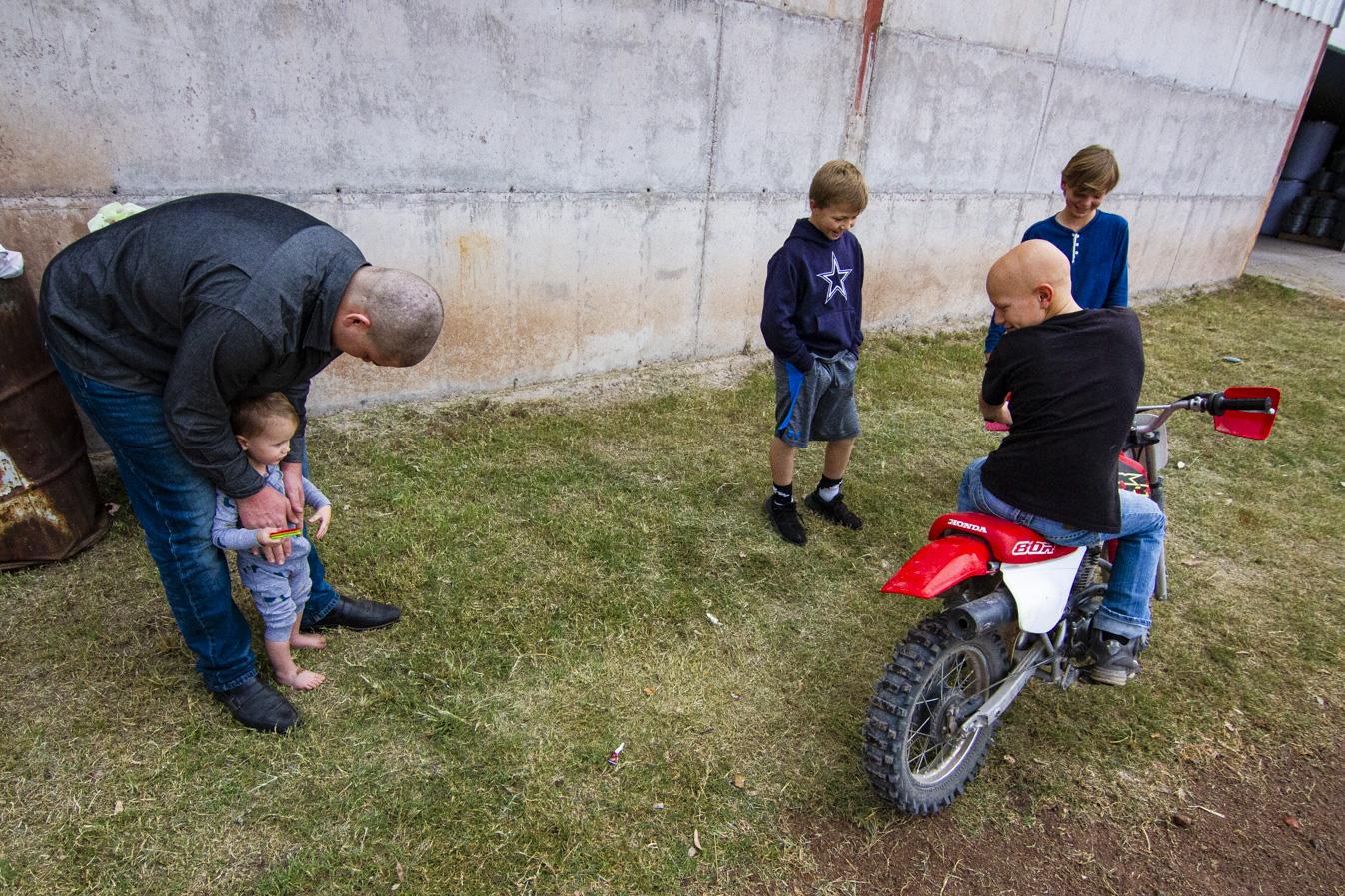 Murphy Woodhouse/KJZZ
Family members of the massacre's victims gathered from around Mexico and the United States. Many children were running around, doing chores or playing before the day's somber events.

Her daughter Christina Langford was one of three women killed in attacks early last week. Six children were also among the victims of the suspected cartel ambush.

“Home here is a paradise. And now it’s scary,” she added. “The only thing you can rely on is God. Just hoping that there’s some sort of a purpose. Maybe there’s a greater good for the whole of Mexico and the people that live here that might come out of this. Who knows?”

That morning, Sedgwick’s sons and other family were putting the final touches on Christina’s coffin.

“What do you want to do, Ma?” one son asked Sedgwick.

“Will this fit through my window?” she asked about the wood coffin. “You have a cushion? I have that, too, and we can just put it in the bottom of it and then just put a sheet over the top of it.”

“I have a foam that’s that thick if you want it,” one of the young men chimed in.

“Would that be better?” Sedgwick replied. “It would be for the road over, wouldn’t it? It definitely would.”

The men then carried the coffin from the woodshop to Sedgwick’s nearby home, where family was gathered to say goodbye. Christina would ultimately be buried in her husband’s similar Mormon community in Chihuahua. The Salt Lake City-based Church of Jesus Christ of Latter Day Saints does not recognize these groups as a part of their its church.

What comes next for Sedgwick’s family is an open question.

“A lot of people are going to move out. For now because … we believe the war between the mafia, the cartels, is actually going to get worse at this point,” she said. “A lot of them do not want to be in the middle of it.”

She has a lot of reasons to stay, but some family members would like to see her head to the United States, for the time being at least.

“I’m not sure what I’m going to do. I haven’t decided,” Sedgwick said.

On the other side of La Mora, mourners sang and held each other close as they said farewell to 43-year-old Dawna Langford and her sons, 11-year-old Trevor and 2-year-old Rogan. Their two small coffins flanked their mother’s beneath a wreath of red roses spelling out the word “LOVE.”

Through tears, family members told loving stories about the generous, spirited mother of 13.

Kendal Blust/KJZZ
Family members carry a coffin to the funeral ceremony for Dawna Langford and her two sons Trevor and Rogan on Nov. 7, 2019.

And her husband, David Langford, spoke of the family’s sorrow. The children still recovering from bullet wounds in a Phoenix hospital. And the struggle to forgive, or even understand, the brutal attack.

“My children were brutally, brutally murdered. And my beloved wife. And a lot of you don’t know this, but she was a hero that day, too,” he said. “She told them all to duck and get down to the floor. If you look at that car, every one of them would have been dead if she didn’t tell them and act so quickly. Meanwhile she risked her own life and took a bullet in the head.”

He said their community is forever changed.

“One of the dearest things to our lives is the safety of our family. And I don't feel safe, I haven’t for a few years here," Langford said.

The tragedy already has pushed some families to leave. For others, like Adrian LeBaron, it’s strengthened their resolve to stay.

LeBaron was preparing to bury his own daughter, Maria Rhonita LeBaron, and her four small children. He was the first to find the burnt Chevy Tahoe with their five bodies still inside on the rough dirt road between La Mora and his home in Chihuahua.

He said he feels powerless. But he won’t be run out of his home. 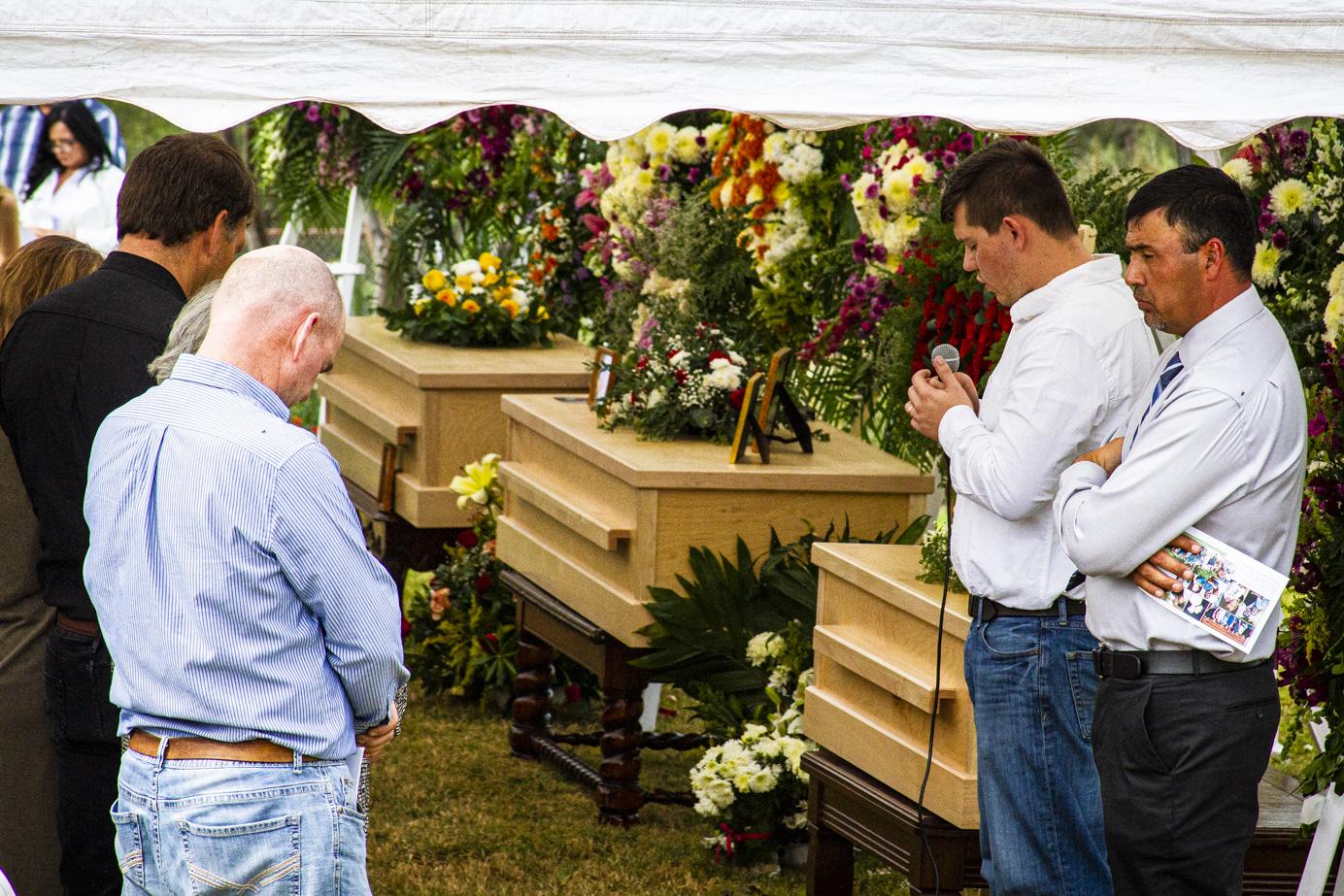 Murphy Woodhouse/KJZZ
Family members of Dawna Langford and her two young sons Trevor and Rogan shared emotional, heartfelt remembrances of their loved ones.

“We cannot let this stop us from living. I live in memory of Maria and Dawna and Christina and those children who died,” he said. “We need to continue traveling that road, as unsafe as it might be.”

He called on his community to rise up and hold the Mexican government accountable to make them safe. And if the government doesn’t protect them, he said they’ll have to do it themselves.

“If that’s the last resort of course we will,” he said. “We’re not going to promote it and we don’t even consider it. But who knows … We need to find reasons to live, or reasons to die. And both are very honorable.”

LeBaron called their communities in Sonora and Chihuahua resilient. And he credits their faith.

“If justice is not given here, justice will be served eventually,” he said. “That’s my faith. That’s my hope. And I live with that certainty. And most of these people, the same. That’s why we’re not afraid.”

As the funeral ended, family and friends carefully loaded the three simple caskets into trucks, and slowly processed through the small town toward the cemetery.

Kendal Blust/KJZZ
The road from the community of La Mora into Chihuahua where the LeBarons live.

Eldon Spencer came all the way from Utah to pay his respects. His family is from nearby Colonia LeBaron in Chihuahua. He said he knew most of the victims.

“It’s family,” he said. “That car that got burned, she used to be my babysitter. I’ve known her my whole life. And I knew her kids, too. And this is my best friend’s aunt, so it’s tough.”

But despite everything, he said, he still dreams of moving here someday.

“Buying a piece of land, having some trees, building a house somewhere.”

Walking with hundreds of mourners, he said in this community, you’re never alone.

“There’s just a lot of people. A lot of support. So everyone keeps going.”

And for many, it will continue to be the place they call home.

EDITOR'S NOTE: This story has been modified to correct the spelling of Langford's name. Several photo captions have also been corrected to reflect that the first funeral ceremony was held on Nov. 7.