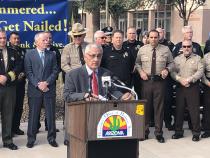 Arizona sheriffs and police chiefs gathered at the Capitol on Tuesday morning to announce a month of heightened DUI patrols for the holiday season.

The annual tradition comes on the heels of a deadly 2018 holiday, when 261 people were killed in DUI-related crashes in Arizona and law enforcement saw a 13% increase in the number of arrests for people driving under the influence, according to the Arizona Sheriff’s Association.

Top law enforcement officials pleaded for the public’s help to stop drunk driving before it starts. That could mean having a plan before you go out for a holiday evening — dedicate a way to get home, whether it’s via an Uber or Lyft or taxi, rather than rely on driving home, said Maricopa County Sheriff Paul Penzone.

“We are here to ensure that you’re families get home safe every night,” Penzone said. “We’re asking you to be a part of that process.”

Staying safe for the holidays also means holding others accountable, not simply yourself, according to Col. Frank Milstead, director of the Arizona Department of Public Safety.

“Probably the most difficult thing for any of us to do as a friend is take the keys away from another friend and get them to not drive,” Milstead said. “It’s a confrontation that none of us want, but I can tell you come morning you’ll be glad you did it.”