The women leading a subcommittee on women’s issues in Arizona prisons say they were ignored and prevented from presenting months of work to an ad hoc committee on earned release credits.

Laetitia Hua, a lawyer who championed criminal justice reform during her tenure as Miss Maricopa County, said Rep. Walter Blackman asked her to chair a subcommittee of the ad hoc committee in July.

“We named it ‘The Dignity For Incarcerated Women Subcommittee’ but I’m pretty sure he forgot about us,” Hua said of Blackman. Representative Blackman did not immediately return a request for comment.

After receiving a confirmation email from Blackman in August, Hua said she worked with several other women for the next several months “to highlight the distinct experiences women go through when they’re incarcerated and when they’re released.”

“Instead of coming up with policy recommendations by myself,” Hua said, “I thought it was more important to hear from those women who personally experienced incarceration.”

Hua says she worked with ASU professor Dr. Peg Bortner and Sue Braga, who was formerly incarcerated, to draft a survey for women who had served time in the Perryville women’s prison. 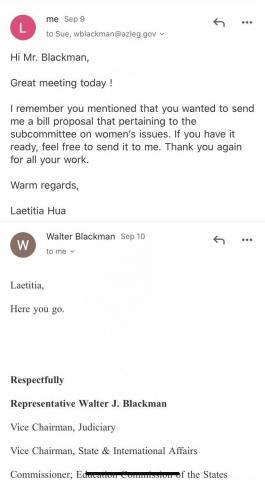 “We asked a variety of questions on child custody, shackling, prenatal care, pregnancy, as well as experiencing trauma and verbal abuse from correctional officers,” Hua said.

Braga, who published the informal, anonymous survey on Facebook, said the results were overwhelming.

“We had more than 200 women respond,” Braga said. “We wanted to produce something that we could take to a research institution that they could build on.”

The survey results showed a majority of the respondents identified as victims of abuse in need of mental health treatment. 95% of respondents rated health care in the prisons as “poor” or “very poor.”

Hua and Braga said they spent about a month working on a presentation for the committee using the survey results and research on best practices from other states.

Hua said after Blackman told her she could present their findings to the full committee, she contacted his assistant to confirm a date.

“She said she had no idea about the subcommittee,” Hua said of Blackman’s assistant. “She didn’t even know there were subcommittees.”

Hua says she was was then excluded from the December 2 agenda, where the ad hoc committee raised and approved several recommendations at its final meeting. None of the recommendations were specific to women’s issues in the prisons. 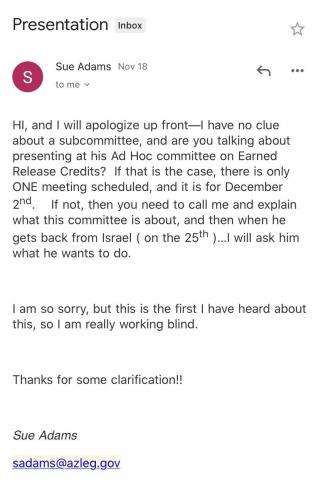 Hua said Blackman apologized to her but did not explain how the communication breakdown occurred. “We had been emailing with them and we sent them our presentation,” Hua said. “It did feel like something was off.”

Hua said if given the chance, she would have shared the subcommittee’s findings for consideration.

“We had an entire page of recommendations,” Hua said. “We looked at other states that have gender-responsive policies. We wanted to talk about how other states provide free transportation for family members of incarcerated people to visit them.”

Hua said the survey shows many of the women incarcerated at Perryville had at some point been victims of abuse. “So one recommendation we wanted to make was that the staff in the prisons be trained to recognize trauma.”

Many of the survey respondents said they had experienced verbal abuse from correctional officers at the prisons. “If you’re a victim of trauma, that’s going to impact your life in very significant ways,” Hua said. “Especially when these women come out and try to readjust to society. I think that experience really sticks with them.”

Braga says she would have liked the committee to hear about Arizona Department of Corrections policies regarding family visitations, which she says prevent contact between children and their parents.

“Your kid can’t sit on your lap anymore after they’re 7 years old,” Braga said. “I saw that. I watched a CO go check a birth certificate one day and then he came over and told the mom that her daughter couldn’t sit on her lap anymore. That can be pretty traumatic.”

Braga says it’s these kinds of stories that should have been presented to the ad hoc committee.

“This is about the women of Perryville, acknowledging what they’ve been through, and learning from it,” Braga said, “so the girls coming up behind them will have a better chance at success.”