Just before 8 a.m. on Sunday, Dec. 7, 1941, the Imperial Japanese Navy launched a surprise attack on Pearl Harbor, the home to the American Pacific Fleet. 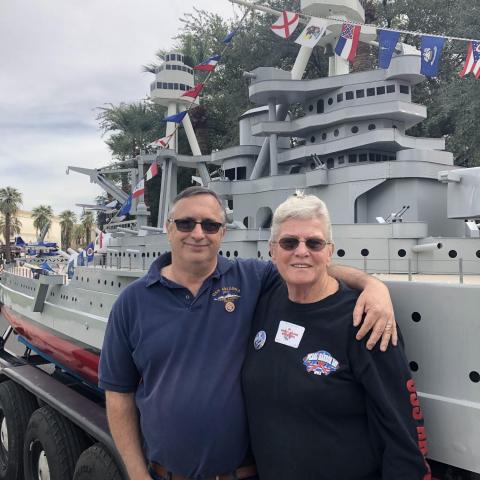 Scott Bourque/KJZZ
Bob Dalpe (left) and Wanda Sarta stand beside Sartain's scale model of the battleship USS Arizona, which sunk during the Pearl Harbor attacks on Dec. 7, 1941. Sartain takes the replica ship on tour to educate people on the history of the USS Arizona.

At the end of the day, close to 2,500 American servicemen were dead. The USS Arizona was at the bottom of the harbor. Nearly 200 American aircraft were destroyed. The Americans were catapulted into World War II. The rallying cry "Remember Pearl Harbor" echoed throughout the nation and motivated 16 million Americans to military service, and the entire economy was mobilized to the war effort.

Seventy-eight years later, Arizonans — very few of whom were even alive in 1941 — gathered to commemorate the lives lost in the attacks, and the ripple effect they've had on American history.

Spectators were treated to a flyover from a B-17 Flying Fortress flown by the Arizona Commemorative Air Force, as well as music from the Arizona National Guard band and the Mesa Caledonian Bagpipe Band. Those who wandered near Jefferson Street also got to meet Wanda Sartain and look at her scale model of the battleship Arizona. Towed on a trailer, Sartain's replica makes the rounds to World War II commemorations.

In 2019, "forgetting" Pearl Harbor is all too easy — of the 335 USS Arizona survivors, only three are alive today. Most other Pearl Harbor survivors are well into their late 90s. Most in the crowd were veterans themselves, or had a family member who served in the military. 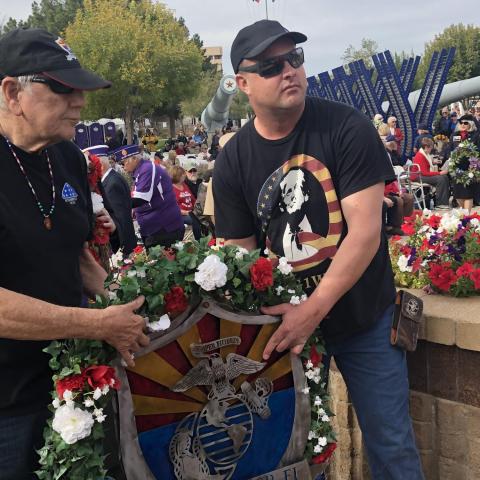 Navy Capt. Andree Bergman is the commander of the Naval ROTC unit at Arizona State University, and was the keynote speaker. She said the attacks, which were designed to demoralize the nation, actually united it.

"It called not only those that were able to serve, but those who would serve in other ways," she said. That call reached deep into the heart of all Americans, and pulled them together to fight for what the country stands for. The call was: Remember Pearl Harbor."

As an officer on warships based in the Pacific, Bergman has sailed into or out of Pearl Harbor dozens of times in her 27-year career.

"I've made so many stops (in Pearl Harbor) that sometimes it felt like a second home," she said. "But the feeling that overwhelmingly pervades my memories is one of humility, of reverence for a place so sacred that I almost felt the need to whisper when I arrived. Especially when I arrived via the sea, as sailors did."

Navy veteran Martha Alderman presented a wreath on behalf of the Saguaro Chapter of the Women's Army Corps Veterans Association. She says it shouldn't just be on the military community to keep the memories of the Pearl Harbor attacks alive.

"I wasn’t there personally, obviously, I don’t have relatives that were there, but it’s just too important," she said. "All veterans need to be mindful of it and all civilians should be as well. It’s just one of our most important days." 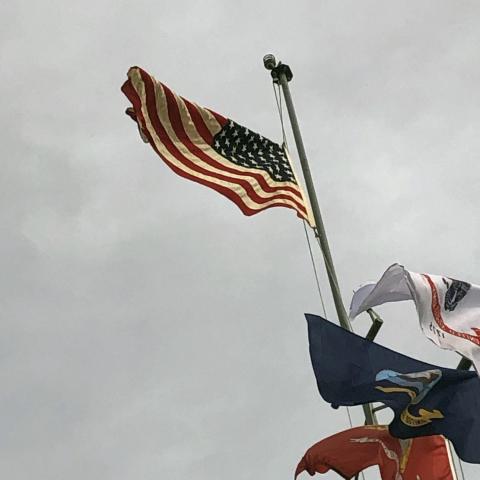 Scott Bourque/KJZZ
The 48-star flag (which flew throughout the war) lies from the signal mast of the battleship USS Arizona, which was sunk on Dec. 7, 1941. Two of the ship's main guns, as well as its anchor and signal mast are on display outside the Arizona state Capitol. 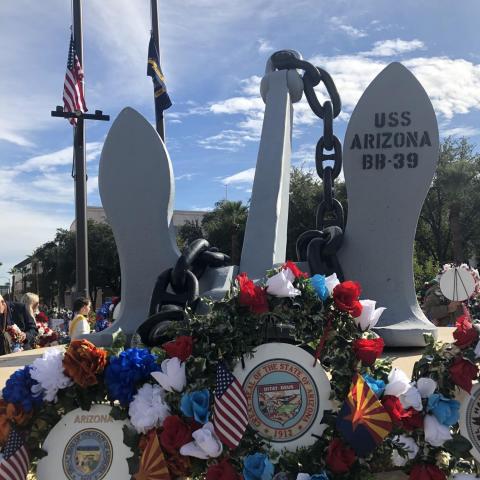 Scott Bourque / KJZZ
Wreaths placed under the anchor of the battleship USS Arizona, which was sunk 78 years ago on Dec. 7, 1941. 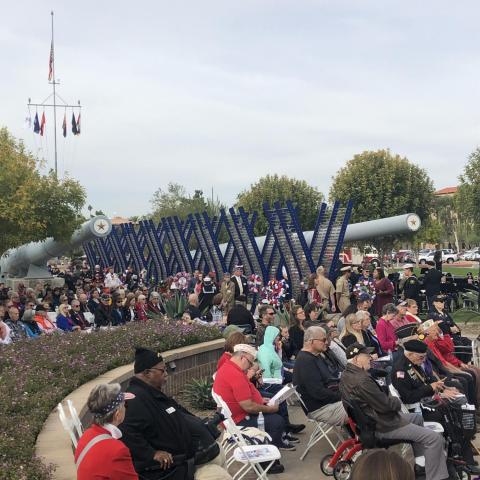 Scott Bourque / KJZZ
A crowd gathers under the main guns of the battleship USS Arizona to commemorate the 78th anniversary of the Pearl Harbor attacks, Dec. 7, 2019. 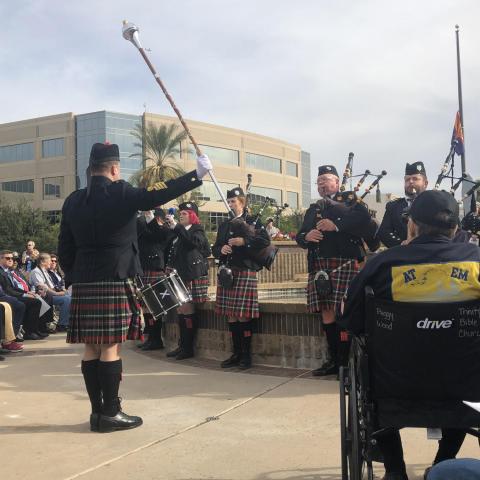