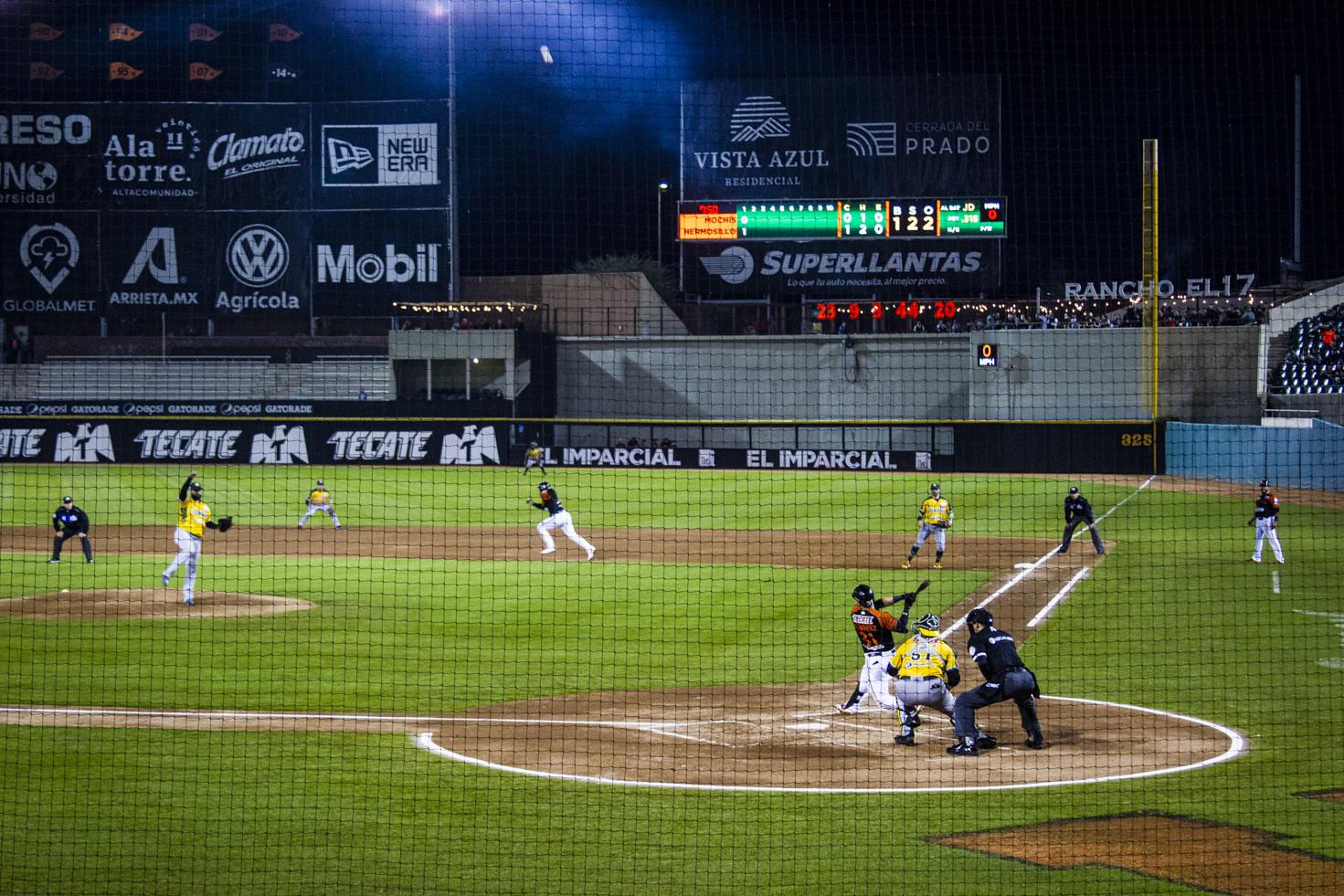 Murphy Woodhouse/KJZZ
The Naranjeros play at their home stadium in Hermosillo, Sonora, on Nov. 21, 2019.

It’s Thursday night at Hermosillo’s baseball stadium, and the stands are packed with fervent fans, cheering on the city’s minor league team, the Naranjeros.

Baseball in Hermosillo is a big party — with family and friends, food and drink, music and dancing. And of course the drama of the game.

But tonight, the Naranjeros are also making history.

“We present to you, Justine Siegal!” the announcer tells the bustling crowd. 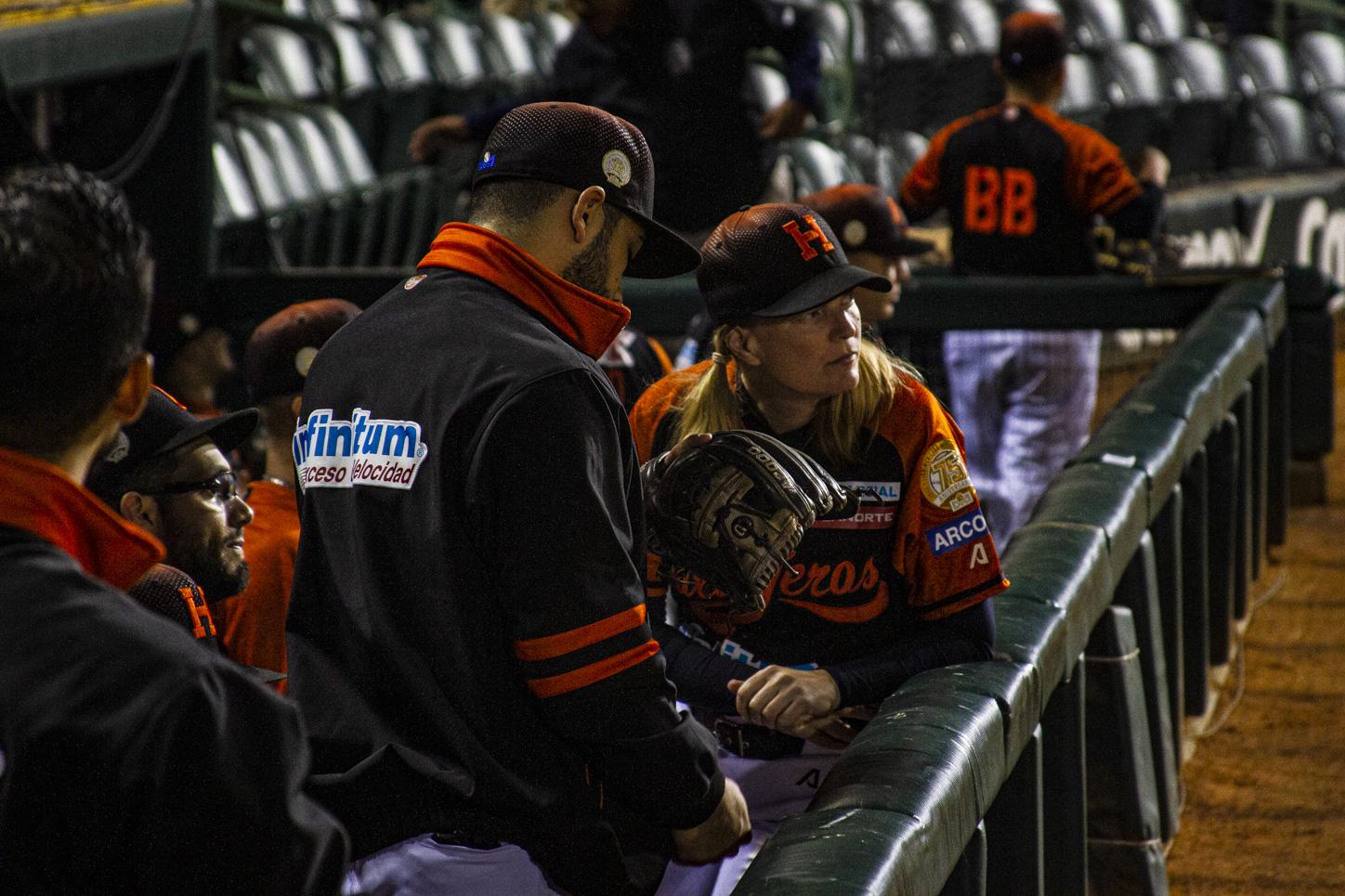 Murphy Woodhouse/KJZZ
Justine Siegal in the Naranjeros dugout as an honorary coach on Nov. 21, 2019.

With two blond ponytails tucked under her Naranjeros baseball cap, Seigal walks onto the field, waving to the cheering crowd. She’s in the dugout tonight as a honorary coach for the Naranjeros, making her the first woman to coach in the league’s history.

Siegal’s used to making history. A decade ago, she became the first woman to coach professional men’s baseball when she worked as a first-base coach for the Brockton Rox in the Canadian American Association of Professional Baseball in 2009.

In 2011, she threw batting practice for the Cleveland Indians during spring training. And in 2015, she was hired by the Oakland Athletics for their instructional league in Arizona, becoming the first female coach employed by a Major League Baseball team.

“Baseball has taken me all over the world,” Siegal said, adding that she’s coached in Japan, South Africa, Mexico and beyond.

Now, she’s bringing the sport to other girls across the United States, and around the world, through her nonprofit Baseball For All.

“Well I mean, it’s my heart,” she said. “I love baseball, and I think it’s the greatest game on earth. But the real important part is making sure girls believe in themselves.”

That’s the message Siegal came to Hermosillo to share as the coach of the girls baseball clinic Mujeres En El Diamante, or Women in the Diamond.

Kendal Blust/KJZZ
Justine Siegal with the participants of the Mujeres En El Diamante clinic in Hermosillo, Sonora, on Nov. 22, 2019.

On Friday, Nov. 22, nearly 100 girls of all ages crowded onto the field where the Naranjeros played the night before.

For many, baseball is in their blood.

Their whole family loves baseball, they said. But while passion for the game runs deep in Hermosillo, it’s still not an option for most girls.

“I would love to play baseball,” said Yahaira López, 16. “ That’s what I wanted to play from the beginning. But they told me that since I’m a girl and boys are stronger, I couldn’t play. They told me there was a softball league I could join.”

It was the same for 12-year-old Renata Domínguez.

Kendal Blust/KJZZ
A girl winds up to throw the ball during the Mujeres En El Diamante clinic in Hermosillo on Nov. 22, 2019.

“The boys always say that girls we’re too sensitive to play,” said 11-year-old Michelle Castillo. But like many of her peers on the field today, she’s not willing to accept that answer.

“I think that a woman should have the same right to do something as a man has,” she said. “For example, soccer, softball, baseball, taekwondo, karate.”

Girls should have the same opportunities as boys, she said.

But many girls in Hermosillo are still being told that baseball isn’t for them.

“If a girl wants to play, she chooses to play softball because they say that is the sport for girls,” said Carla Bustamante, who organized the Mujeres en el Diamante clinic in partnership with the U.S. consulate in Hermosillo.

Bustamante started working in baseball more than a decade ago as the first female sports announcer on broadcast TV in Sonora. Now she’s the team’s head of communications.

She hopes the clinic is a way to open new doors for girls and women in baseball and beyond.

“Because last night we had the Naranjeros playing here, but when are we going to have the Naranjeras, or the women, playing there?” she said. “So it’s a pretty thing to see, like a 'League of Their Own,' that these girls are playing here at the ballpark.”

Being coached by Siegal and hearing her story is a reminder to the next generation that change is possible.

“I think it’s very important when you have a role model and you see that something is possible and you say, ‘I want to be it, too,’” Bustamante said.

Being that example is Siegal’s passion, and she’s seen a lot of change in the sport since she was a girl growing up in Cleveland, Ohio. But there are still a lot of barriers for girls. And while softball is a great sport, telling girls that’s their only option isn’t good enough.

She called it a social justice issue.

“I worry if you tell a girl she can’t play baseball, what else will she believe she can’t do?” she said. “So the next time a girls says, I want to play baseball, let's say, ‘OK, let’s make that happen.’ Let's cheer on our girls on just like we cheer our boys.”