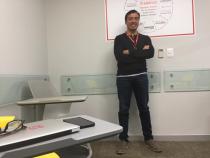 MEXICO CITY — In recent months, a movement in Mexico against machismo and femicides has gained more notoriety. And the recent murder of the wife of the former CEO of Amazon Mexico added fuel to the fire, pushing for changes in the laws.

Juan Carlos García, known for his previous work at Amazon, was accused of attempted murder and domestic violence by his wife, Abril Pérez. García was sentenced, but the judge lowered his penalty and set him free.

Weeks later, Pérez was shot. The murderers are on the run, and so is García, who is believed to be hiding in the U.S. But Pérez’s death ignited a debate over strengthening laws to protect women.

Local and federal congresses in Mexico are working to increase penalties for femicide, rape and domestic violence. The judge on the Pérez-García case is being investigated.