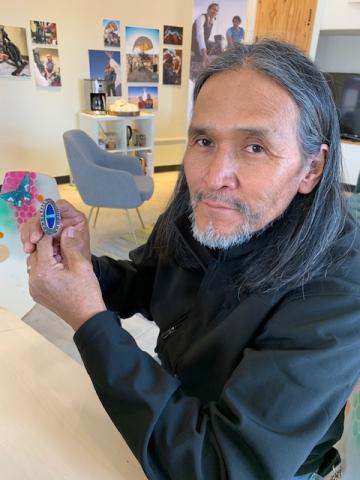 Laurel Morales/KJZZ
Tom Deel wants to offer classes in jewelry making and create one of a kind class rings.

Tom Deel pulled a large silver and lapis ring out of a velvet bag and set it on the table. Deel is soft-spoken, but get him talking about jewelry, and he’s got a lot to say.

“This ring here, if you look at it this way, it looks like a face,” Deel said.

Deel has been silversmithing for decades but wants to reach more customers. At the moment he sells about one piece of jewelry every two months.

“I want to design class rings for high school students, but I want to work with turquoise, coral and all those types of stones,” Deel said.

There’s just one problem: visibility for his company.

“You would never know Deel Jewelry is here unless you know where to find him on Facebook,” said Heather Fleming executive director of Change Labs, a Native business incubator.

She helped come up with the idea for an app called Rez Rising that connects users to Native businesses in the Southwest.

In Navajo, there’s no word for “entrepreneur.” Fleming said when they surveyed people at a how-to-start-a-business workshop, many associated entrepreneurs with greed. She said this belief likely comes from a history of white businesspeople repeatedly taking advantage of Native Americans.

“The irony to all of this is that pre-white people, there was tons of trade going on between native people, between different tribes,” Fleming said. 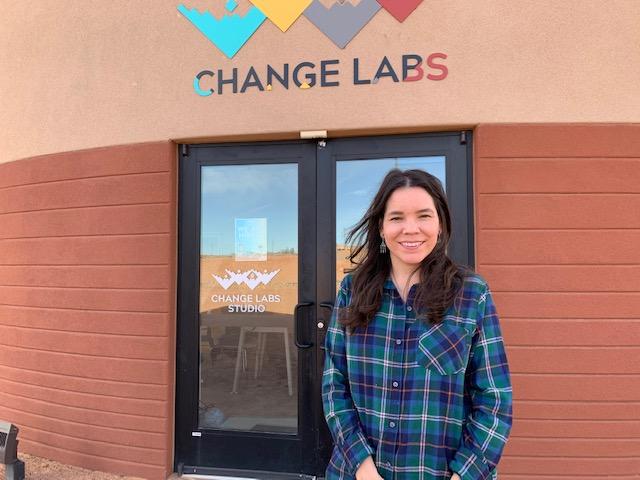 Laurel Morales/KJZZ
Heather Fleming is the executive director of Change Labs. Fleming studied product design at Stanford. After graduating she started her own business in less than 48 hours -- something she says that’s just not possible on the Navajo Nation.

The Navajo economic development office estimates 42% of Navajos are unemployed. But Fleming believes many entrepreneurs are included in that number.

“Native people are hyper entrepreneurial,” Fleming said. “You see it on the roadsides. You see it in the flea markets. But when we talk about business on the reservation people always say, ‘well what business?’ And that drives me nuts. Because it doesn’t look like Sonic or Denny’s or Walmart, then it must not be a business.”

Many Native American entrepreneurs face obstacles. If they want to use Google Business or Yelp to market themselves, they need a physical address. Many roads on the reservation aren’t marked. 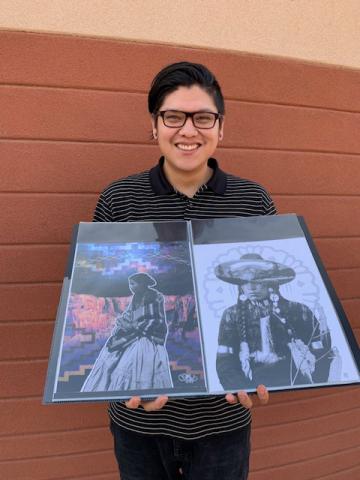 Laurel Morales/KJZZ
Tommy Greyeyes is a Navajo artist who wants to collaborate with other Native entrepreneurs to help them create logos and websites.

And if they want an online presence, they need the internet to keep a website current. Only 53% of Native Americans living on tribal land have access to high-speed Internet, according to the U.S. Census Bureau. Fleming said they also need a platform that’s flexible.

“Business is relatively informal,” Fleming said. “You know, one day I might be at the Tuba City flea market, the next week I’m going to be at Kayenta.”

To get the word out about the app and its almost 600 businesses, Fleming said they have spent about $50,000. Much of that has gone to marketing firms to recruit the first users, to manage social media and to pay for promotional merchandise.

The app developers aim to appeal to tourists driving to the Grand Canyon. Instead of stopping at fast-food chains, they can find a Navajo food stand. Singer Horse Capture, who did the research for the app, said she also wants Rez Rising to appeal to people living on the reservation.

Horse Capture pulled out her phone to demonstrate how it works.

“Right what we have on the homepage is three different search fields,” Horse Capture said. “So you can look for a keyword. You can put in a location, and then we also have categories. The categories are really specific to our audience.”

There’s an agriculture category and a ceremony category. One thing you won’t find is a rating system. Horse Capture says the business owners didn’t want to compete. So users have to try a business for themselves and decide if they like it.