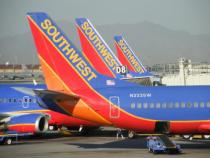 The office of the FAA Inspector General has issued a scathing report finding the Federal Aviation Administration failed in implementing a new safety compliance program with Southwest Airlines.

The report is critical of Southwest, saying the airline risked the lives of 17.2 million passengers by operating dozens of aircraft that hadn’t properly gone through safety protocols. The FAA Inspector General raised concerns with the airline’s safety culture and suggests Southwest "continues to fly unsafe aircraft with unresolved safety concerns."

To talk more about this, The Show spoke with John Goglia. He's co-host of the podcast “Flight Safety Detectives” and is a former member of the National Transportation Safety Board.

Southwest Airlines did not make someone available to talk about the FAA Inspector General’s report. But the airline did send The Show a comment:

Southwest maintains a culture of compliance, recognizing the Safety of our operation as the most important thing we do. We are considered one of the world’s most admired companies and uphold an unprecedented safety record. The success of our business depends, in and of itself, on the Safety of our operation, and while we work to improve each and every day, any implication that we would tolerate a relaxing of standards is absolutely unfounded.

In 2018 the DOT Office of the Inspector General (OIG) initiated an audit of FAA‘s safety oversight of Southwest Airlines referencing an unsubstantiated hotline complaint and our 1380 event. Southwest fully cooperated with the OIG throughout the process, sharing a common goal of strengthening industry and Southwest Safety practices. We’ve had an opportunity to review the report and, among other items noted, we adamantly disagree with unsubstantiated references to Southwest’s Safety Culture. Within the Audit, the OIG also takes a closer look at a few operational challenges that we’ve focused on during the last year—specifically our Weight & Balance program and conformity work on pre-owned aircraft. The OIG data collection for the audit concluded last fall and since that time, we are proud to say that we’ve made significant progress on these two primary operational items mentioned in the report.

We added commodity tracking in all of our domestic Stations by the end of 2019—equipping Employees to further baggage count accuracy and enhance the integrity of our Weight & Balance Program. We’ve bought and issued more than 3,400 scanners, and currently scan more than two million bags per week. Since implementing the scanners, we’ve seen substantial improvement in our Weight and Balance Program accuracy and consistency across our system.

Our Tech Ops Team also has worked diligently to ensure that each of the 88 pre-owned aircraft cited in the report have either completed a comprehensive physical inspection, from nose to tail, or are currently in the inspection phase, with 80 aircraft complete and the remaining eight aircraft currently in maintenance heavy check for review. We are well ahead of the FAA’s original July 2020 deadline to complete inspections.

The proposed civil penalty referenced by the FAA in their response to the audit pertains to data processing issues that occurred while transferring aircraft weight information from one Southwest computer system to other computer systems in the spring of 2018. The issues were identified and reported by Southwest to the FAA in late July 2018 and fully resolved in early August 2018. Since discovering the data discrepancy in 2018, in coordination with the FAA, Southwest has enhanced its weight and balance program by implementing additional controls to strengthen the process of managing aircraft weight data in our systems. We are monitoring the performance of our overall weight and balance program closely to support our unwavering commitment to Safety, compliance, and continuous improvement. We continue our work with the FAA to demonstrate the effectiveness of our controls and processes and seek to achieve an effective and appropriate resolution to the proposed penalty.

Our friends, our families board our aircraft and not a single one of us would put anything above their safety — this mission unites us all.