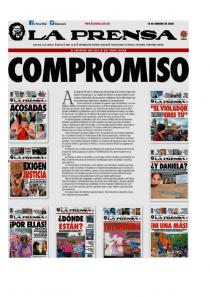 La Prensa
On Feb. 14, 2020, Mexican paper La Prensa stated on its cover that their coverage to violent femicides has helped bring a light to those crimes.

MEXICO CITY — The gruesome murder of a woman in Mexico City this week is triggering major protests this weekend against gender-based hate crimes. People are outraged over the publication of photos of the victim's body — and comments from Mexico's president about femicide.

Twenty-five-year-old Ingrid Escamilla was killed and dismembered, allegedly by her boyfriend.

Some papers published photos of her body, igniting a debate about press freedom.

The president had stated femicide is relevant, but the media is distorting facts to attack him.

Mexican women and girls, and advocates for women's rights, are stepping up their demands for justice.  They're accusing the president of indifference.