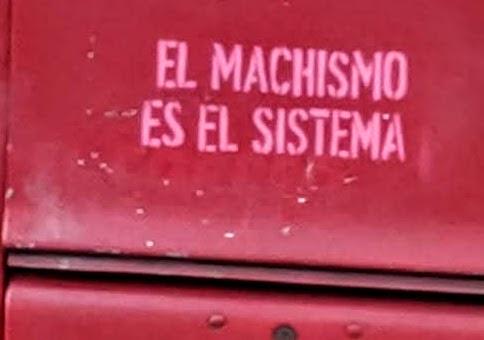 Rodrigo Cervantes/KJZZ
Graffiti on a mailbox in Mexico City after a feminist protest. It reads: "Machismo is the system."

MEXICO CITY — Hundreds of women’s rights activists marched in Mexico City on Friday and Saturday demanding that the government stop the rise of femicides in the country. During the protests, many painted messages on the facade of Mexico’s National Palace. And on Monday, President Andrés Manuel López Obrador asked them to stop damaging monuments.

“I want to ask the feminists, with all due respect, not to graffiti our doors and walls. We are working so that there are no more femicides. We are not simulators, and don’t wait for us to act as repressors,” said the president.

López Obrador has been accused of indifference to hate crimes against women. Official data say femicides in Mexico have risen 137% in five years. But the president has blamed capitalism for morally damaging the society and the media for distorting facts.