Outrage In Mexico After Murder Of 7-Year-Old Girl 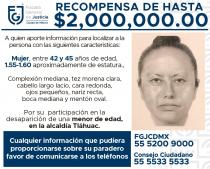 MEXICO CITY — Last week, the gruesome murder of a woman in Mexico City sparked protests against the rise of femicides. And this week, the outcries against gender-based hate crimes continue after the abduction, rape and death of a 7-year-old girl.

Fátima Aldrighetti was kidnapped after school. Days later, Fátima’s body was found wrapped with trash bags. Local authorities are offering a reward for information, but many accuse the government of not doing enough to protect women and children.

“These crimes can’t just be solved with police, jails and a firm hand, but by moralizing and purifying the nation," López Obrador said.

The president faces criticisms for his alleged lack of empathy and strategies to fight femicides.