Untold Arizona: The Baron of Arizona

Download mp3 (6.99 MB)
Marshall Trimble
James Reavis played by Vincent Price in the 1950 film "The Baron of Arizona" is nearly hung by an angry mob of landowners.

Less than 20% of Arizona is privately owned. In a sense, it belongs to everyone. No one person can claim this land. But one man got awfully close — by becoming the Baron of Arizona.

The tale was dramatized by Hollywood, casting the villainous heartthrob Vincent Price as the suave baron.

"The Baron of Arizona" hit the silver screen in 1950. But the baron himself conned Arizona nearly a century earlier.

“And he had a knack for forgery," Trimble said. "And so, he could forge his commanding officer’s signature on leave papers. And finally, he just wrote himself a permanent leave.”

Trimble has literally written the book on the hucksters and con-men who came to Arizona looking for suckers.

"As P.T. Barnum said: There’s a sucker born every minute," he said. "And wherever there’s a buck to me made, there’s a con-man out to get it."

Reavis wanted more than a buck. And he devised a grand scheme to get it — one that took advantage of the United States’ recognition of Spanish and Mexican land grants after the Mexican-American War.

Reavis nearly conned his way into about 12 million acres from where Sun City sits today all the way to Silver City, New Mexico.

The scam relied on forgeries he left in church records from Mexico City to Madrid, inserting a fictitious family into ancient documents.

The trap was set.

“And now, he’s missing just one thing," Trimble said. "He needs an heir. And in California, he finds a little 16-year-old orphan girl, and he convinces her that she looks just like the Peraltas - how would he know? They didn’t exist."

But he convinced her, too — and married her. And she believed she was the baroness — Doña Sophia Micaela Maso Reavis y Peralta de la Cordoba — even after Reavis' scam had been revealed.

And the scam was revealed — just not before he collected more than $5 million from the Southern Pacific Railroad, mining companies and landowners like J. Marion Sears.

Sears used to have a home where downtown Phoenix sits today. It was a pretty piece of land even then. Reavis saw an opportunity. 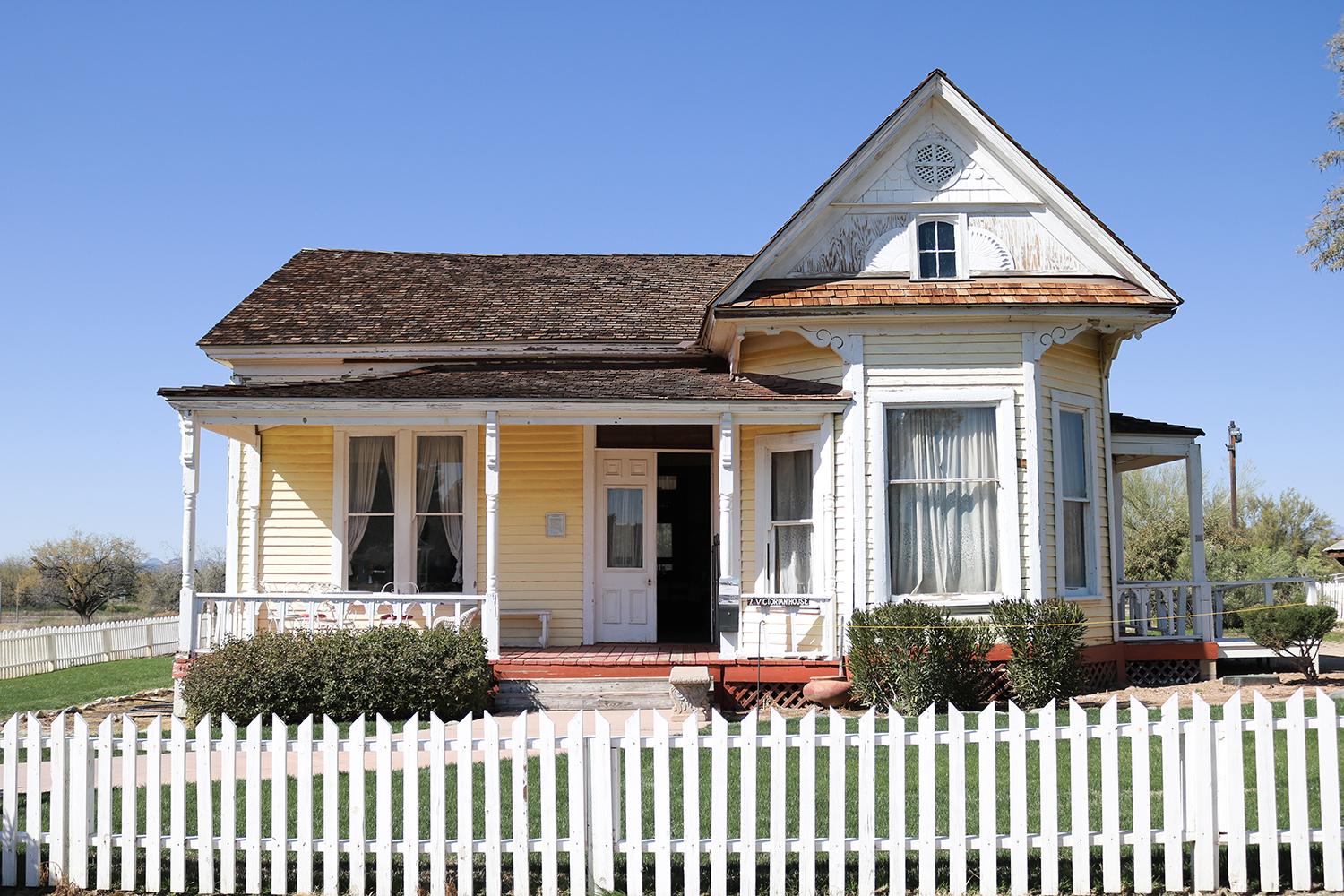 Katie Campbell/KJZZ
J. Marion Sears' Victorian home was once located in what is now downtown Phoenix. Sears was conned by James Reavis, who became known as the Baron of Arizona.

Karen Chen is a longtime volunteer at the Pioneer Living History Museum, where Sears’ Victorian house sits today. Museum volunteers found a deed from Reavis for Sears’ property for $160.

“You know, a lot of them were afraid that they were going to lose all their land and everything on it," Chen said. "So, Sears just definitely took the bait and signed the money over.” 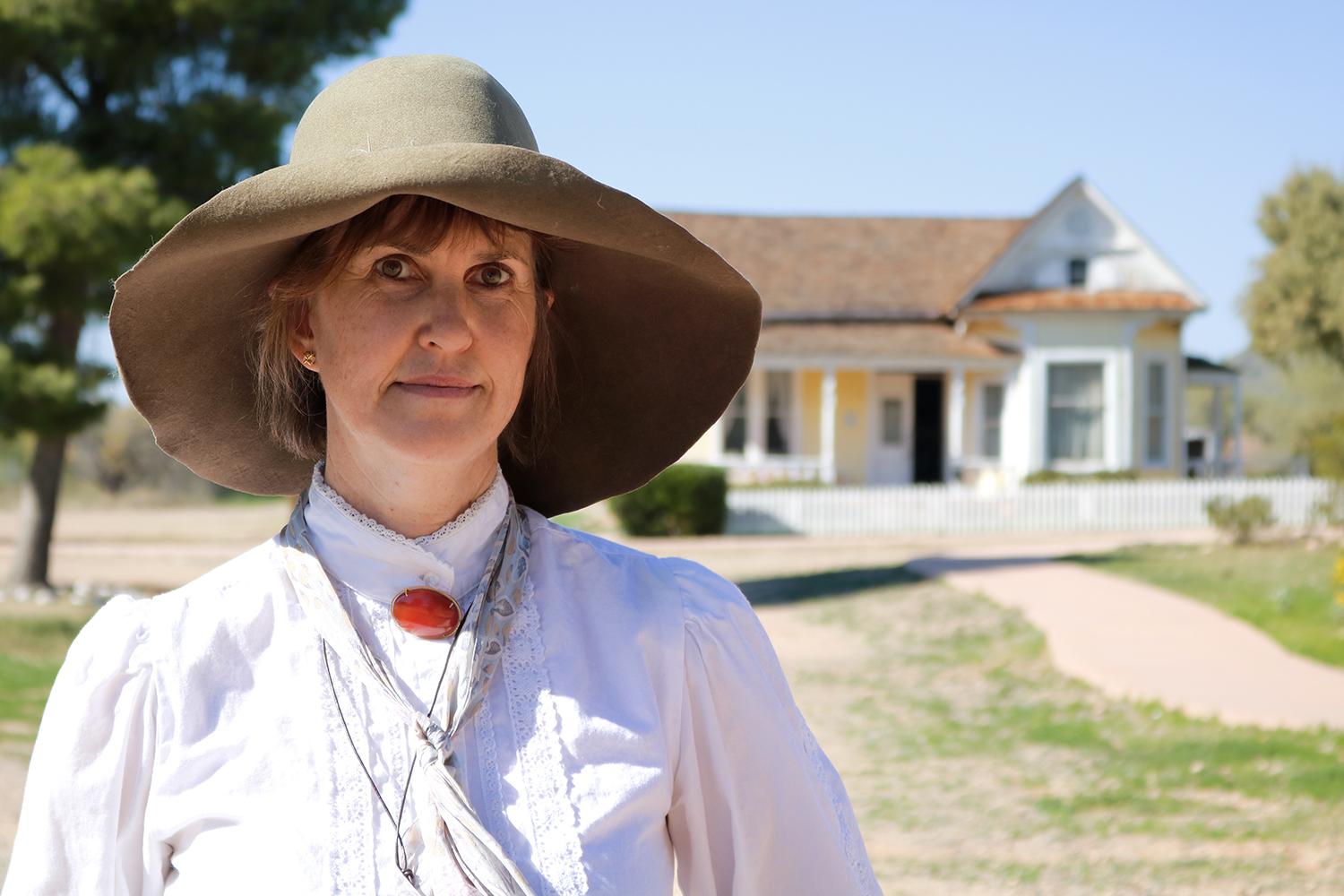 Back then, folks were suspicious, particularly of strangers trying to gobble up their land.

But Sears was not suspicious enough, Chen said.

The law did catch up to the baron. The federal government was going to pay Reavis millions to make him disappear, but he decided to sue for even more.

“He told such a good lie that, I think, maybe he started to believe it, too," Trimble said. "But he made his fatal mistake when he sued the government. Because then, it’s time to get serious and do an investigation.”

Investigators found inconsistencies with the ink, the type of pen he’d used and even paper bearing the watermark of a mill in Wisconsin, dating back long before Wisconsin was on the map.

But really, Trimble says the baron went down because of a key flaw that thwarted many like him: "Greed, greed, greed."

Marshall Trimble
James Reavis' con was exposed, and the Baron of Arizona was found guilty of fraud in 1895. He served two years in prison and paid a $5,000 fine.

Arizona’s reputation for greed and violence certainly left its mark. But the skepticism the people showed for a man who dared call himself baron may have left a greater impression.

Paul Bender is a law professor at Arizona State University and an expert on the state Constitution. He said that skepticism Reavis faced, that frontier mentality is what took root.

“That’s the feeling I get from the original Arizona Constitution," he said. "Leave us alone. Don’t push us around. Give us some tools to protect ourselves against the horrible, monied interests that come in and try to take over."

After all, Bender said, the feds weren’t going to be a champion for Arizona.

Even Reavis, who’d made a sucker of the government itself, seemed to escape the full force of justice.

The Baron of Arizona, for all his scheming, was found guilty of fraud in 1895. And his punishment: He served two years in prison and paid a $5,000 fine.

Marshall Trimble
Vincent Price played James Reavis in the 1950 film "The Baron of Arizona."
The Show