Rob Reiner To Be Honored At Sedona International Film Festival 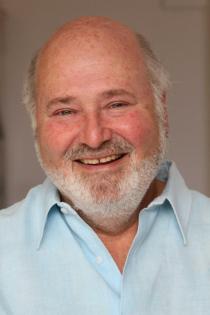 Actor, director and producer Rob Reiner has been in Hollywood all his life.

His father is legendary comedian and actor Carl Reiner, and his mother is jazz singer Estelle Reiner. And he got his big break as an actor, as Michael "Meathead" Stivic on the TV show "All in the Family."

After that, Reiner made a name for himself as a director, racking up hits like this "Spinal Tap," "Stand By Me," "A Few Good Men," "The Princess Bride" and "When Harry Met Sally."

Reiner is in Arizona this weekend to receive a lifetime achievement award at the Sedona International Film Festival.

The Show got the chance to chat with him ahead of the event.

So much of what you've done has turned into movie classics 20 or 30 years later. Did you ever have a sense at the time that these would become so beloved that they would become classics?

You'd never know. When you're making a picture, you don't know what's going to stand the test of time, what's going to last. And I guess that's what classics are, the things that, you know, over the decades, they — people still watch them and still enjoy it. But you don't know when you start out. You never know. You hope you're making something that people will connect with. And, you know, if they happen to connect with it, and you've tapped into something that's, you know, kind of universal on a human level, then I guess that they they last.

What makes things like "When Harry Met Sally" or "Stand By Me" — or you work on "All in the Family" — makes them timeless? What are the things that make them still resonate?

I think the main thing is that they connect to something very universal and basic and human in all of our experiences. I mean, I look at a film like, either "It's A Wonderful Life" or "The Wizard of Oz" — which are two of my favorite films. They're both classics. And I think the reason is, I mean, you look at a film like, you know, like "Wizard of Oz" and essentially it's about somebody who is lost and has to go on a journey to find their heart, their courage, their mind. And once they have themselves, they feel comfortable about being at home, you know, which is who they are. And I think that's something that everybody goes through. We all go through searching, wanting to know what our identity is, and all of those things. So, I mean, in the films that I've made, you know, you don't know. But I mean, you try to do something, like in "When Harry Met Sally." You know, is it a basic thing of men and women? What is that dance that happens between men and women? And if you touch on some things that resonate with people, and it's basic human ... experience, then it lasts, I guess.

You're the son of Hollywood legends, and you you have been in and around this industry your entire life. How do you see thechanges that are taking place in Hollywood now? Especially as you look at the #MeToo movement and some of the big shifts that are happening.

I mean, you know, #MeToo is an important movement. And and we're we're having a very important dialog about what constitutes, you know, harassment and sexism and misogyny and all that. And that's an important dialog to have at any time. The big shift that I see in Hollywood and in making films or making television shows, is that we're also very fragmented as an audience. It's hard to reach a big audience because there's, you know, there's something like 500 television shows and over 60 outlets that you can find things. People don't watch things at the same time, so they don't have a shared experience. I mean, when we were doing "All in the Family," there were only three major networks, and there was no DVR, no TiVo or anything like that. If you wanted to see the show, you had to watch it when it was on. And we were a country of 200 million people. And on any given night on Saturday, 40 to 45 million people would be watching the show and sharing that experience. Now, if you have a hit show, if you can get 10 million people to watch, that's a big deal. And like I say, there's so many channels like you'll say a show that you love. And I may love that show, too, but we can't talk about it because, "Don't tell me. I'm on only on episode two," or "I'm only on the first season," you know? So everybody's a spoiler alert to everybody else. So you can't ever talk about the show.

In light of this kind of fragmentation, can you as a filmmaker, as a storyteller, still tell those universal stories and strike some kind of chord with people that will continue to resonate?

Well, you know, I don't know. All I know is that you learn to embrace the experience of making the movie or making the television show. You have to enjoy that. And because you don't know what is going to either resonate or what is going to be embraced by people. So you have to take pleasure in doing, in the making of something. And, you know, the world will decide what lasts and what doesn't last.