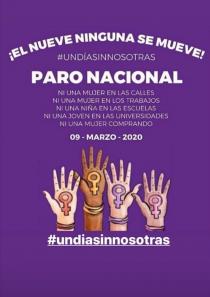 MEXICO CITY — After the increase of hate crimes against females and the recent gruesome murders of a woman and a 7-year-old girl, many women in Mexico are preparing an unusual protest — and it’s already becoming controversial.

Feminists plan protests on March 8, which is International Women’s Day, as well as the following day. Women all over Mexico are invited to avoid working, shopping or doing any public activity for "A Day Without Women" on March 9.

The women’s strike was promoted by women’s rights organizations on social media and soon went viral. However, Mexican president Andrés Manuel López Obrador accused his right-wing opponents of being behind it.

Politicians, public officials and political parties made public their support to the protest, but some feminists are calling them "opportunists," while accusing the president of indifference.

López Obrador’s wife, Beatriz Gutiérrez, showed support for the protest at first, but soon after she pulled out and called for a rally in favor of women and her husband, the president.