The Top Issue For One Arizona First-Time Voter? Health Care 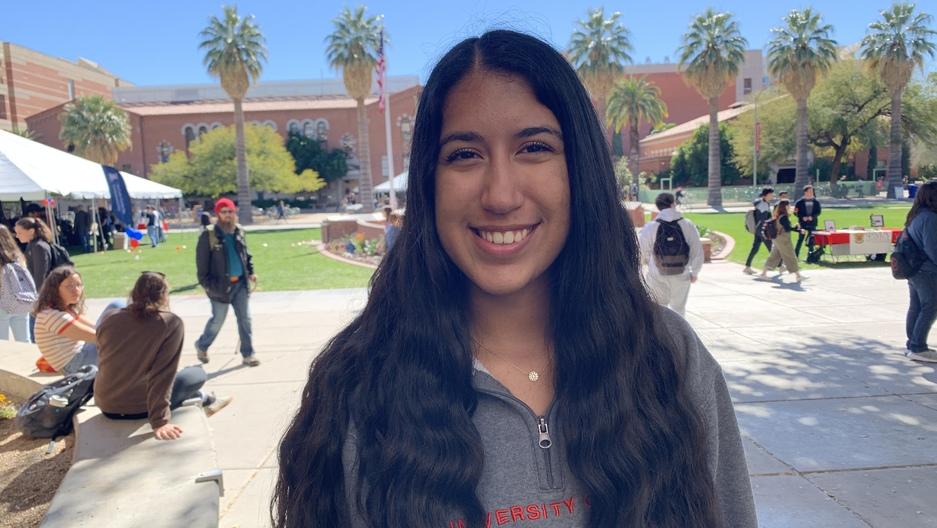 Michel Marizco/KJZZ
Adela Diaz, who will be a first-time voter in 2020, poses on her campus at the University of Arizona in Tucson in early 2020.

This story is part of "Every 30 Seconds," a collaborative public media reporting project tracing the young Latino electorate leading up to the 2020 presidential election and beyond.

As the 2020 presidential campaign unfolds, Adela Diaz is keeping her eye on one main issue: health care.

A public health major and freshman at the University of Arizona in Tucson, Diaz said she is concerned about the disparities in health care access among minorities in the US. Her interest in the topic began during high school, when she volunteered as a tutor for English-language learners who had arrived in Phoenix as refugees and migrants. Many of them struggled with poverty.

This November will be the first time Diaz — an 18-year-old, third-generation Mexican American — will be able to vote in a presidential election. She has already been registered to vote for some time.

What the candidates include in their health care plans will help Diaz decide how to cast her vote in Arizona’s March 17 Democratic primary, she said. She hasn’t yet decided on a candidate. For now, Diaz said, Elizabeth Warren "may be my favorite."

“So hearing some good plans for 'Medicare for All' and 'Medicare for All' in three years — that’s something that Elizabeth Warren brought up in the Feb. 7 debate,” Diaz said. “She said she was going to work on getting the most common prescription drugs to be more affordable to the average American.”

This year, Latino voters like Diaz are projected to be the biggest minority voting bloc in the country, surpassing black voters for the first time. In Arizona, Latinos make up about a third of the population and about a fourth of the electorate, one of the highest rates in the nation, according to the Pew Research Center. In the 2018 midterm, a surge in Latino voters in the state tipped a hotly contested Senate seat from Republican to Democrat.

As a voting bloc, Latinos in the United States are also overwhelmingly young. In Arizona, they could influence the March 17 primary — and therefore help send a large group of delegates to help secure the Democratic Party nomination.

And candidates are paying attention. They are sending groups to college campuses to raise their profile among young voters. Diaz is often approached by campaigners and get-out-the-vote organizations outside the student union at the University of Arizona, where she spends most of her time studying.

Diaz is the kind of voter who will watch the Democratic debates while on the phone with her dad, George Diaz, who lives back home in the Phoenix area. The elder Diaz is a lobbyist to Arizona’s government on behalf of the city of Buckeye, a Phoenix suburb. He believes his work helped inspire his daughter’s interest in politics.

Adela Diaz graduated at the top of her class in high school and is an honors student in college.

Adela Diaz said she became interested in a career in public health after taking a course on the challenges minority populations face. It reminded her of the refugees and immigrants she taught in Phoenix.

→ Every 30 seconds, a young Latino in the US turns 18. Their votes count more than ever.

“Taking that class made me realize how many odds are against them they don’t even have control over,” she said. “It’s like, these things — yeah, they’re struggling in school. Their home life may not be the best. They’re hungry, or maybe one of their parents may not be with them for whatever reason. It’s not fair, and I want to help fix that.”

George Diaz said his daughter’s focus on health care shows that Latino voters often care about the same things important to all Americans.

“It goes far beyond the issues people typically associate with Latinos, right? Immigration, 'DREAMers,' that kind of thing. Of course those are important,” George Diaz said.

"My daughter represents her generation very well in that she has those concerns specific to the Latino community and at the same time she has the same concerns as everybody else."
— George Diaz

Race issues are also at top of Adela Diaz’s concerns this election.

“I’d like [candidates] to show some kind of commitment to accessing the non-white citizens of America. That’s something that turned me off so much about [Pete] Buttigieg, his lack of support from African Americans and his lack of defense for that,” she said. “But also I feel that Joe Biden kind of flaunts his strong African American support when it’s not really helping him out much. He’s not coming to the front of the polls like everybody thought he would.”

Diaz said she worries about how the current health care system excludes so many people, particularly the most marginalized. That’s what’s shaping her opinion of the candidates.