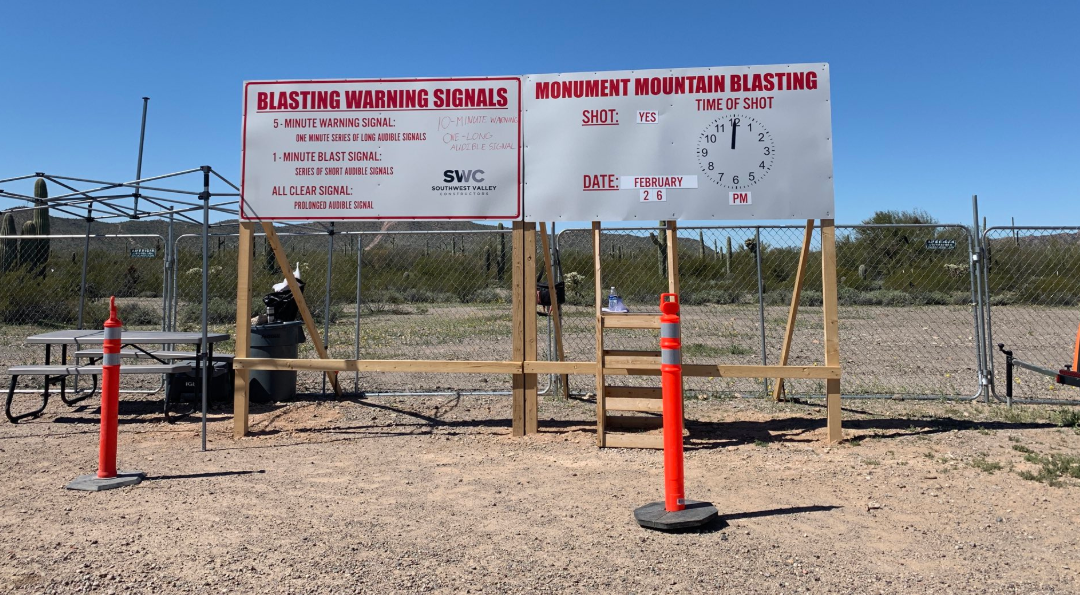 Michel Marizco/KJZZ
The U.S. government demonstrated how it’s blasting a federal monument to prepare for a new border fence along the Mexican border in southern Arizona on Wednesday.

The U.S. government demonstrated how it’s blasting a federal monument to prepare for a new border fence along the Mexican border in southern Arizona on Wednesday.

Border officials kept journalists a half mile away from the blast site on the slope of Monument Hill near Lukeville, Arizona. Crews had buried hundreds of pounds of ammonium nitrate in dozens of holes along a 250-foot-long stretch of the hill’s eastern slope to demonstrate the blast.

The Border Patrol contends that no archaeological sites were found on Monument Hill either now or when border fences first went up in the area in 2007.

The vehicle barrier on the first half of this short video is being torn out and replaced with the border wal toward the end. This between Quitobaquito Springs and Monument Hill on Organ Pipe Cactus National Monument. pic.twitter.com/96ece1CSAg

"All of those cultural surveys were coordinated with the Tohono O’odham nation, nothing was found at that time. We’ve done surveys again most recently for this particular area. again nothing found for this construction corridor," said Paul Enriquez, the Border Patrol’s Border Wall Program management office.

Tohono O’odham Nation leaders say the bones of Apaches are scattered on that hill.

Local archaeologists have pottery shards within feet of the construction zone nearby to Monument Hill and fragments of human remains were found in the area of construction last November.

Part Of Federal Monument Blown Up For Border Fence