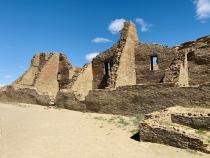 Navajo Nation
Chaco Canyon was once a hub of indigenous civilization. Many cultural resources and sacred sights remain.
Coverage of tribal natural resources is supported in part by Catena Foundation

The federal government released a new management plan for oil and gas drilling in the Greater Chaco Canyon area. Conservationists and some tribal members say it doesn't go far enough to protect the environment and cultural sites.

The Bureau of Land Management projects as many as 3-thousand new oil and gas wells in the area surrounding Chaco Culture National Historical Park. That's 33 fewer wells than what was initially proposed.

In December, Congress passed a bill that gave tribes money to study impacts of fracking in the area for one year.

"All the hazardous air pollutants, all the water, and toxic waste being dumped on lands in and around the greater Chaco landscape the main thing is we're worried about future generations," Atencio said.

Atencio refused to sign away his land but said he will likely be outnumbered by relatives who want a steady income.

People have until the end of May to comment.