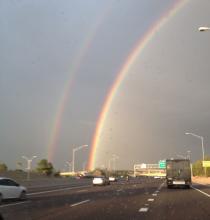 (Photo by Tracy Greer - KJZZ)
A rainbow emerges during the rainy commute in Phoenix on June 4, 2015.

The small amount of rain in the Valley this morning has already broken records.

The 0.02 inches that fell at the Phoenix Sky Harbor Airport is the average amount of rain for the month. Chris Cullman with the National Weather Service said that any amount of rain this early in June is rare.

Cullman said there is still chance for more rain this evening. He said there is also potential for heavier rain next week due to pressure from Hurricane Blanca.