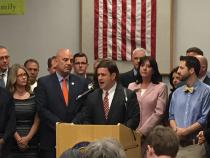 Faced with the reality that Arizona spends the least amount of state money on K-12 education, Gov. Doug Ducey outlined a proposal on Thursday that would increase the amount of money the system gets from the state land trust.

Ducey said it would bring $1.8 billion to schools over the next five years. But what exactly is the state land trust?

Ducey’s plan has drawn both support and criticism and we’ll hear both perspectives, starting with Todd Sanders, president and CEO of the Greater Phoenix Chamber of Commerce.

People who are less enthusiastic about the governor’s proposal are taking more of a wait-and-see approach. One notable exception to that is Ann-Eve Pedersen, president of the Arizona Education Network.