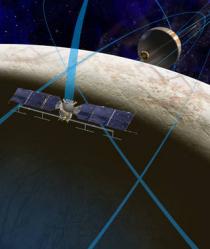 (Photo courtesy of NASA - JPL-Caltech)
This artist's rendering shows a concept for a future NASA mission to Europa in which a spacecraft would make multiple close flybys of the icy Jovian moon, thought to contain a global subsurface ocean.

NASA is sending a mission to see if Europa, an icy moon of Jupiter, has conditions suitable for life, and three Arizona State University scientists are involved with the mission's instruments.

The scientists from ASU’s School of Earth and Space Exploration will be part of the team investigating whether conditions suitable for life exist on Europa, one of Jupiter's moons, as part of NASA's newly announced robotic mission.

The mission, scheduled for launch in the 2020s, will follow up on the results of NASA's Galileo mission from 20 years ago. That spacecraft found the surface of Europa to have a miles-thick shell of ice covering a salty water ocean.

Observations from the Hubble Space Telescope have also revealed that Europa erupts plumes of water vapor a hundred miles high or more.

A thermal instrument known as the Europa Thermal Emission Imaging System, or E-THEMIS, will scan the surface of Europa at high resolution for warm spots, according to one of the scientists working on the project.

The E-THEMIS instrument will be built at ASU.