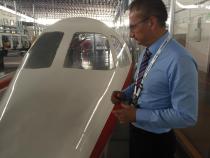 Rodrigo Cervantes/KJZZ
Federico Pérez, planning secretary of the Querétaro University of Aeronautics, shows plane components and parts used by students in their facilities.

MEXICO CITY — While some states in the U.S. plan to reopen businesses closed due to the coronavirus pandemic, the Mexican government is being pushed to allow certain industries to operate again — and part of that pressure is coming from Washington.

But business groups push to at least reopen the supply chain linked to the U.S. and Canada, where the automotive and aerospace industries stand out.

President Andrés Manuel López Obrador said money can’t be above all like a god. But he’s been criticized for not providing any economic relief and allowing the construction of state-owned enterprises, including an airport and an oil refinery.

The Pentagon is urging Mexico to allow defense suppliers to operate.