'The Death Of Expertise': Why Americans Think They're Smarter Than The Experts 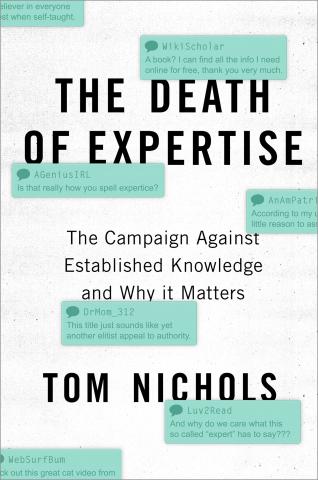 Oxford University Press
"The Death of Expertise" by Tom Nichols.

As pandemic-related business closures have been in effect, we’ve seen near-record unemployment claims and an economy that saw a first-quarter GDP drop of nearly 5%. That reality has been at the center of arguments about balancing health with long-lasting economic damage.

Another layer that was gaining traction on social media with the daily White House Coronavirus Task Force press conferences was whether the medical professionals and scientists were being realistic, and whether the elected officials and political appointees actually knew more than they did.

The Show spoke to Tom Nichols, a professor and the author of "The Death of Expertise," about how many Americans believe their knowledge matches that of the experts.

How much does it feel like we're witnessing a dismissal of expertise on a nearly daily basis right now?

Unfortunately, I feel like the book is coming to life right in front of me — and faster and with greater effect than I had hoped. I had always thought that one of three things would really bring home the importance of "The Death of Expertise": a war, a depression or a pandemic. And whenever I spoke about this issue, those were the three things I would bring up. So it looks like we may end up with two out of three of those, because we certainly have a pandemic, and we could end up in a depression. And it seems like our national leaders just don't seem to care very much about expertise. And they're relying more on political loyalists than they are on scientists or others who might know what they're doing.

There is that delicate ego we're talking about here, right? Where expertise — "Wait a second. No one knows more than I do." — is that more of a human condition, more of an American condition?

Absolutely. Although one of the reasons I wrote the book is that it seems to me over the past 30 years or so that the United States — and, as it turns out, a lot of other countries — are in the grip of an epidemic of narcissism. Because that's really what makes people resistant to accepting expert advice. And, of course, experts can get things wrong. I mean, doctors make bad diagnoses. Experts are human beings like everybody else. But we've gone from a culture in which we are suspicious of experts — or eggheads or intellectuals — to a country of people who really feel like they're smarter than experts. The kind of people that walk into a doctor's office and they say, "Let me explain to you what I have and what you're going to prescribe." That's different. That's new. And I think the president and the people around him are kind of the ultimate expression of that. That, as you say, the smartest person in the room, you know, "Nobody knows more than I do about it." But that's actually the expression of a lot of people in the United States who feel that way. And it's going to get us — I think it's already led us into trouble, and I think it's going to get worse.

To what extent is this parallel to the aspect that a lot of people think that opinion is the same as fact?

I think part of the problem is that over the past few decades we've been raised and we live in a society where we've been taught that opinion is the same thing as fact. That if you feel something strongly enough that it's true. We even see this in in education, where we actually ... spend a lot of time asking students how they feel about things rather than what they're learning. We have become very solicitous of each other's opinions, even down to constantly taking polls about everything. Television shows asking us to send in our questions, you know, asking us what we think. So this has been a social movement for a while now to replace fact — which is exclusive, unfortunately — with opinion, which is inclusive and feels better. It feels more democratic, even when it's wrong.