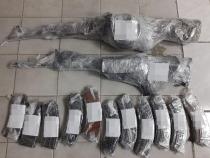 State Security Secretary
Some of the weapons and ammunition seized in operations in northern Sonora in mid-May, after major gun battles in Magdalena.

The week after high-profile violence rocked a Northern Sonora town, Mexican authorities made multiple arrests in the area.

Earlier this week, four men were arrested in Magdalena and several weapons and dozens of rounds of ammunition were seized. Last week, a former mayor of the town was killed in a gun battle that claimed four lives and shut down a major interstate.

“The police will continue to assist with security in the state’s northern municipalities,” said State Security Secretary David Anaya Cooley.

Local, state and federal forces have increased their presence in the region in recent days. Outside of Magdalena, arrests and seizures of assault-style rifles and several hundred rounds of ammunition were made in nearby Imuris. Along with several additional arrests, two Barrett 50-caliber rifles were among the weapons seized further west in Caborca.

Also seized were two vehicles, one with “artisanal armor,” according to a state release.