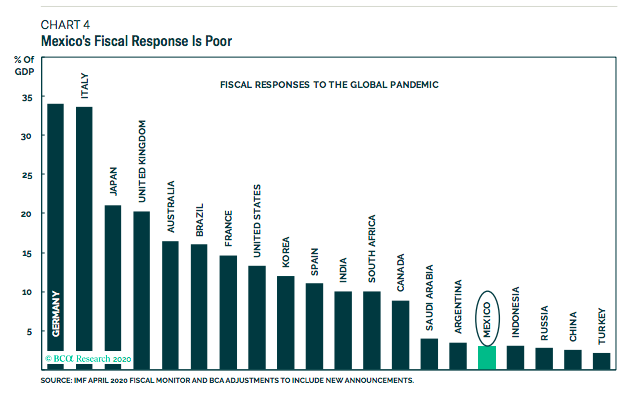 BCA Research
According to a BCA Research study, given the Mexican president's ideological approach to fiscal frugality, his government’s fiscal response to the COVID-19 pandemic to date has actually been less than what it can or should be.

MEXICO CITY — Mexico’s federal fiscal response to the coronavirus pandemic follows the president’s austerity plans. But analysts fear that the lack of stimulus and relief packages might create a backlash against the country’s economy.

“Where Mexico stands out quite a bit is in its lack of fiscal stimulus, it's actually quite little,” said Alejandra Grindal, senior international economist at Ned Davis Research.

A study from the consulting firm BCA Research based on data from the International Monetary Fund or IMF shows Mexico’s fiscal response to COVID-19 is among the poorest among major economies and even compared to Latin America.

While Germany provides almost 35% of its gross domestic product to the pandemic and the U.S. about 15, Mexico provides only 7.

Grindal says Mexico is trying to keep a budget to avoid foreign debt, but this could cause a backlash, as the country’s economy contracts.

“According to IMF estimates, for example, the only countries in Latin America that are expected to contract more than Mexico in 2020 are Venezuela and Belize,” Grindal said.

The stimulus packages in the world tend to be a payback to the formal sector, but in Mexico about 50% of employment is informal, which complicates the situation, the expert explained.

But Grindal said a potential opportunity for Mexico comes from the ongoing tensions between the U.S. and China, where Mexico could result benefited. And the economists said the upcoming presidential election might also bring some opportunities if Democrat Joe Biden gets elected, as he would most likely bring a friendlier stand to Mexico.