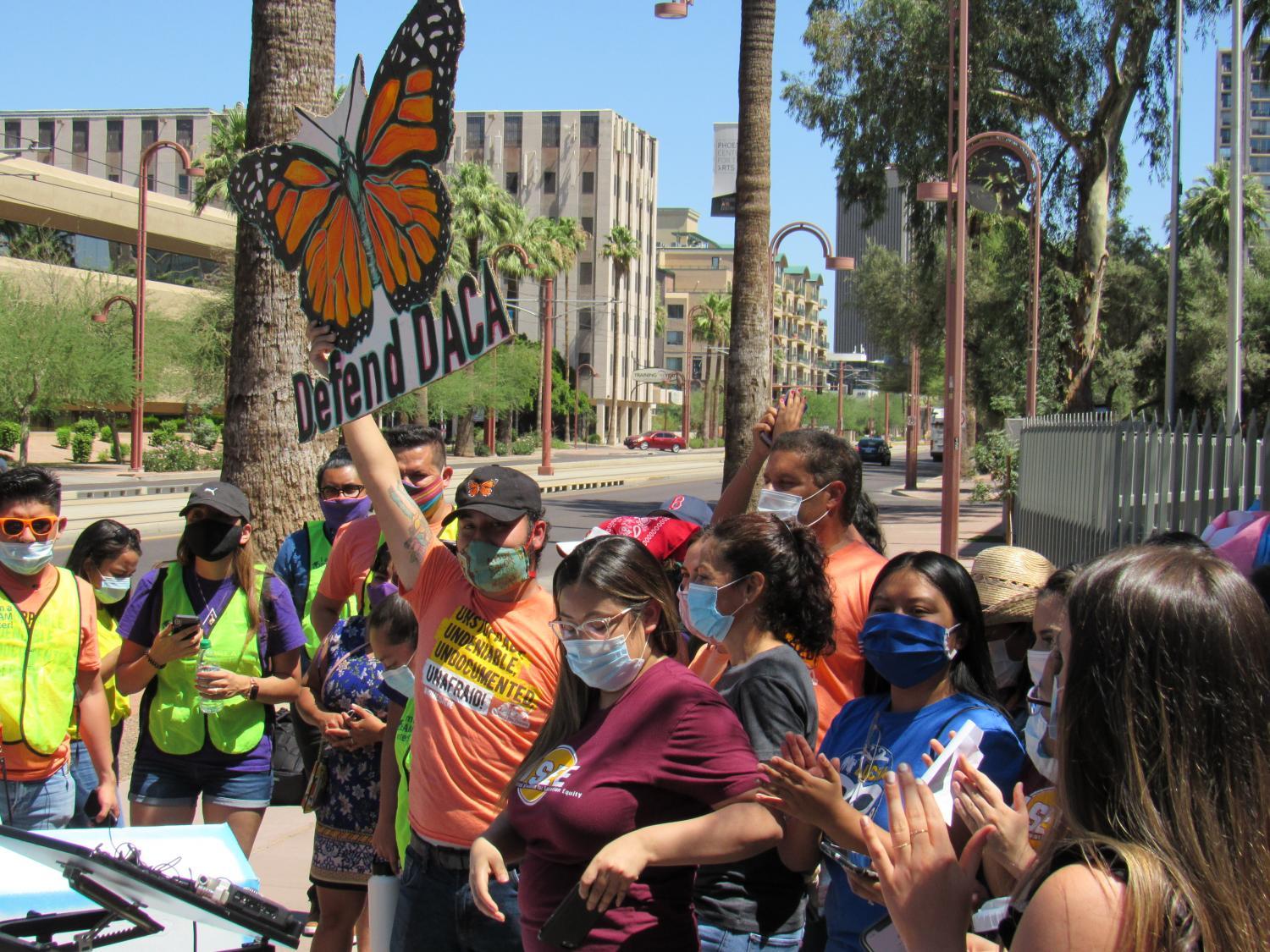 Matthew Casey/KJZZ
DACA supporters gathered outside ICE in Phoenix on June 18, 2020, to celebrate the Supreme Court's ruling to continue the DACA program.

The Supreme Court has kept alive an Obama-era program that protects hundreds of thousands of immigrants from deportation. But the high-court also said the Trump administration can still end Deferred Action for Childhood Arrivals, if it does so the right way.

DACA recipient Karina Ruiz and was part of a line of public officials, lawyers and fellow activists claiming victory outside Immigration and Customs Enforcement in Phoenix.

The Supreme Court made this a celebration for Ruiz, which she was not expecting. This place where she and other DACA recipients gathered is also where a bigger crowd marched to back in September of 2017 after a sunset for the program was announced.

Matthew Casey/KJZZ
Karina Ruiz speaks outside ICE in Phoenix after the Supreme Court kept the DACA program going on June 18, 2020.

"We have been a state of limbo, in a state of anxiety. Like we’ve been knocked down so many times," Ruiz said.

The high-court’s ruling means Ruiz gets to keep working legally as a realtor and not separate from her family, which includes grandchildren. She’s energized and says now’s the time to push for immigration reform and "provide a pathway to citizenship for DACA recipients."

The Supreme Court’s ruling is a win for about 24,000 DACA recipients in Arizona and hundreds of thousands more across the country. But this population who didn’t get a say on whether to come to the U.S. is still in limbo.

"In this circumstance, it might be more of a temporary reprieve," said Doug Ligor, a former government trial lawyer for the immigration courts, and now works as a senior policy researcher for the RAND Corporation.

He read the ruling and says it’s unclear if people will get to apply for DACA for the first time, or try to get back in. Right now the program only allows renewals.

"There is a lot of paths that the administration could take, I think," he said.

Prepared statements from Homeland Security and Citizenship and Immigration Services did not address those issues. And a local spokesperson did not immediately respond to questions.

Some Arizonans do hope the ruling will mean a second chance at DACA.

Jesus Lucero knows what it’s like to be left waiting. A glitch in their first DACA application prevented them from getting the status. Then in 2017, the Trump administration ended the program and barred new would-be applicants. No one is sure whether that’s changed now. But immigration lawyers have told clients to gather the paperwork to try. Lucero printed out that information for a new application right away.

"I’m so beyond grateful that I’m going to have another opportunity to apply for DACA. I’ve seen time and time again how much of a difference DACA can make in the life of anybody," Lucero said.

Lucero isn’t alone in that idea. Blanca Sierra Reyes says DACA is the reason she is where she is today.

"I got my master’s degree in social work, just a year ago in May, and none of that would have been possible without DACA," Reyes said.

Alisa Reznick/AZPM
Blanca Sierra Reyes, 27, applied for DACA eight years ago and has renewed every two years since. She graduated with a master's degree in social work from ASU in spring 2019, an achievement she said would not have been possible without DACA.

Reyes is a social worker at a hospital in Phoenix now. She was on the front line when the pandemic hit, helping families of COVID-19 patients prepare for what comes next. But waiting for the court to decide the fate of DACA was flooding her with anxiety about what was next in her own life. Her mom woke her up with the news — DACA was here to stay.

"She just told me in Spanish, she’s like, 'DACA vive,'" Reyes said.

Now she says she feels like she can finally breathe.

Reyes has two young sons who are U.S. citizens. The next step in her day is going home and explaining to them what this all really means.

"I’m just going to let them know that DACA is still alive and mommy is still going to be able to work. Right now it just feels like I can breathe, and I can tell them that I’m going to continue to be by their sides," Reyes said.

But Reyes says there’s still plenty of questions. She wonders what will come next for people like Lucero, who didn’t get the chance to apply for DACA in the first place. Until things become clear, she’ll keep going to work and standing ready to help fellow recipients looking for answers.