Tonalea on the Navajo Nation in northeastern Arizona is the hometown of Darrell Marks. His mother and grandmother still live there.

“That’s about five miles of zigzagging down a dirt road to get to their residence,” Marks said.

Marks said it’s always been difficult for his family to get their mail. They rely on a P.O. box at the trading post.

“There were times she only checked it once or twice a month,” Marks said. “So I was very familiar as a child growing up seeing the past due notices because my mom wasn't checking it regularly because there were other things that were a little bit more important.”

Marks said she was busy hauling water, feeding the family and working a full time job.

If they miss the mail-in ballot deadline the drop box is 100 miles away in Flagstaff. And in November dirt roads can become muddy and impassable.

Voting in Indian Country has long been problematic primarily because of the lack of street addresses on many reservations. Now state officials are pushing for mail-in balloting to prevent the spread of the coronavirus. That’s made the election process for Native Americans even more complicated.

“We saw time and time again that there were just unreasonable distances people had to travel in order to cast their vote,” says Jacqueline De León, a staff attorney at the Native American Rights Fund and a member of the Isleta Pueblo.

The fund recently held field hearings all over Indian Country to better understand the obstacles to voting that Native Americans face and released a report with its findings.

In Alaska it’s not unusual for the mail to be delayed if weather prevents planes from landing in remote villages. In northern California, many Karuk tribal members live in RVs, which are considered temporary housing by election authorities. And in Arizona, New Mexico and Utah, the Navajo Nation has sued over the lack of translators. Navajo isn’t a written language. So there’s no translation on a mail-in ballot. And De León says that’s a major problem given the push to vote by mail this election because of the COVID crisis.

Another registration hurdle is Internet access. More than a third of Native Americans living on tribal land lack broadband according to the Bureau of Indian Affairs. On the Navajo Nation it’s two-thirds of the population. As the tribe works to stop the spread of the coronavirus, no one is out trying to register people in person.

“Those events are not happening right now,” said Patty Ferguson Bohnee who directs Arizona State University’s Indian Legal Clinic and leads the Arizona Native Vote Election Protection Project. “The tribes are not encouraging people to come onto the reservations right now because of the pandemic. So what are the alternatives? Are there alternatives?” 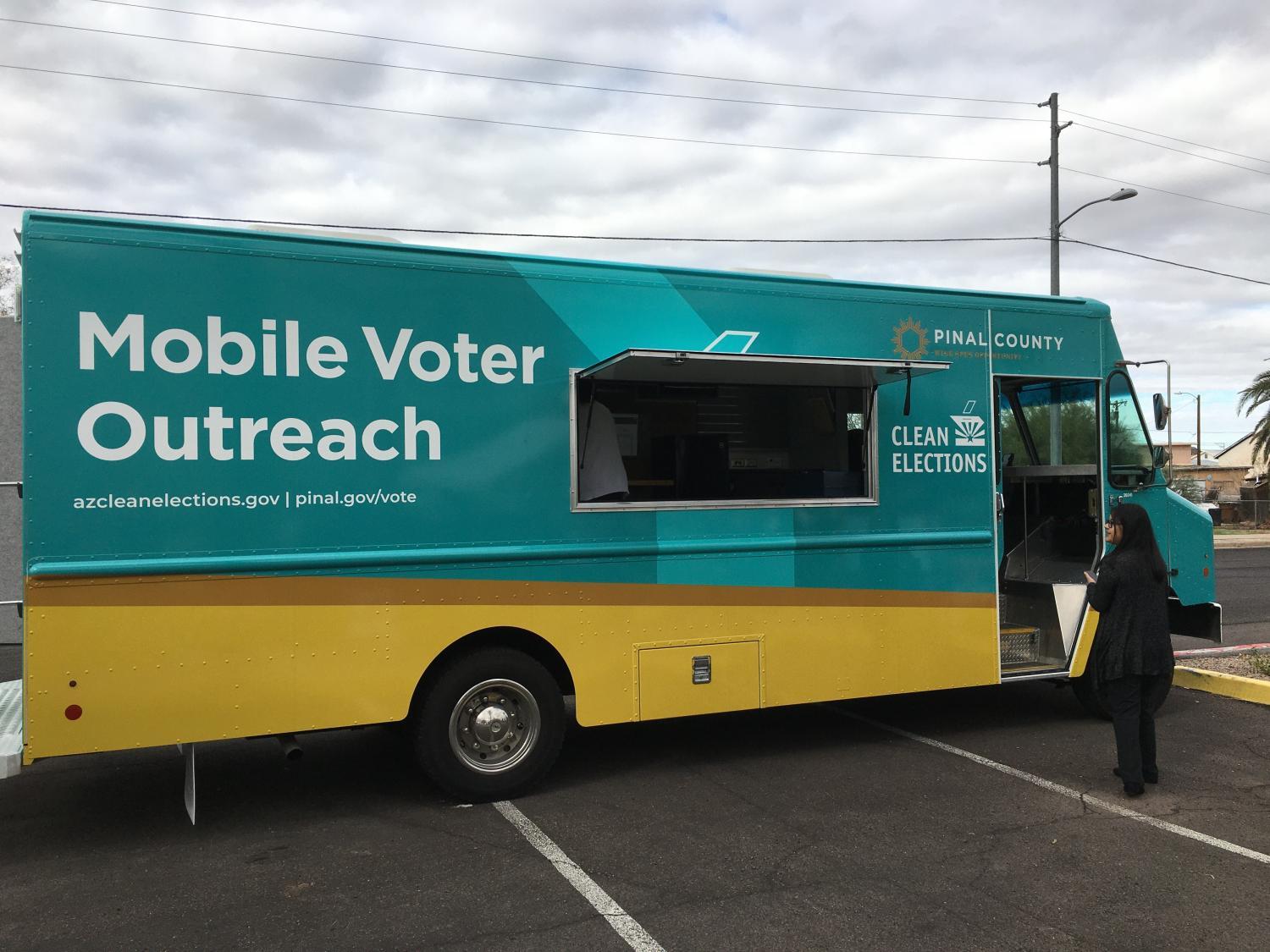 Anthony Smith
The Pinal County mobile voter-outreach van is designed to get people to register to vote as well as give them general information on voting.

Election officials have to get creative when it comes to registering and voting.  Arizona Secretary of State Katie Hobbs said voting early will be key. She points to one county that plans to use a mobile voting booth.

“It was a food truck and they converted it into a voting van,” Hobbs said. “They can do curbside voting where two of the poll workers from different parties come out and help the voter vote at their car."

The problem now is spreading the word. The Secretary of State’s office has created bilingual radio ads in Navajo and Spanish.

“Those early voting options don't do any good if we’re not telling voters that they’re there,” Hobbs said.

Hobbs said the farther someone has to drive — especially if they don’t have gas money — the less likely they are to vote.