While In Washington, Mexico's President Praises Trade And Trump 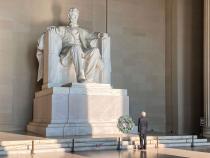 Office of the President of Mexico
Mexican president Andrés Manuel López Obrador visited the Lincoln Memorial in Washington, DC, prior to his encounter with president Donald Trump on July 8th, 2020.

During their speeches at the White House, prior to signing a statement of friendship and collaboration, they praised each other but said nothing about current conflicts.

The U.S. president said many didn't want the meeting to happen, be he has supported AMLO since his election in 2018.

"We have both fought against corruption and give power back to the people," Trump said.

Trump and AMLO also congratulated each other for the US-Mexico-Canada Free Trade Agreement (USMCA). They said friendship between the two nations is better than ever, and that the USMCA will build self-sustaining economies that’ll bring prosperity to the workers.

"Both nations have been distant neighbors sometimes, but endearing friends, too," said the Mexican president.

The presidents highlighted the close relationship between late presidents Benito Juárez and Abraham Lincoln, as well as the importance of the millions of Mexicans living in the U.S..

"I must thank you, president Trump, for your understanding and respect towards me, as a president, but even more, towards Mexicans," said AMLO.

AMLO ended his speech with "long-live"chants to Canada, the U.S. and trade, as well as with three "¡Viva México!". Trump replied: "That's fantastic".

Critics on both sides of the border, including Arizona representative Raúl Grijalva, say AMLO has turned into Trump’s collaborator.

"This is a slap in the face to Mexicans, Mexican Americans, and all of the migrants living just over the U.S. border on Mexican soil who are fighting for their lives as they await their chance at asylum in the United States,” Grijalva says on a statement.

Many who question AMLO's visit and speech say he seems to forget that the U.S. president demonized the Mexican people, builds a border wall and pressures to stop migrations.