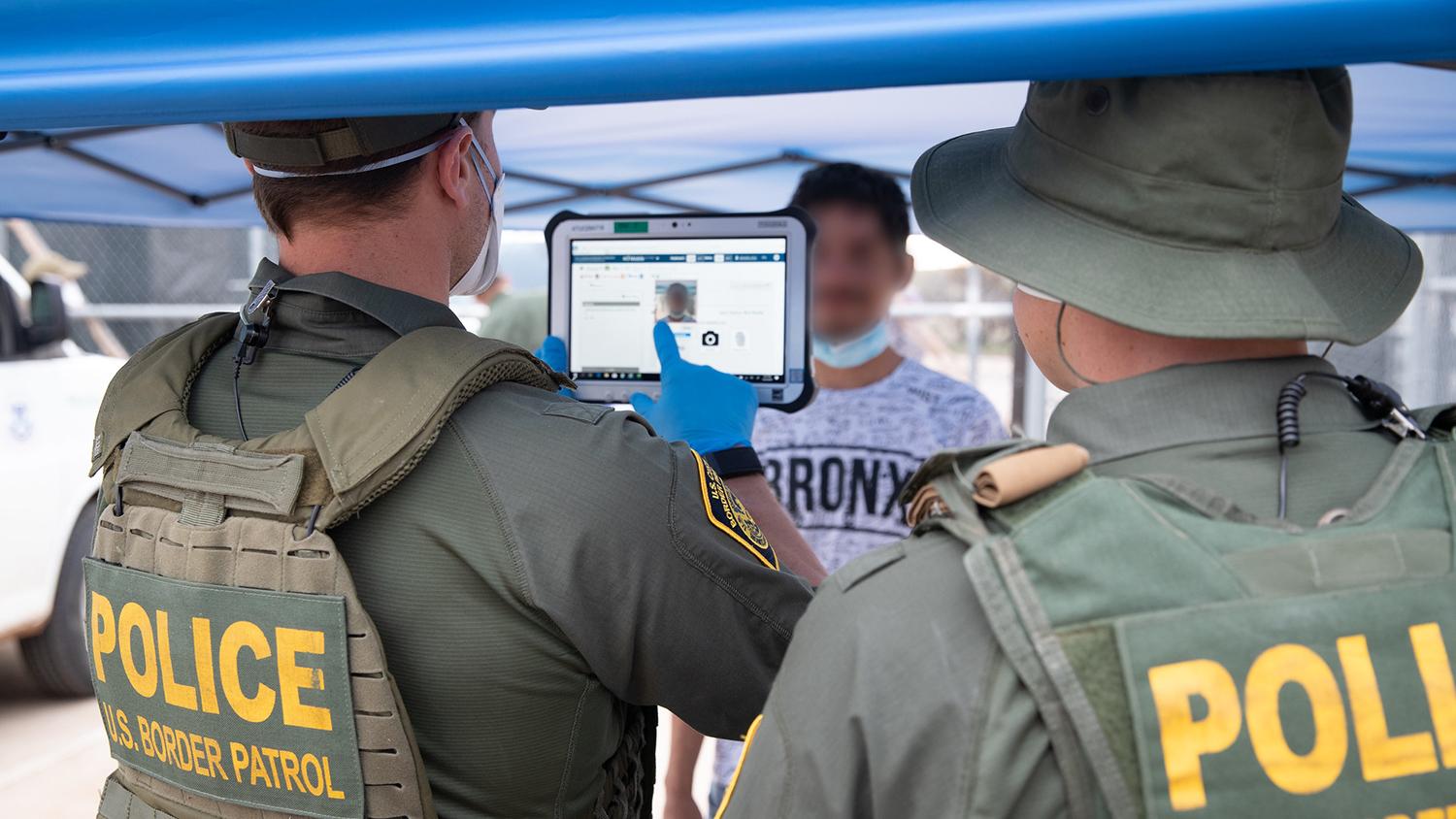 Jerry Glaser/U.S. Border Patrol
A U.S. Border Patrol agent uses personal protective equipment as he prepares to take a photo of an individual encountered near Sasabe, Arizona, on March 22, 2020.

LAUREN GILGER: The United States government has implemented severe measures against illegal immigration during the coronavirus. One rule establishes that Border Patrol agents can now deport people swiftly without any sort of court process. But still, the Homeland Security Department was caught off guard by a surprising rise in cases last month. And with me to discuss the rise from the Fronteras Desk in Tucson is Michel Marizco. Good morning, Michel.

GILGER: OK. So tell us what happened on the border last month.

MARIZCO: Right. So it was an interesting uptick. The number of apprehensions went up. And apprehensions doesn't mean the full embodiment of everyone trying to cross the border. It just means those who were caught, right? But it's always a good indicator of what's happening in terms of undocumented immigration and people crossing the border illegally. That would also include people seeking asylum at the border. So yeah, that, that number went up pretty significantly — just about double of what it was in the springtime. Keep in mind, summertime numbers tend to drop because it's so hot. Springtime is usually the time of year when people really try to enter the U.S. through the southwest border. That wasn't the case in June.

GILGER: So the government has implemented this Title 42 expulsion rule in March. This is different from deterrent policies that used to lead to criminal prosecution. But deterrence has been at the center of border security operations here for decades. Is that going away?

MARIZCO: Right. So they always called it 'prevention through deterrence,' you know, placing agents at high profile areas sprinkled across the border in hopes that that would stop people. It didn't really work in the past, though prosecutions did. But now it certainly seems that any sort of deterrence is off the table in terms of effectiveness. What we saw, for example, in May and then again in June was a re-hardening by the Trump administration of policies at the border. We'll talk about one here in a second — the CDC rule. But also an increase in pushing for Mexico, Honduras, El Salvador to stop people before they get here. It's clear from apprehension numbers that that hasn't been effective.

GILGER: What other strategies then is the government implementing?

MARIZCO: So one of them so far is that they want to implement an asylum rule or rather, for people seeking asylum, that would expand the definition of those who try to enter the country and make it so that if officials could determine that, they could — and I'm talking could — spread a contagious disease, i.e. coronavirus, that they would not be able to apply for asylum. So that's a new rule. Title 42 of the Centers for Disease Control and Prevention health care protocols. That was implemented in March, and this was when they could literally grab people who were apprehended right at the border and deport them right then and there within minutes rather than hours. The had it down to, I think, less than an hour of time for a lot of these folks. Again, these are very hard, very severe limitations or restrictions. And yet those numbers are climbing.

GILGER: Yeah. So and also, as happens nearly every year, it's the summer, the temperatures are rising, and we see migrant deaths continue in the desert. What's the situation like this year?

MARIZCO: So there's been more than a thousand people. Again, this is another number that's been climbing. There's been more than a thousand people that were rescued by Border Patrol agents in southern Arizona. You know, these are people who are hitting sensors that are pretty well within the U.S. Some of them right at the border, but many of them also within several miles of the desert that they crossed looking for help. And that doesn't include the number of people who, for example, were rescued by No More Deaths and some of the other nongovernmental organizations who are working in southern Arizona.

GILGER: All right. That is KJZZ's Michel Marizco joining us now from our Fronteras Desk in Tucson. Michel, thank you so much.

MARIZCO: Thank you for having me.