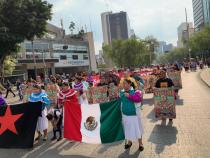 Jorge Valencia/KJZZ
A rally in Mexico City to conmemorate the disappearence of 43 students in Ayotzinapa in Mexico City on September 2019 was disrupted by groups of so-called anarchists.

MEXICO CITY — In 2014, a group of college students hijacked buses in Mexico to go to a protest in Mexico City. Forty-three of them disappeared, and their mysterious absence spurred a movement against government oppression. Now, a new clue shines light on the case.

The 43 students from Ayotzinapa Rural Teachers’ College disappeared after a confrontation in the state of Guerrero.

Some theories say the local police and the military either participated or refused to prevent the abduction. Another says that a local mayor colluded with a gang to make them disappear.

The previous government’s version said that a drug cartel killed the students and incinerated them in a dumpster, mistaking them as foes from another cartel. But new evidence is pointing in another direction.

According to the current administration, the remains of one of the students were recently found far from the dumpster. The current prosecutor is also investigating alleged cases of torture by the police. Authorities from the previous government have been arrested.

The investigation continues, but the new line is challenging the previous official version.