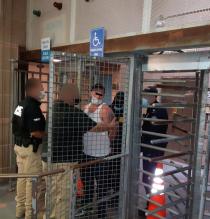 For the second time in less than a week, authorities in neighboring Sonora, Mexico, have detained a suspect wanted for murder in Arizona.

Altland had been on the run since November, wanted by the Pima County Sheriff’s Department on suspicion of first-degree murder, according to a release from the Sonoran Attorney’s Office. He was captured after attempting to purchase two vehicles with high denomination U.S. currency in Sonora.

Sonoran authorities turned Altland over to Mexican immigration authorities in Nogales, Sonora, who delivered him to the U.S. Marshals Service at the port of entry.

The Pima County Sheriff’s Department confirmed he was booked into adult detention Tuesday and charged with first-degree murder in connection with the Nov. 18, 2019, death of 46-year-old Eric Duncan McCormick.

Just days before, Sonoran authorities also detained a man suspected of killing a teenager during a 2018 armed robbery in Avondale.