At First, ICE Cooperated With The Filmmakers Behind Netflix's 'Immigration Nation.' Here's Why That Changed

STEVE GOLDSTEIN: Immigration and Customs Enforcement, or ICE, has attracted significant attention during the three and a half years of the Trump presidency. As the administration has aggressively changed immigration policies. During the last election cycle of 2018, the phrase "Abolish ICE" was brought up, and encouraged by some progressive candidates and organizations. Now ICE is the center of a new Netflix documentary series called "Immigration Nation." 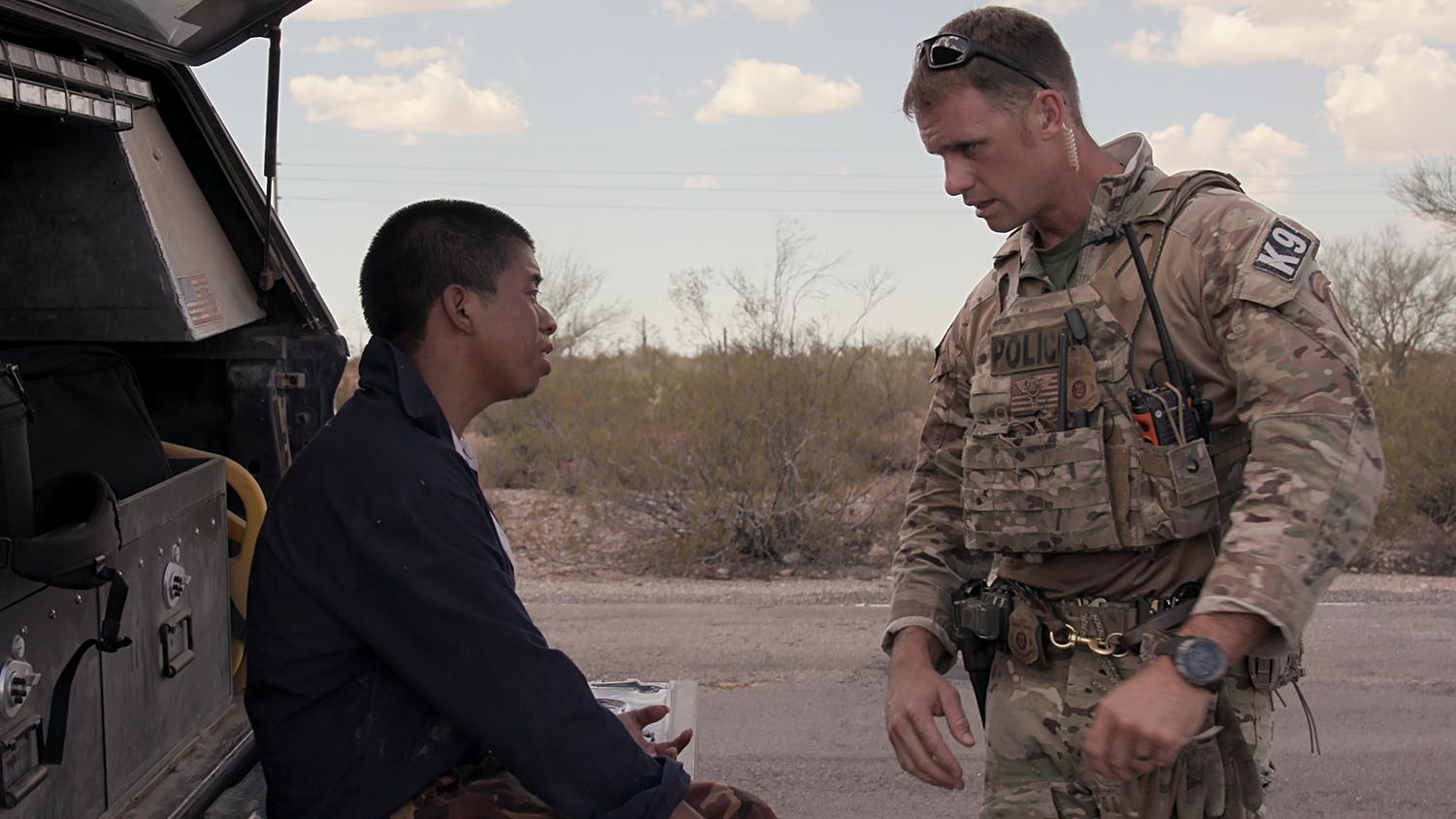 Netflix
A still from "Immigration Nation" Episode 5 on Netflix.

ICE AGENT: I don't really, I don't do collaterals. I just don't think it's right. Like, if I get somebody that's not cooperative, it's a different story. But if you let me into your house and talk to me, I'm not gonna roll your fingerprints and arrest you just because you're here illegally. I know it's my job, but I've, you know, I got guys that are aggravated felons that I'd like to catch — I don't care about the guy that's minding his own business and cooperating with me. Yeah, what's up, man?

BOSS: You need to start taking collaterals, man. I don't care what you do, but bring at least two people in.

ICE AGENT: OK. That's my boss. "Bring at least two people in, and I don't care what you do." He knew you guys were with me, right?

GOLDSTEIN: When the project began, ICE cooperated with the filmmakers, but that changed and led to efforts to stifle the production. I spoke with the filmmakers Shaul Schwarz and Christina Clusiau recently, and began by asking whether there were any limits that ICE put on them when work started on the documentary.

SHAUL SCHWARZ: Not really. It was sort of a carte blanche into the agency. We were super grateful. You know, they just introduced us around, and it was really up to the people in the field to see if they want to participate. And we would take different trips to different field offices. I mean, some just didn't want to participate, but a lot did. And we would just kind of jump in there, and basically, depending on the place and people we met and different units kind of assemble how we would tell our story. They were generally really open about — there were places, like when we got to California, people just didn't want to show their face, and they told us things like, "Listen, I don't really tell my neighbor what I work in." So we were like, "OK." We thought it was interesting, but didn't know how build the story. And we had so, such unique access into different units around the country to just, we just kind of went with the ones who let us get in there and we stayed the distance.

GOLDSTEIN: What surprised you about some of the people that you met? Because one of the things that has struck me is that there are some people who are extremely hardcore about enforcement and there are others who are doing their jobs, but feel like at the same time, these are human beings and they want to make sure they treat them like human beings.

CHRISTINA CLUSIAU: I think you hit the nail on the head there. I think that's what I definitely felt during this entire process, is that because policies were changing so quickly, there was a wide array of ICE officers, some that really believed that this was the direction to go with enforcement and others that maybe didn't agree so much with it, but they still were compelled because this is a job that they were hired to do. But I think daily they were grappling with what was happening in the country. And so I think it was a real variety of individuals that we encountered and met. And once you start to spend time with them, you know, you do find a commonality whether or not you agree with their policies or what they believe.

SCHWARZ: ICE is this unique federal agency because it really shifts — it's what it does depending on the politician that comes into power — more than any other really law  enforcement agency. So I think when Trump came in, there was some excitement in the agency. We would hear a lot like, "The gloves are off. We got support. You could do this." There certainly were people who doubted it. And I think as time went by, it really shifted because I think they, on one hand, felt supported. On the other hand, let's face it — they became one of the most hated, if not the most hated agency in the country. And I think, to a degree, the officers, boots-on-the-ground kind of, were put in very hard positions, particularly after zero tolerance hit.

Netflix
A still from "Immigration Nation" Episode 5 on Netflix.

GOLDSTEIN: Well, let me move on to ask you about the situation you guys find yourselves in as documentarians. When did it seem that perhaps the enthusiasm of ICE to be involved in this project and support it, when did some of that start to crumble a bit?

CLUSIAU: You know, I think for two and a half years, we had really good access. We had a really nice working relationship because we were working with different field offices throughout the country on the ground. And we were really involved in the lives of these officers. I think the shift happened when we started reviewing all of the pieces. So when we submitted reviews because we had what's called a multimedia agreement, which is a general agreement that most productions have with government agencies in order to operate like we did, they were able to review on three things: Factual inaccuracies, law enforcement-sensitive information — such as tactics that weren't already publicly known — and anything that's Fourth Amendment privacy violations. But what had happened is when we started to review the process, ICE themselves didn't really like what they were seeing, and they were trying to editorialize content and push more beyond those three things. And so that became very challenging, and we would push back, and luckily we were able to overcome. We had the resources. We had the legal backing to be able to push back and say, "No, this is not correct." In the end, our First Amendment rights were able to prevail in the sense that we were able to put the show out there that we initially had intended to.

SCHWARZ: I think it's unfortunate. I don't think that our relationship with ICE individuals — really in the field and the people we spent so many months and years in interview rooms and their cars and detention — you know, it's an emotional subject. We never agreed to everything. There was always hard discussions, but we had a really good working relationship. And it was unfortunate that it took the turn that it did. And I think to some degree, we saw how the system as a whole really kind of grinds away at people — grinds away at immigrants' rights, grinds away the ability to fight back. And so when the review process kind of happened, it almost felt like we'd known this side, but we never had to experience it personally. And to some degree, we were much more privileged than an immigrant sitting in a detention, needing to fight the system. But there was a weird parallel because we'd spend so much time in there to suddenly be, had that twist in the relation happen. And yeah, I think bottom line is we wanted to tell the show of the reality we saw. We got to tell that show, and we're proud of it. And unfortunately, it had to come with a legal fight, and we prevailed.

GOLDSTEIN: So you two had to take steps, including using encrypted texting and installing security cameras, hiding the master footage. Give me an idea of just what that was like to try to complete a project that you've been working on for years that you believe in and then to have to take tactics like this.

SCHWARZ: It was tough. It all, also kind of, things tend to happen one, two, three, together. It happened, and then COVID happened. And we were just trying to finish the edit, and everything kind of hit us together. And it was definitely emotional. And it's scary. It's scary to be in a legal fight with the U.S. government. But, you know, I think it also kind of makes you kind of toughen up and know that this is a moment and stand for your rights as a journalist and kind of believe in the mission. And I think we always kept our eye on the ball in terms of saying, "Listen, we're not going to take a line. We want to be fair to everybody that's in there. ICE agent, immigrants and just kind of present all sides." And so under all that stress and all the craziness, we tried to remember what's relevant to kind of push forward. And, you know, I think, like we said, ultimately it worked out, and I think we're proud of that.

GOLDSTEIN: OK, Christina and Shaul, thank you so much for talking with me about "Immigration Nation," which is available right now on Netflix. Guys, thanks so much.

CLUSIAU: Thank you very much.

SCHWARZ: Thank you so much. We appreciate it.