Mexico's Entertainment Industry Is In Pain 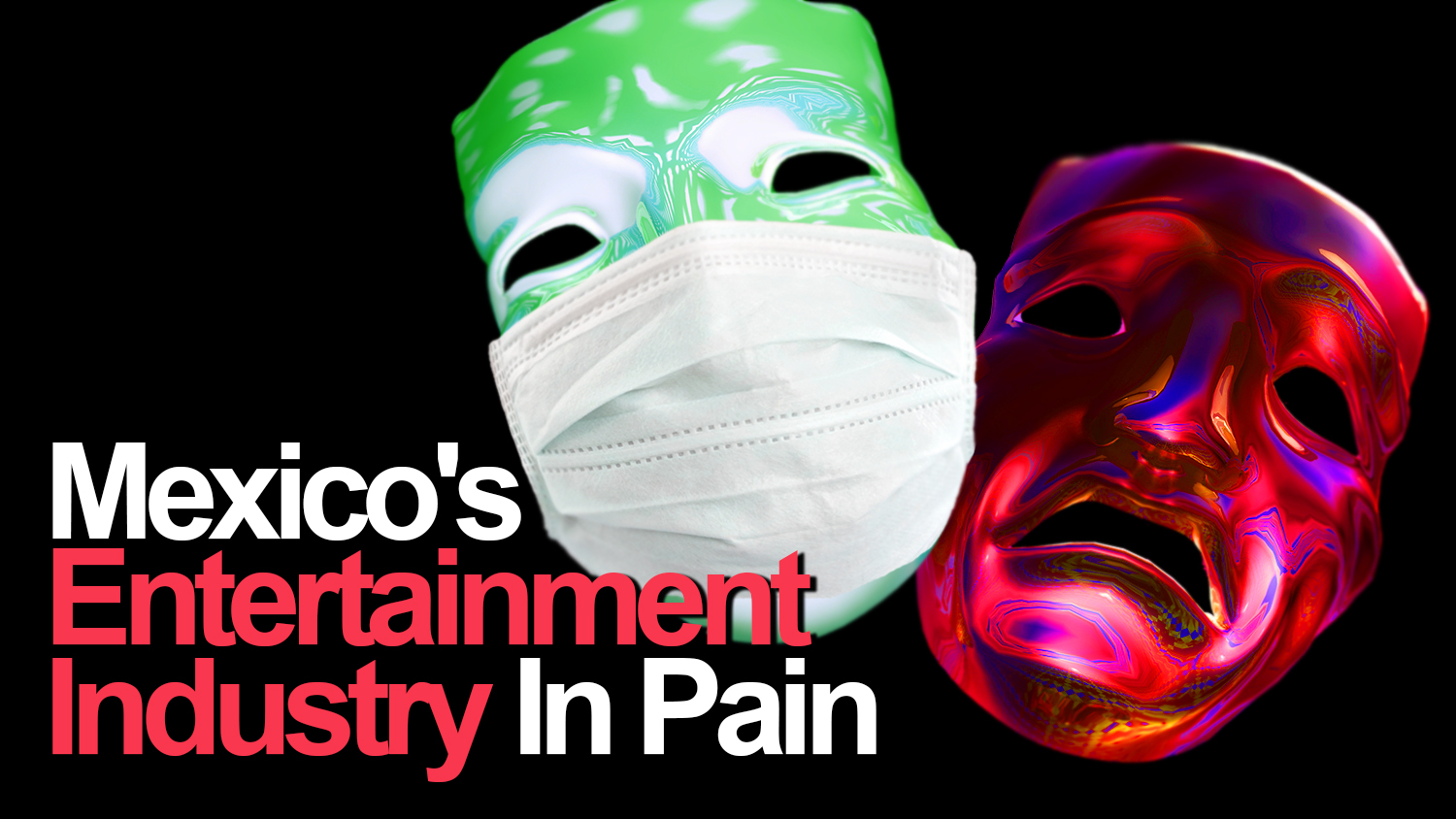 Mexico has become a growing hub for big theater and film productions, keeping a tight relationship with the United States. But the pandemic is putting at risk the present and future of these entertainment industries — and the income of millions who depend on it.

The Show Must Go On

Before the pandemic, the theater industry in Mexico was growing steadily, becoming Latin America's Broadway and hub for many U.S. productions. But now, the industry and its workers are trapped within a crisis that might be felt forever.

Mexico has an old theater tradition. Recently, a wave of productions transformed it and brought a new boom to it — until the coronavirus pandemic began.

“The real pandemic is about to begin for those of us involved in live entertainment,” said Guillermo Wiechers, vice president of the Mexican Society of Theater Producers.

Before the pandemic, the theater industry in Mexico was growing steadily, becoming Latin America's Broadway and hub for many U.S. productions. 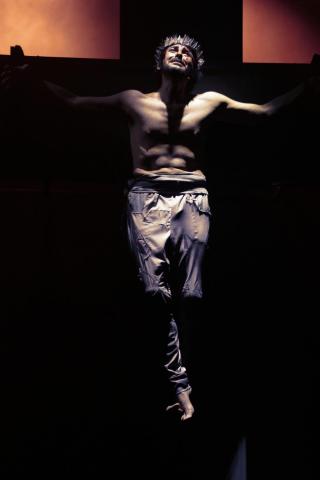 But now, the industry and its workers are trapped within a crisis that might be felt forever.

One of the biggest Broadway musicals was being performed by well-known Mexican singers and actors: "Jesus Christ Superstar" — or "Jesucristo Superestrella" in Spanish.

It was one of the most successful plays in Mexico — until the pandemic struck.

“It’s become an absolute nightmare, because priorities do not include us.” Wiechers said, who is also involved in the production of "Jesucristo Superestrella," among other blockbuster plays and musicals.

“Twenty million seats we haven’t sold; 10,000 families depend directly on what they earn from the theater,” Wiechers said, noting that the business is not only about the glamour, but also the source of income for many, including those who earn tips, like ushers.

According to the producer, the Mexican theater industry has lost about $1 billion since theaters closed in early March, even before the official lockdown.

Wiechers said the government hasn’t provided any relief; not even tax discounts. Instead, authorities “suggested” producing plays with three actors or fewer and using open amphitheaters and masks, like the Greeks did in the past.

“I don’t want to offend anybody, but those measures are not sensitive at all,” said the producer.

Wiechers says the government also suggested video streaming, but he says the model doesn’t work for the theater, where many expenses are involved, including royalties to international companies.

“For example, we tried to reach the authors of 'Jesus Christ Superstar' to ask them for permission to broadcast our show. Their answer was: Not at all.” said Wiechers.

Wiechers said the industry survived from the H1N1 virus crisis, but the new coronavirus is bringing them the hardest time in their lives.

“We don’t know, at least in Mexico, who will survive, and who won’t,” he said. 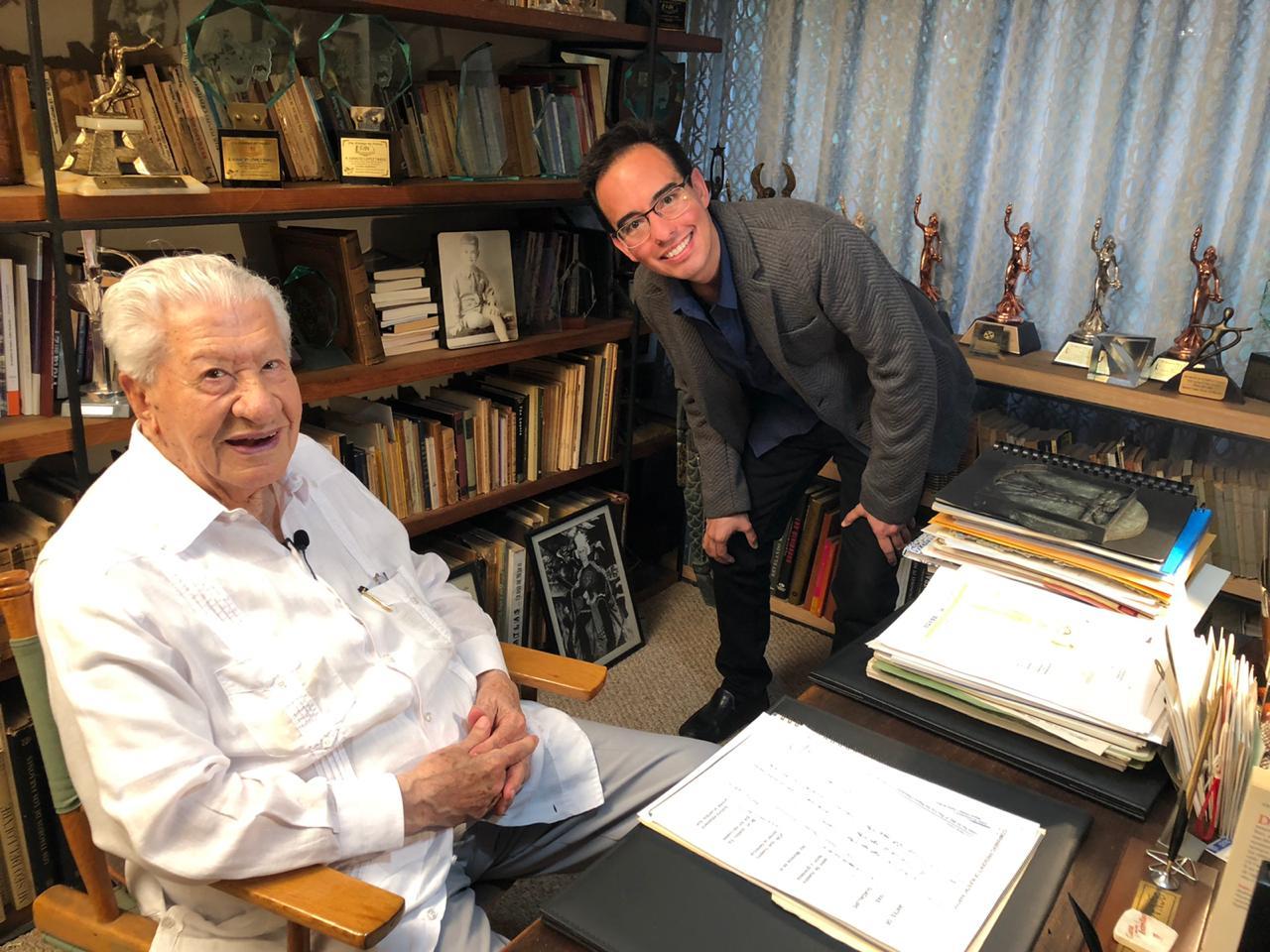 Sergio Mayer is one of the politicians trying to bring a solution. He’s a congressman leading the Culture and Film Commission.

Before, Mayer was a producer (bringing artists like Bob Dylan to Mexico), a telenovela actor and became famous in the 1980s singing in the bubblegum pop band Garibaldi. And Mayer says that experience made him more sensitive to the magnitude of the current problem.

“The pandemic affects cultural industries and, with it, tourism,” Mayer said.

Many travelers visit places like Mexico City, one of the cities with more theaters in the world, just to watch live shows.

"We have to work together to rescue our country's economy and culture."
— Sergio Mayer, Culture and Film Commission

“The bill would allow the use of money gained by auctions of confiscated art to help reactivate the culture and arts,” said Mayer..

But Mayer says it’s also a moment to be resilient. He says actors shouldn’t earn a lot of money and productions should be low-cost.

“We have to work together to rescue our country's economy and culture”, he said.

Mexican president Andrés Manuel López Obrador (from whose party Mayer is a member), has called for austerity measures, offering limited support to specific groups, while asking business owners to keep paying their workers.

Adriana Beatty is the technical director of one of the largest theater complexes in Mexico City and pioneer in large Broadway productions in Mexico. 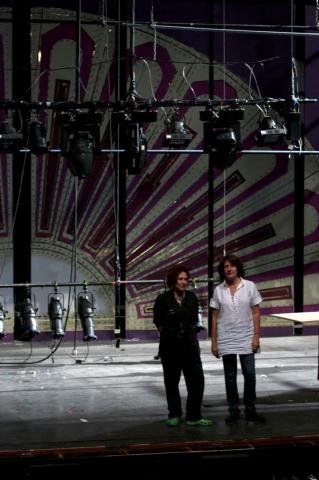 “My full name is Adriana Gardner Beatty. Gardner is because of my father, he liked Ava Gardner, and Beatty, well, he’s Beatty!”

Not that famous Beatty, she joked.

She recalled that the boom of musicals in Mexico started in the 1990s, with plays like "Beauty and the Beast" and "Phantom of the Opera," and growing every year — until the COVID-19 virus struck.

“We’re suffering a lot, because it’s not that if I don’t work in the theater, I go to work in another thing,” Beatty said.

Beatty says one of the theater technicians she knows created prototype ventilators and tried to offer them to the government, adapting to the current crisis. And for her, that’s an example to follow.

“We have to be optimistic, because if we’re not optimistic, we're going to drown,” said Beatty.

The technician said she knows people living off their savings, and has even heard bad news about colleagues dying from the coronavirus.

“We have been notified of the deaths of people that have worked with us, and that stinks," Beatty said. "That’s hard."

But she says that the industry will grow stronger by sticking together and innovating, like it did with the recent success of a children’s play, "Paw Patrol," in a parking lot.

“The show must go on, and the show will go on!” Beatty said.

And for her, this crisis, like many others in the past, will also pass.

Mexico and Arizona have a history and close ties with Hollywood. And as the streaming industry and a new wave of filmmaking was bringing growth of this industry into Mexico, the pandemic is putting its expansion at risk.

This is a story about those making stories.

Mexico has become a hub for TV series and film productions, keeping close ties with Hollywood.

Video streaming and a new wave of filmmaking was bringing growth of this industry into Mexico, but the pandemic is putting its expansion at risk.

“Mexico is now the number ten in the production of films in the world,” said Tábata Vilar, head of the National Chamber of the Film Industry in Mexico (CANACINE).

“We made 200 films this year; and the interesting thing is half of these films were made with public money, and the other is with private money,” Vilar said.

She said Mexico is not only among the top audiovisual producing countries, but also the fourth largest movie theater market in the world.

Vilar said more companies are producing in Mexico, while many U.S. studios film here every year, including the growing presence of streaming services like Amazon or Netflix. 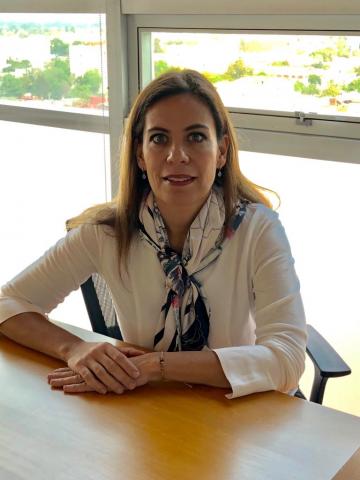 Canacine
Tábata Vilar is the general director of the Mexican Chamber of the Film Industry, CANACINE.

But Vilar says the government is still restricting the number of workers in productions. And the austerity policies of the current administration threaten to cut certain fiscal stimulus and public funds for filmmaking.

“It’s very clear that the government is not making any policies or anything to help with the pandemic,” Vilar said.

The CANACINE director says they’ve created hygiene and health protocols, while organizing the productions. Buy-only ad makers may shoot under the restrictions, as the crew number is very limited.

Mónica Vargas is partner and producer of Traziende Films, one of the current top movie and series producers in Mexico — including one of the most popular streaming series in Latin America: "Club de Cuervos" or "Club of Crows."

Her company is one of Netflix's first partners in Latin America for Spanish-Language content. In addition, they’re planning to release their first horror movie, "Sin Origen," by late September.

But the pandemic is standing in their way. Most movie theaters are still closed or have limited capacity and opening dates might change.

“But the important thing nowadays is to reopen and to bring safety to the audience,” the producer said.

Vargas says the pandemic didn’t make them stop or cancel shootings, as their current projects are in the early stages, easy to handle remotely.

“But many projects and many, many people had to stop and are on big trouble: to stop a production in the middle of it is a very complicated situation, with many expenses,” Vargas said.

But the crisis is making them reinvent their content.

“So now we’re trying to write scripts with probably less actors or less locations," she said. 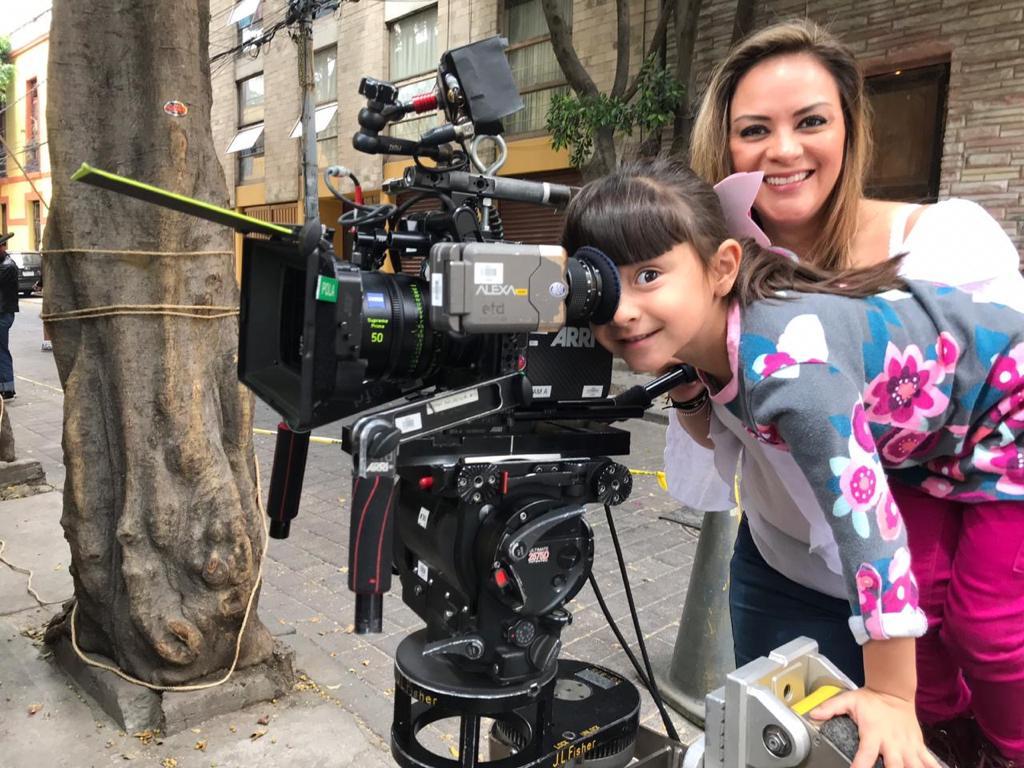 This fund gathers donations to be distributed to those in the industry who are struggling due to the pandemic.

“Whatever happens, Mexico will still have one of the most important and professional filmmaking industries in the world,” Vargas said.

Back On The Road

“I was working on a TV show for Amazon that we had to stop,” said Mónika Rubio, an experienced freelance production coordinator.

Rubio’s experience includes working with many U.S. companies in Mexico for films such as: "Bad Boys for Life," the "Narcos" series and "007 Spectre."

“We were preparing, we were reading," Rudio said. "You have no idea how many protocols I’ve read. So we actually were prepared for shooting, but government said: No way."

She said she hopes U.S. filmmakers keep coming to Mexico. She says they like it in Mexico because the country has good weather, settings, facilities and labor — and all of this for far less money than up north.

"And we work like a lot of hours!” said Rubio.

But the coordinator said she’s disappointed with the current government. And it was the private sector, not the state, that helped people like her who suddenly were unemployed.

“Amazon gave us money. And what we have from the government? Nothing,” she said.

But Rubio says the pandemic is becoming an opportunity to do things differently, like shooting remotely.

“That’s so weird. The director is in his place using his cellphone that is connected to the production,” Rubio said.

The coordinator says Mexicans are used to innovate, do more with less and wear different hats. And the pandemic won’t stop them.

And Rubio says brain drain in the industry might continue as the government does nothing, but Mexicans will always come back to help. 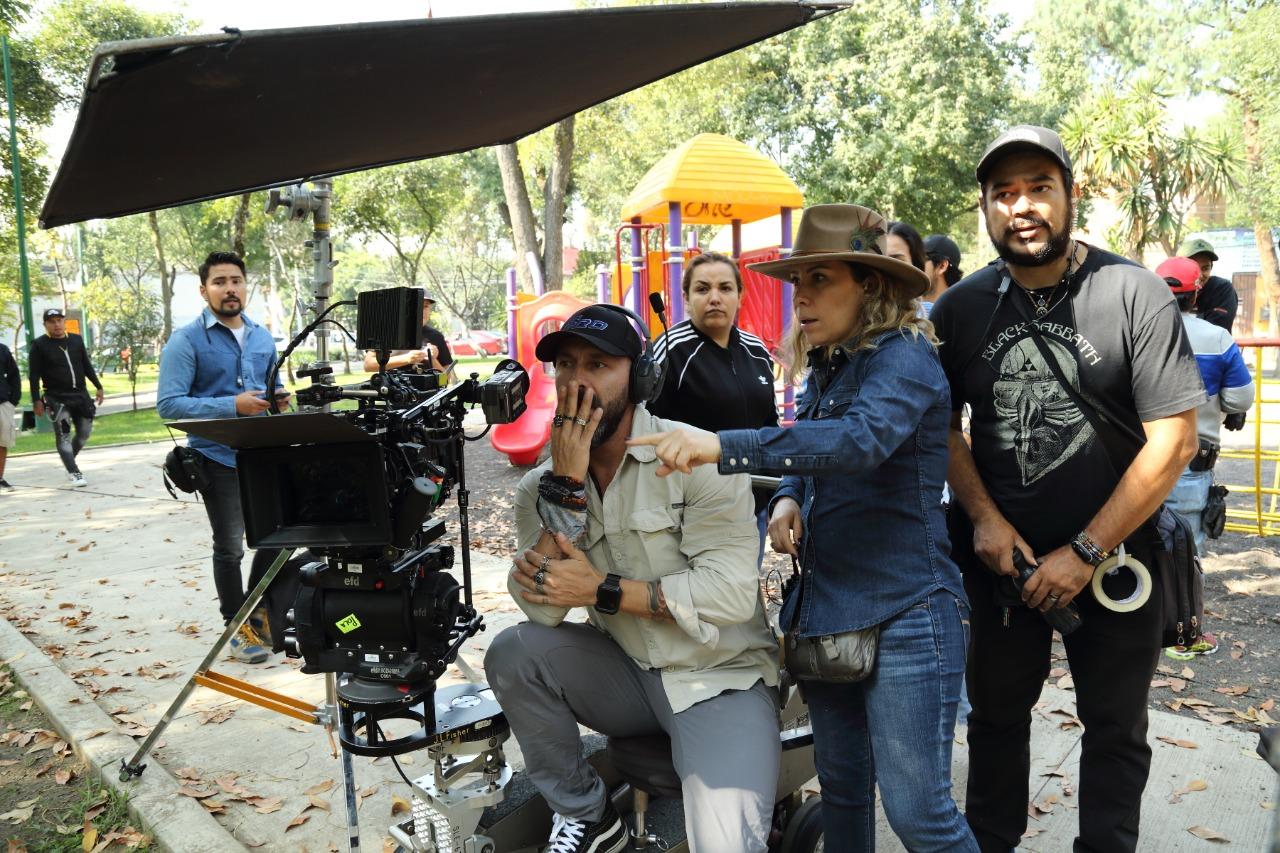 Mónika Rubio
Production coordinator Mónika Rubio (right, wearing a hat) at one of the productions in Mexico where she's collaborated.