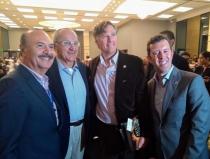 Rodrigo Cervantes/KJZZ
Christopher Landau (brown coat), U.S. ambassador in Mexico, at a reception in Mexico City on Sept. 28, 2019. At his left, Larry Rubin, president of the American Society of Mexico and Mexican Undersecretary of Foreign Affairs Jesús Seade on his right.

MEXICO CITY — The Republican National Convention is underway and President Trump has been nominated for a second term. In Mexico, Republican expatriates applaud the decision, despite the controversial image that the president has in the country.

Larry Rubin represents the Republicans in Mexico. He said president Trump’s capacity to solve the issues that affect Mexico and the United States are attracting more expat votes.

“I’ve seen a lot more Republicans wanting to send out their vote more than the previous elections,” Rubin said.

Rubin said some media have tried to portray Trump as a racist, but he has proven to be capable of building strong agreements with Mexico on relevant issues, like trade and immigration.

According to Rubin, the Republican delegation in Mexico is helping get voters registered, while monitoring the election process.