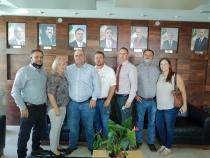 Bryan LeBarón
Members from the LeBarón family at the Office of Mexico's Secretary of Security.

MEXICO CITY — In November, nine women and children from the LeBarón family were murdered in a brutal attack by gunmen on a road in Sonora, Mexico. A new update on the investigation is pointing to almost 20 new suspects — some of them former members of the security forces.

Bryan LeBarón and other members of his family met with Mexico’s secretaries of State and Security, as well with the Attorney General's Office for Special Investigations on Organized Crime.

LeBarón says 14 people are in custody, most of them facing official charges on drug and arm trafficking and homicide. And there are warrants for 19 additional suspects.

“Many of the suspects are ex police officers and ex military. That is confirmed,” LeBarón said.

The activist said there are two people detained in the U.S., and that it’s very likely that more extraditions could follow.

LeBarón says the family is grateful for the effort in their case, but there are way too many cases in Mexico that don’t get any attention.

“The government’s strategy is incomplete, it is not holistic, and there’s a lot of work that needs to be done," said LeBarón.

And, unlike what the Mexican president stated last week, the crime they suffered is still far from being solved.

“To say the case is almost solved closed is incorrect,” the activist said.